Lana Myers in Newton, Kansas, is working on a book about Kansas poet May Williams Ward. She sent this quotation from Ward about meeting Carry Nation in 1901 at a fraternity house in Lawrence. This is from unpublished manuscript in the Wichita State University collections:

Kloefkorn’s verse, written in vernacular language, celebrates Great Plains life. He is one of the first writers, along with Kooser and others, to define a Midwestern voice. Born, raised, and educated in Kansas, he often writes about rural life with understated wit.Kloefkorn is especially a storyteller.
In this poem about Kansas character Carry Nation, he tells history from a young person’s point of view. Contrasts invigorate the story: the “full-fleshed” photograph breaks the wallpaper pattern. Mrs. Wilma Hunt sermonizes about morality as she destroys life. The devil appears, but then is set aside for Kool-Aid. The poet’s dead-pan delivery suggests a third presence: the open-eared listener who observes details, judges a tad, and chuckles at the absurd human condition—like an adult reader.

Carry A. Nation came into our house and filled it
With her meagerness. She was hung full-fleshed
Against the flowered wallpaper of our living-room,
And Mrs. Wilma Hunt, who brought her, gave each
Of us a little wooden hatchet. “John Barleycorn
Is the Devil,” Mrs. Wilma Hunt said. And
by dropping worms head-
First into alcohol she taught us
To hate him. “Now let me tell
You,” she said, “about the LTL….”

She taught us the Loyal
Temperance Legion song, all of it, then killed
Another worm and served refreshments. Our house
Had never been so full. There were all of us, with
Carry on the wall-
Paper: Kool-Aid, Cookies, Song,
Something-New-to-Hate
And several dead worms
Curled in alcohol. 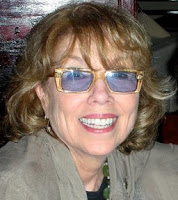 Gloria Vando Hickok has enriched the Kansas City area literary community since moving to Johnson County in 1980. She founded Helicon Nine, a nationally recognized women’s arts magazine, which then became a press, Helicon Nine Editions. In addition, she and her husband Bill Hickok co-founded The Writers Place, a literary arts center in Kansas City, Missouri. This poet combines such service with writing award-winning books.

Vando is a Nuyorican: a person of Puerto Rican heritage born in New York City. She layers this cultural perspective through her verses. Most of her poems begin with autobiographical moments, which then expand into global perspectives.

Narrative is a strong element in all of Vando’s works, and also history. She regales her readers with dramatic stories set in Sarajevo, Vietnam, Korea, San Juan, New York, and Kansas City. She personalizes political comment by adding emotional reactions to factual events. She also tells her own larger-than-life stories in well wrought verse.

“Orphans” is one of these stories. The fourteen-line poem follows an unrhymed sonnet pattern. The first eight lines set up the situation—death of a loveless parent—and then the poem shifts to the mother’s advice about grief. Acorns and wind are familiar images to Midwestern readers, and here these natural forces suggest wholeness. The last two lines are the sonnet’s couplet, with the surprising final chord—acceptance of “luck.” The mother empowers her orphaned (or fatherless) daughter by framing her within a larger cosmos.

as child of one whose eyes and mouth
and temperament were mine, my mother
cautioned me, told me not to mourn
what I perceived as loss: you and I

are daughters of the wind, she said,
you and I are fathers of our souls,
sprouting intact like seedlings
from two wind-borne acorns.

We thrive on luck, she said,
there is no father’s love in that.

Education: Vando was born in New York City and lived in Amsterdam and Paris. She received a BA from Texas A and I College and pursued graduate studies at Southampton College, Long Island.