The New Yorker has an excellent poem about the fragmentary nature of Greek lyric poet Sappho's extant poetry--its "redactions" and more. She was from the island of Lesbos and lived about 630-570 before current era. I am looking forward to Stanley Lombardo's new translation, due out soon.

Thank you to Kyle Waugh, literary executor of Kenneth Irby’s estate, for making possible this broadside of an unpublished 1965 poem “Oh Grand Chord,” printed by Michael Klausman and Patrick Tillery of Wry Press in Longmont, Colorado. Among my favorite lines: 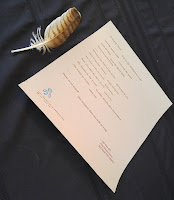 Posted by Denise Low at 9:28 AM Links to this post

This was my presentation for the Associated Writers and Writing Programs panel Uneasy Alliance: Poets Laureate & Government Agencies, Feb. 9 in Washington D.C. Thank you to Patricia Clark for adding me to the panel. Several people asked me to post my remarks, and thank you for your kind encouragement.

I’m Denise Low, poet laureate of Kansas 2007-2009.  Poets laureate positions are now among
the most important public political positions. They do come for the poets first.

Kansas is a canary-in-the-mine state for the United States. It was crucial in the Free State battle of the 19th century. John Brown fired his first shots against marauding Missouri slavers in the Battle of Black Jack, 1856, near Baldwin City. A hundred years later, Brown versus Topeka Board of Education was the deciding legal case determining school desegregation. Kansas is a political hotbed.
In 2004, Kathleen Sibelius, secretary of health under Obama, was governor of Kansas. She established the poet laureate position. The Kansas Arts Commission, a state agency, researched the position for her and determined its scope. Jonathan Holden was the first Poet Laureate in 2005, and I was the second, starting duties in 2006 and continuing appearances until 2009. Duties included judging Poetry Out Loud, giving an ecumenical invocation for the governor’s arts awards, and many other wonderful activities. The Internet was newish, and I started a blog, still going, that dates to 2006. I posted poetry broadsides every couple weeks, eventually published as a book, To the Stars: Kansas Poets of the Ad Astra Poetry Project  (Washburn Center for Kansas Studies/Mammoth 2010, Kansas Notable Book)
All went well. Caryn Mirriam Goldberg was chosen 3rd Ks. Poet laureate and began her term, summer of 2009. In early 2010, she organized (with my assistance, but she was the prime mover!) a conference of state poets laureate in Lawrence.
Then, 2011, U.S. Senator Sam Brownback took office as governor. You may not have heard of him. He was a member of the Values Action Team and a leading social conservative in the Senate. He converted to conservative Catholicism in 2002 and is a member of Opus Dei. He, before Trump, subscribed to the policy of dismantling government institutions. He had presidential aspirations.
Did I mention the Koch brothers are from Wichita, and they backed his career? If you have read Thomas Frank’s first book What’s the Matter with Kansas, you will see where I’m going. He explains how people are persuaded to vote against their own best interests, even if it means losing the family farm. Many family farms were lost.
One of the first things Brownback did was to defund the Kansas Arts Commission. He gave no reason. The KAC was well run and high profile in this rural state. Arts events were funded in remote areas where the tax base supports only bare essentials. In addition to the arts, the Koch brothers and Brownback despise public education. Home-schooled fundamentalist Christians are the ideal. So Brownback cut taxes to the point public education, the arts, the roads, health support for severely handicapped people, and social services were barely functioning. I can testify that after seven years, trickle-down economics in Kansas is a complete bust. This year Kansas has a 360 million dollar deficit, expected to be half a billion next year, in a small state. Brownback uses funding for schools to balance the budget, and they, once excellent, are faltering.
Back to the arts commission. Brownback tried to establish a private arts organization that would approve fundamentalist Christian arts programs only. He appointed wealthy citizens to the board. Eventually, this failed—arts administration is not an amateur game. The tea party Kansas legislature even voted to fund the KAC, but Brownback vetoed the bill. The KAC is gone. Gone. Poets in the Schools, grants to artists, dance performances, art exhibits, concerts, quilt workshops--all gone.
Caryn Mirriam Goldberg, with allies, did a Kickstarter in 2011 to keep her position viable for a year. She approached many angels. Finally, the Kansas Humanities Council agreed to accept the program. This nongovernment organization is not at the whim of politics. With the KHC the focus of the position shifted from arts to humanities content, so there is more emphasis on community building rather than aesthetic/craft issues. No problem. To this day, the KHC is the home of the poet laureate, and the position is doing well.
And Kansas people have awakened from the delusion that Brownback is helping anyone. His approval rating is way down, 18%. The Koch brothers abandoned his bid for the presidency, and even Trump has not put him in any position (we were hoping he would leave Kansas but feared for what he would do to the country). The legislature of Kansas is now, after 2016 elections, moderate Republicans and Democrats, so a slow repairing has begun. Tax cuts have been reversed by the state legislature, February, 2017.
There is a happy ending, perhaps. The poets of Kansas keep up an internet presence of poetry projects, and the latest theme, 2017, is resistance—you can see poems of resistance online at 150 Kansas poems, “Heartland! Poetry of Love, Resistance, and Solidarity.” Thank you to Caryn Mirriam-Goldberg for her heroic resistance to government sabotage and to the KHC for its support.
Do prioritize support for the arts. They do go after the poets first. The National Endowment for the Arts is in danger. Americans for the Arts is a general organization that supports all arts programs, especially the NEA. AWP is a member and lobbies each year through the Arts Advocacy Day initiatives on Capitol Hill, this year March 20-21. Making poetry is a political act.


As poet laureate I went all over a large and diverse state, from inner cities in KC to sparsely populate High Plains areas. Libraries, arts centers, and schools all create a situation of deep literacy, critical to being a good, informed citizen. Today more than ever, this is an essential charge of our public life as writers.
Posted by Denise Low at 2:36 PM Links to this post