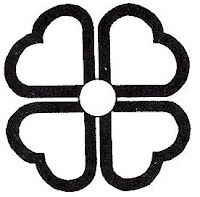 I’ve created a project through USA Artists that will fund writing about Lenape Delaware “rose” or medicine wheel images. If you contribute, you will receive listing as a donor and a beautiful, limited edition print of poetry and American Indian rosette (or Medicine Wheel) imagery. I'm working with a musician also, John Stephen Howard.


At higher funding levels, you receive a CD of related music, audio recording, or even tours of Native works at the Nelson-Atkins or National Museum of the American Indian. Groups or organizations may want to consider planning a tour or scheduling a lecture, Jan.-Sept. 2013. All these are perks of this fundraiser. If you wish to receive updates of this project, please hit the “Follow” button at http://deniselow.blogspot.com or the project link—which includes further information plus a video.http://www.usaprojects.org/project/lenape_codes_explorations_in_delaware_arts/about/updates
This project must meet its goal, or it will not be funded. All donations will be returned if the project does not meet its goal. It is similar to Kickstart or IndieGoGo. My thanks to Roger Shimomura who nominated me for this group. Neilah Myers of USA Artists gave invaluable assistance.


Best wishes, Denise Low
Posted by Denise Low at 11:34 AM

Lenape Codes: Explorations in Delaware Arts, LIVE TODAY! Please read, and if you can help the project, links are included.

Lenape Codes: Explorations in Delaware Arts: <p>This project evolved through a memoir I began writing on my grandfather, a Lenape(Delaware) American Indian, in an attempt to explore my personal heritage andthe facets of his American indigenous identity. These were suppressed by thesocio-political pressures of his lifetime. My research uncovered an unknownglyphic language that expanded the scope of my memoir into a multi-media piecethat explores graveyard symbolism. Algonquian people like the Lenape usedimages that preserved clues to their tribal identities and historical eventsnot otherwise documented.&nbsp;</p><p>I isolated the marble tombstones, ornamented with woodland motifs and specifically the &ldquo;Ojibway Rose&rdquo; as the primary source to explore the imagery and significance of this glyphic language.&nbsp; The tombstones also mark the path of the Algonquian Indians from Great Plains back to the place of contact betweenEuropeans and Algonquian bands on the East Coast. The connotative symbolism of the Rose represents everything from the spiritual and ceremonial tradition to prayer, healing, Earth, and plant life. I refer to the format of this piece as a &ldquo;creative text&rdquo; because it is composed of assembled photographs, maps, documents, and my own response in the%
Posted by Denise Low at 8:04 PM 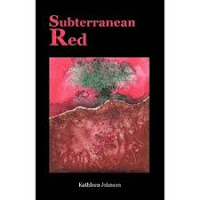 Kathleen Johnson’s second book of poetry alternates between images and verse, between free verse and prose, between Tsalagi (Cherokee) and Anglo traditions. She writes: “Poetry is the language spoken here/ in Gaelic, in English, in Tsalagi” (“Waiting for Winter Dark”). As more and more Americans are born with mixed heritages, this book is a field guide to survival. Johnson finds ways to inspire. She remembers Tsalagi people who were persecuted and exiled: “…the flame carried / on the trail to Oklahoma / still burns” (“Waiting for Winter Dark”).

The strong red-on-black cover design sets up a crackling dynamism. Portraits of grandparents accompanying text create short narratives that evoke heritage in personal terms. The slippage of memory makes storytelling incomplete, so lyrics prevail in this book. The poem “Ghost” teeters between the worlds of the living and the departed. This is also a moment between present and past. Winter imagery is the backdrop, with snowfall like “a gauzy shroud.” The narrator looks at “… the days before, / the days after”; she wonders, “Who can wake this world?” It is a moment set in a void, yet sound continues. Sotto voce growls of a bear are part of this surreal place, and “She hears only her own / wretched, beautiful, lusty wail.”  Even when identity is removed from the narrator, she still has her individual sound, like the poet herself.


She has been drained of color
until invisible. Nobody
looks at her now.
She sees her life
behind her: a cold landscape
shot through with red.
There were the days before,
the days after.
Snow dusts the ground,
covers it like a gauzy shroud.
Who can wake this world?
A bear growls unheard
in the distance.
Ravens wheel in forbidding skies,
dark as her dreams.
She waits for a saving voice.
She hears only her own
wretched, beautiful, lusty wail.


from Subterranean Red by Kathleen Johnson (Norman: Mongrel Empire Press, 2012, $14) http://www.amazon.com/Subterranean-Red-Kathleen-Johnson/dp/0983305277
Kathleen Johnson is the great-great granddaughter of Kansas frontier poet Orange Scott Cummins, best known in the Gyp Hills area as the Pilgrim Bard. Her collection of poems, Burn, published by Woodley Press in 2008, was selected as a Kansas Notable Book in 2009. Her poems have been published in the Concho River Review, Cottonwood, Cherokee Writers from the Flint Hills of Oklahoma: An Anthology (Indigitronic), Kansas City Star, Kansas City Voices, The Midwest Quarterly, The Louisville Review, Santa Fe Literary Review, West Branch, Westview, and others. She is the editor and publisher of the New Mexico Poetry Review. Johnson received her BFA in history of art and MFA in creative writing from the University of Kansas. As a freelance book critic specializing in poetry, she published over sixty book reviews in The Kansas City Star between 2002 and 2009. After dividing her time between Kansas and New Mexico for many years, she lives in Santa Fe.

The next U.S. Poet Laureate Consultant in Poetry, appointed by Librarian of Congress James H. Billington, is Natasha Trethewey. The Poet Laureate “seeks to raise the national consciousness to a greater appreciation of the reading and writing of poetry” (U.S.Library of Congress). This distinguished poet has won the Pulitzer Prize, a Guggenheim, and an NEA Fellowship; she also is Poet Laureate of Mississippi, and she will continue in that position for the full four-year term.
(Mississippi State Poet Laureate site)

I know Natasha through her service as a board member for the Associated Writers and Writing Programs (see AWP site). I value the conversations we have shared about mixed-race heritage, misleading appearances, and historic continuity. I appreciate her accessibility. Consistent with that quality, she will be in residence in DC as poet laureate, not at a distance from the Library of Congress offices. I expect a very hands-on, committed tenure as PL.

Her work ranges from formal sonnets to elegant free verse. Her three published books range from more formal poetry (patterned verse) to skilled experiments in “docu-poetry,” to use Joseph Harrington’s term. She references historical situations as a frequent topic, but with her own interpretive and emotional focus. The American past threads through all Trethewey’s writing; it adds gravitas. Her poem “Kitchen Maid with Supper at Emmaus, or The Mulata,” after the painting by Diego Velàzquez, ca. 1619 (forthcoming in Thrall, Sept., Houghton Mifflin Harcourt) has one of the most evocative descriptions of a woman, comparing her, and her servitude, to round kitchen containers. The 17th century portrait suggests historic context for women's experiences, with nuanced suggestions about both confinement and beauty. It begins:


She is the vessel on the table before her:
the copper pot tipped toward us, the white pitcher
clutched in her hand, the black one edged in red
and upside down. Bent over, she is the mortar
and the pestle at rest in the mortar—still angled
in its posture of use. She is the stack of bowls
and the bulb of garlic beside it, the basket hung
by a nail on the wall and the white cloth bundled
in it, the rag in the foreground recalling her hand….
<>
The painting structures the poem, but the selection of the copper pot, pitchers, mortar, bowls, garlic bulb, and baskets all echo the female shape. This focus also emphasizes the dehumanization of the woman—she is a kitchen utensil, stacked among the bowls. Most importantly, she leaves an imprint, the "rag" that recalls the shape of "her hand." This woman's life is not obliterated through her low class nor through time's erasure.
Her Pulitzer Prize-winning book Native Guard (Houghton Mifflin 2006) centers on the African American 2nd regiment, in Mississippi, that served in the Civil War for the Union. It is a significant work in American poetics. It also is a casebook of how to refine literary motifs throughout a collection of poetry.
<>Here are more links and a biography for Natasha Trethewey:<><>Academy of American Poets and the rest of the poem “Kitchen Maid”: <>http://www.poets.org/viewmedia.php/prmMID/22865<><>New York Times<> article<><>http://www.nytimes.com/2012/06/07/books/natasha-trethewey-is-named-poet-laureate.html?_r=1&ref=todayspaper
Emory University article
http://news.emory.edu/stories/2012/06/upress_natasha_trethewey_us_laureate/campus.html#.T9Aub9Ulc5c.facebook<>