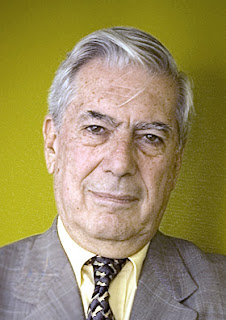 The web has relatively little information about this Spanish-speaking Peruvian writer whose major works extend before web-time. He was born in 1936 and began publishing major works in his thirties. His opus of novels, poetry, drama, criticism, journalism, and essays have earned him the Spanish literature Cervantes prize.
The Nobel committee cited writer Mario Vargos Llosa's work for its: "cartography of structures of power" and "trenchant images of the individual's resistance, revolt, and defeat."
PBS interviewed UCLA professor Efrain Kristal about Vargas Llosa's work. Kristal described his career: "He's one of the master storytellers of the 20th century. He is also a master of literary technique who was able to take folk approaches to shifting temporal and spatial planes to a new level. He was first famous for writing three very strong novels in the 1960s in which he explored the corrosive impact of corruption on individuals, on communities and on society at large. And then in the 1970s there was a turning point in his career. He began to turn to humor, to irony, to a literary technique in which he alternated literary registers and was very concerned about the theme of the fanatic." http://www.pbs.org/newshour/art/blog/2010/10/conversation-the-life-and-work-of-nobel-prize-winner-mario-vargas-llosa.html
Vargas Llosa's non-fiction prose, Contra viento y marea (three volumes: 1983, 1986, and 1990), has been edited and translated by John King as the book Making Waves (http://www.amazon.com/Making-Waves-Mario-Vargas-Llosa/dp/0140275568 )
Posted by Denise Low at 6:38 AM

Author Pamela Dawes Tambornino reads at the Lawrence Public Library auditorium tonight, Oct. 5, 7 pm. She will sign copies of her new book, Maggie's Story: Teachings of a Cherokee Healer. The book contains a series of vignettes and remembrances of times spent with her grandmother and lessons learned during the course of daily activities. Books will be available for purchase. Here is how one chapter begins:


My grandmother was a special woman, not just because she was a healer, but because she knew the stories and ways of the Nation. Many nights we would lie on a blanket outside and look at the stars. These were special times. She would point at the big dipper and talk about the story behind it, and then in the same breath would talk about how stars began in the sky – the old stories of the elders.
Posted by Denise Low at 7:52 AM