Lyn Hejinian introduces Kenneth Irby reading--featured on the Ron Silliman Poetry Blog and YouTube. Irby begins reading about 22 minutes into this tape. Kenneth Irby was born in 1936 in Bowie, Texas and raised in Fort Scott, in Kansas. He served in the U.S. Army and holds degrees from Harvard and the University of California, Berkeley. He teaches English at the University of Kansas. He has published nineteen poetry books, including The Flower of Having Passed Through Paradise in a Dream, Kansas-New Mexico, To Max Douglas, Orexis, Call Steps: Plains, Camps, Situations, Consistories, and Ridge to Ridge among other titles. Jed Rasula wrote, "Irby's origins in Kansas, much traced in his work (and unfortunately often the only thing people know him for), is given such a clear realization in the early books that that locality persists largely because of the poetry's achievement of it as land (re)gained in vision." Rasula goes further: "Irby's continental grasp yields not geography (to allay the fears of those who suspect him of writing 'dull geography') but 'a world shared not just of references but possibilities/to excitement.'" In 2010 he was a co-winner of the Shelley Memorial Award.

My poetry column "On Poetry" for the Kansas City Star is posted online today: “Collections by four female poets touch on cultural identity, nature and myth” I was inspired by the success of women writers, including new books by Natasha Trethewey (U.S. Poet Laureate), Mary Oliver (why does she keep selling so well!), Louise Gluck (mythic lyricist) and Rain Gomez (Creole-Choctaw cook and poet). The review begins:

“The beginning of 2013 brings 'best-of' lists and also a celebration of women’s achievements as writers. The year’s first issue of Poets & Writers magazine notes women as winners of 56 percent of 2012 book prizes. Recent books show how poetry is indeed women’s work and how they excel.” Read more here: http://www.kansascity.com/2013/01/18/4016097/a-chorus-of-female-voices.html#storylink=cpy

Poets especially are awaiting the poetry moment during the presidential inauguration Monday, Jan. 21, which is also Martin Luther King's birthday. Those who are familiar with Richard Blanco, his poetry, and his commitment to his art know that it will be outstanding. Since the announcement Jan. 8 that he would be the chosen poet, many links are now available. Also, Xanath Cáraza invited him to Kansas City for The Writers Place, Letras Latinas, and UMKC events. Thanks to her for this great photo. Here is the link to that visit and other Richard Blanco links:


Richard Blanco’s own website begins with this anecdote: “. . . a woman once asked me to share something about myself that no one would know directly from reading my bio or my work. Somewhat embarrassed, I told the audience about my poetry dance -- a little Michael Jackson-inspired shtick I do around the house in my pajamas when I am high from a good-poem day.”  http://www.richard-blanco.com/


PBS News Hour Interview  1.18.13. 5 min. Richard Blanco speaks about the challenge of examining his own work in preparation for writing the occasional inauguration poem. He reads the poem “Betting on America,” about the Miss America pageant on TV when he was a kid. http://www.pbs.org/newshour/art/blog/2013/01/friday-on-the-newshour-inaugural-poet-richard-blanco.html


New York Times announcement , Jan. 8, 2013, by Sheryl Gay Stolberg, which begins: “From the moment Barack Obama burst onto the political scene, the poet Richard Blanco, son of Cuban exiles, says he felt ‘a spiritual connection’ with the man who would become the nation’s 44th president.”
http://www.nytimes.com/2013/01/09/books/richard-blanco-2013-inaugural-poet.html?_r=0

Poetry Foundation website has bio, sample poems, photo. Also, there is an interview, “Richard Blanco on Being Chosen as the Nation's Fifth Inaugural Poet," by Ruth Graham. http://www.poetryfoundation.org/article/245312   Inaugural 'sle 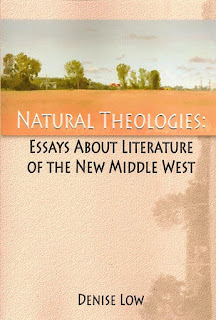 MariJo Moore invited me to join a blog chain 2013 & THE NEXT BIG THING - a series of interviews with authors about what they’ve been working on. I understand it has been going since October! Here is the link to her blog: http://marijomoore.blogspot.com/   Here is my own latest book, not yet a year old: Natural Theologies: Essays about Literature of the New Middle West (ISBN 978-1-935218-22-7. 185 pages, $20.00)  http://www.thebackwaterspress.org/our-authors/denise-low/    I hope to promote it in 2013.


What is the one-sentence synopsis of your book?
Middle West and Great Plains writers continue a “frontier” legacy with topics of nature, weather, the relationships among Native and European settler writers, urban-rural dialectic, and community life.
What genre does your book fall under?
Non-Fiction, critical essays.
What other books would you compare this story to within your genre?
This is like some studies of ethnic literatures, but this is the first book that considers literature of this region.
Who is the publisher?
The Backwaters Press in Omaha, published by Greg Kozmicki. He has done so much as an independent literary publisher.  He is an unsung hero, and a fine poet himself. Working with Kozmicki and his copy editor were a gorocess.
Who or what inspired you to write this book?
I realized other regions of the country celebrate their literature, but in the plains and prairies, writers do not have the same recognition.
What else about your book might pique the reader's interest?
I have been grateful for some wonderful reviews from the Kansas City Star, the Manhattan Mercury, and others. A reviewer for  American Indian Library wrote: “This is the first book of critical essays about contemporary Midwestern writers. Denise Low, of Delaware and Cherokee heritage, foregrounds Native writers, including Louise Erdrich, Heid Erdrich, Diane Glancy, Joseph Marshall III, and Adrian C. Louis. The four sections of Natural Theologies are about history, settlements in the Plains, Midwestern people and their character, and nature. The author considers not only the legacy of “frontier,” but also the enduring narratives of settler/Native interactions.”
Where did the idea come from for the book?
As a young writer, I learned that writing is a dialogue with books. I began reviewing books after my M.A. in literature as a way to expand my writing practice. This book includes expanded essays on books that have influenced me.
Which actors would you choose to play your characters in a movie rendition?
I really don’t think this book will be made into a movie, but I really think N. Scott Momaday is very cinematic. I’d like to see a movie about his writings. He has influenced many Native and Southwest/plains writers, especially because of his insistence that the oral tradition as a valid literary genre.
How long did it take you to write the first draft of your manuscript?
I had some ideas and a few drafts, but I spent one summer drafting this, working intensively every day, and then another year editing it.
And to keep 2013 THE NEXT BIG THING going, here is another wonderful writer, Lisa Hase,  and her next big thing: http://zingarapoet.net/author/zingarapoet/

The choice of Richard Blanco as 2013 presidential inauguration poet illustrates the deep field of fine poets in America today. Blanco has three books out, all from university presses, not major publishers. University of Pittsburgh Press published Looking for The Gulf Motel (2012), and he toured recently reading from this book. One stop was Kansas City’s The Writer’s Place on Sept. 16 where I saw him (and bought his book). He was reading with fiction writer Fred Arroyo, and that Sunday afternoon readings was a highlight of the autumn.


His second book, Directions to The Beach of the Dead (Camino del Sol) from the University of Arizona Press (2005), won the PEN/Beyond Margins Aware; and City of a Hundred Fires (Cienfuegos) won the Agnes Lynch Starrett Poetry Prize and was published by the University of Pittsburgh Press (1995).


Blanco engages his readers with his intimate voice. Ripples of memory wash through narratives, along with familiar scenery and images. The result is an apparently effortless voice-over that could narrate a biographical documentary. The vivid writing simulates a cinematic mode. Here is the first stanza of his recent book’s title poem:


There should be nothing here I don't remember . . .


The Gulf Motel with mermaid lampposts
and ship's wheel in the lobby should still be
rising out of the sand like a cake decoration.
My brother and I should still be pretending
we don't know our parents, embarrassing us
as they roll the luggage cart past the front desk
loaded with our scruffy suitcases, two-dozen
loaves of Cuban bread, brown bags bulging
with enough mangos to last the entire week,
our espresso pot, the pressure cooker--and
a pork roast reeking garlic through the lobby.
All because we can't afford to eat out, not even
on vacation, only two hours from our home
in Miami, but far enough away to be thrilled
by whiter sands on the west coast of Florida,
where I should still be for the first time watching
the sun set instead of rise over the ocean. . . .


The poem continues for four stanzas with the refrain “There should be nothing here I don’t remember.” Blanco uses the conditional mood “should” throughout the poem, which works well in Spanish but usually not so well in English. He translates this effectively, so that by the end of the poem, his memories are both present and past: “I want to find The Gulf Motel exactly as it was/and pretend for a moment, nothing is lost.” Blanco successfully melds his two cultures (his parents are Cuban) as well as his two languages.


Paradox is one of the major themes in this poet’s works. “The Name I Wanted” is an autobiographical monologue about his choice of the name “Richard” over “Ricardo”: “Ricardo De Jesus Blanco, I dub thee myself/Sir Richard Jesus White.”


He also navigates his queer identity in “Queer Theory: According to My Grandmother.” He learns from her “You can’t wear cologne or puka shells/and I better not catch you in clogs.” Rules of conventional masculine behavior are clear in the mind of his abuela, but she loves him in her own way: “you will not look like a goddamn queer,/ I’ve seen you . . . / even if you are one.” His grandmother accepts his orientation in her own way, as she accepts the Miss America contest in “Betting on America”: Grandmother plays the bookie in that family scenario. In “Thicker Than Country,” he revels in the contradictions of “A Cuban like me living in Maine?”


He told New York Times reporter Sheryl Gay Stolberg about the conservatism of Cuban culture: “’It’s trying to understand how I fit between negotiating the world, between being mainstream gay and being Cuban gay.’”


Blanco is multi-talented—he has an engineering degree as well as an M.F.A. in poetry from Florida International University. Blanco’s website is:  http://www.richard-blanco.com/  Here is an NPR interview/reading with Blanco: http://www.npr.org/templates/story/story.php?storyId=1038124
Posted by Denise Low at 12:43 PM