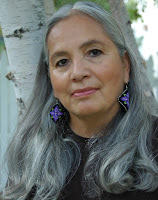 
Full-color cover, After Boarding School: Mourning, is copyrighted by Klamath-Modoc artist Kaila Farrell-Smith, used with permission. It is in the permanent collection of the Portland Art Museum, purchased with funds from the Native American Art Council.
Posted by Denise Low at 8:32 PM

Press release: "The title poem of Peter Balakian's Ozone Journal is a sequence of fifty-four short

sections, each a poem in itself, recounting the speaker's memory of excavating the bones of Armenian genocide victims in the Syrian desert with a crew of television journalists in 2009. These memories spark others—the dissolution of his marriage, his life as a young single parent in Manhattan in the nineties, visits and conversations with a cousin dying of AIDS—creating a montage that has the feel of history as lived experience. Bookending this sequence are shorter lyrics that span times and locations, from Nairobi to the Native American villages of New Mexico. In the dynamic, sensual language of these poems, we are reminded that the history of atrocity, trauma, and forgetting is both global and ancient; but we are reminded, too, of the beauty and richness of culture and the resilience of love.

Bach’s cantata in B-flat minor in the cassette,
we lounged under the greenhouse-sky, the UVBs hacking
at the acids and oxides and then I could hear the difference

between an oboe and a bassoon
at the river’s edge under cover—
trees breathed in our respiration;

there was something on the other side of the river,
something both of us were itching toward—

radical bonds were broken, history became science.
We were never the same."

Peter Balakian (born June 13, 1951), American poet and nonfiction writer. Balakian was born in Teaneck, New Jersey, and grew up there and in Tenafly, NJ. He attended Tenafly public schools and graduated from Englewood School for Boys (now Dwight-Englewood School) before earning his B.A. from Bucknell University, an M.A. from New York University, and a Ph.D. from Brown University in American Civilization. He has taught at Colgate University since 1980 where he is currently Donald M. and Constance H. Rebar Professor of the Humanities in the department of English, and Director of Creative Writing. He was the first Director of Colgate’s Center For Ethics and World Societies.

He is the author of five books of poems, most recently [before Ozone Journal] June-tree: New and Selected Poems 1974-2000. The others are Father Fisheye (1979), Sad Days of Light (1983), Reply From Wilderness Island (1988), Dyer’s Thistle (1996), and several fine limited editions. His work has appeared widely in American magazines and journals such as The Nation, The New Republic, Antaeus, Partisan Review, Poetry, and The Kenyon Review; and in anthologies such as New Directions in Prose and Poetry, The Morrow Anthology of Younger American Poets, Poetry’s 75th Anniversary Issue (1987), The Wadsworth Anthology of Poetry, and the four-CD set Poetry On Record 1886-2006 (Shout Factory). Balakian is the author of the memoir Black Dog of Fate, winner of the PEN/Albrand Prize for memoir and a New York Times Notable Book, and The Burning Tigris: The Armenian Genocide and America’s Response, winner of the 2005 Raphael Lemkin Prize and a New York Times Notable Book and New York Times and national best seller. He is also the author of Theodore Roethke’s Far Fields (LSU, 1989). His essays on poetry, culture, art, and social thought have appeared in many publications including Art In America, American Poetry Review, The Chronicle of Higher Education, The American Quarterly, American Book Review, and Poetry. Balakian’s prizes and awards include a Guggenheim Fellowship; National Endowment for the Arts Fellowship; Emily Clark Balch Prize for poetry, Virginia Quarterly Review 2007; Movses Khorenatsi Medal from the Republic of Armenia 2007; Raphael Lemkin Prize, 2005 (best book in English on the subject of genocide and human rights); PEN/Martha Albrand Prize for Memoir, 1998; Anahid Literary Prize, Columbia University Armenian Center, 1990.