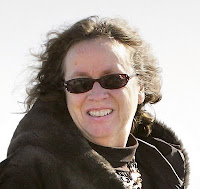 As a fifth-generation Kansan, Denise Low writes verse that references the history and environmental concerns of this region. She grew up at the edge of Emporia, where the Flint Hills and town meet. Early experiences were with wildlife, grasslands plants, weather, and home gardens of the area. She learned to plant tomatoes every summer, and nothing store-boughten can compare to their flavor. From William Allen White, William Stafford, and William S. Burroughs, she
learned the variety of Midwestern experiences and the idioms of those literary traditions.

Like Stafford, Low is conscious of time as another dimension, which has its own cycles, more recursive than linear. Transformation, rather than static grief, characterizes this elegy to her mother. A “columbarium” is a cemetery for people who have been cremated. The poem is a study in contrasts: cold and sun; brick and ash; organic and mineral; sky and earth; animate and inanimate; grief and joy. These oppositions constantly shift.


Cold sun brings this mourning season to an end,
one year since my mother’s death. Last winter thaw
my brother shoveled clay-dirt, she called it “gumbo,”
over powdery substance the crematorium sent us,
not her, but fine, lightened granules—all else
rendered into invisible elements. That handful
from the pouch, un-boxed, was tucked into plotted soil,
the churchyard columbarium, under a brass plaque
and brick retaining wall, as semblance of permanence.
Now my mother is a garden—lilies and chrysanthemums
feeding from that slight, dampened, decomposing ash.
Her voice stilled. One ruddy robin in the grass, dipping.

Education: Denise Low earned BA and MA degrees in English (University of Kansas 1971, 1974) and an MFA in Creative Writing from Wichita State University (1984). In 1997 she completed a PhD at the University of Kansas in English.
Career: Low has taught and been an administrator at Haskell Indian Nations University for 25 years. She also has been Visiting Professor at the University of Richmond and KU. She has written and edited more than 20 books of poetry and prose. From 2007-2009 she served as Kansas Poet Laureate. She is on the national board of the Associated Writers and Writing Programs. Her awards include NEH, Lannan, KAC, and Poetry Society of America recognition.
Her websites are www.deniselow.com and http://deniselow.blogspot.com
Posted by Denise Low at 9:58 AM

Dear Poetry Friends,
I am finishing my last official Ad Astra Poetry Project electronic broadside. Many Kansans have asked why I have not included myself—and the answer is this position is about being an ambassador for all Kansas poets, not my own publicity. But I will end with a final sample of my own work. More information and poetry samples are at www.deniselow.com .

What comes next? First, a party at the Lawrence Arts Center July1, 7:30. Caryn Mirriam-Goldberg, the 3rd Kansas poet laureate, and I will both speak, and we will support an independent publication, The new Imagination & Place Anthology. Some of the contributors to this anthology will also read. I will attempt to thank the host of people who have contributed to these two years.

Next, I will continue to present these broadsides periodically. I am surprised by wonderful new Kansas-linked poets almost daily. I have left out some of the poets who were on my original list! And I’ve had so many requests to keep these traveling through cyberspace. These poetry broadsides will continue to be free to media, arts agencies, schools, libraries, and other interested groups and individuals—for nonprofit use.

And do look for a publication of the collected broadsides in book form later this summer. Caryn Mirriam-Goldberg plans to use this book as a text for her own Kansas poet laureate project: to conduct poetry writing workshops across the state (you can make contact with her through the Kansas Arts Commission website). These will be available through www.mammothpublications.com , some area bookstores, and online book vendors.

Most of all, through these two years, I have come to have profound admiration for the Kansas Arts Commission staff and board; former governor Kathleen Sebelius, who supported the establishment of the program; the first poet laureate Jonathan Holden; Thomas Fox Averill, who nominated me; my husband Thomas Pecore Weso and family who supported me personally; friends, and especially Caryn Mirriam-Goldberg, the 3rd Kansas poet laureate; Ad Astra poets and poetry contest participants; and all the educators, librarians, independent writers, arts agencies, social service agencies, and students who create our ongoing literary tradition.

I have come to believe that poetry leads its readers and practitioners to a deeper kind of literacy, one that involves greater understanding of the balance between conscious and unconscious; physical and spiritual; and objective facts and subjective interpretations. This is essential, not a frill, in these times of the most complex communication systems ever seen.

My gratitude to you for your interest, and all best,
Denise Low
Posted by Denise Low at 9:54 AM 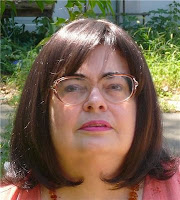 First, please join the next poet laureate and myself at an Imagination & Place-sponsored event July 1, 7:30 pm, at the Lawrence Arts Center. We will celebrate the passing of the torch to Caryn Mirriam-Goldberg, 3rd Kansas poet laureate. Both of us will speak briefly and read poetry. Also, we will celebrate the publication of the Imagination & Place anthology edited by Kelly Barth. Details are attached.

I have not gone through my list of significant Kansas poets—those who have published one book with an outside press and contributed to Kansas culture. So in the future I will continue with some further broadsides. If you would like your name removed from this list, please contact me at deniselow@gmail.com.

So here is another Ad Astra Poetry Project broadside celebrating Linda Rodriguez’s poetry. She has ties to the Latino writing community in Kansas City, as well as ties to central Kansas. She has a new book and upcoming readings: first tonight June 19 at Lenexa, Kansas, City Hall for with the Latino Writers Collective at 7:30 pm; and second, Thursday, June 25, she will read at The Raven Bookstore in Lawrence for the Big Tent Reading Series, with Peter Wright at 7:00 pm. I’ll see you there.

Linda Rodriguez was born in Fowler, graduated from Manhattan High School, and attended Kansas State University before dropping out to hitch-hike to Haight Ashbury in the 60s. Since 1970, she has lived in Kansas City, where she was director of the University of Missouri-KC Women’s Center. Rodriguez is vice-president of the Latino Writers Collective, and she has published in numerous journals and anthologies, including Primera Página: Poetry from the Latino Heartland. Her new collection Heart’s Migration won the Elvira Cordero Cisneros Award. She is of Western Cherokee descent.

In “Coyote Invades Your Dreams,” Rodriguez reminds us of how close Kansans are to animal life. Coyotes stalk fringes of cities and pasturelands. The adaptation of these wily beasts is instructive—we humans also learn environments quickly and well. We share animal qualities of stalking, shifting identities, and forming attachments. A coyote lover is a trickster who both attracts and frightens, like change. The coyote encounter leaves its mark.

You’re staying clear
of him. Just because
you noticed him once
or twice doesn’t mean you want
anything to do with him.
He’s beneath you—
and above you and inside you
in your dreams. His mouth
drinks you deep, and you come
up empty and gasping
for air and for him. That traitor,
your body, clings to him like a life
raft in this hurricane
you’re dreaming. His face
above yours loses its knowing
smile as he takes you. Again,
this night, you drown
in your own desire. Coyote
marks you as his.
You wake to the memory
of a growl.

Kevin Rabas grew up in Shawnee, Johnson County. He attended area colleges and also Goddard in Vermont. Now he teaches creative writing at Emporia State University. He has a musical background, including training in marimba and other percussions. He still performs music regularly in eastern Kansas (see his website below). While living in the Kansas City area, he developed talents as a jazz drummer, historian, and critic, which influences his poetry both in form and content. He writes about Charlie Parker (“Bird’s Horn”) and other musicians. He also approaches a poem like an improvised solo, with a musical phrase (like a poetic image) enunciated and then repeated in varying ways.
In the poem “Lightning’s Bite,” he begins with a child’s voice as a boy asserts that lightning is like a mammal with teeth. Throughout the poem, then, the narrator notices the sky in this new mode, or musical key. The clouds “look like they are carrying heavy sacks.” The trees “wave” in the wind. And because this is a child’s poem, imaginary “great dragons” can appear in the cloud formations. Next, the poem shifts back to an adult’s perspective, or instrumental voice, as the narrator admits the phenomenon is simply wind. So the grown-up comforts the child. Yet the adult narrator is changed. When the storm passes, he sees wind as something more: “It is like standing under a bridge as a train goes over.” The two perspectives merge into a third, as a musician would resolve a melody with a final chord.

Watch out. The lightning might come down
and bite you, my son says, and we look
to the gray, weighted clouds above us
that look like they are carrying heavy sacks
of hail or rain. Or snow, but it is too early for that.
So we hold out our hands and look for the droplets
that should come, and there are none.
So we look to the trees that wave and bend
and to the branches full of big green leaves,
branches that look like the necks of great dragons
twisting and fighting, when all this really is
is wind, and we go home, go inside, and watch
as the lights go out, and we listen to the storm above us.
It is like standing under a bridge as a train goes over.
But this train keeps coming, and rumbling, and my son
puts his hands over his ears. I take him in my arms,
and we do not tremble. We laugh.