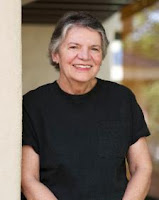 junior college then). I had just finished an MFA, so my colleagues tolerated me teaching Creative Writing, as overloads. They also directed stray literary mail to my desk.

So, one day Brown Wolf Leaves the Res and Other Poems by Diane Glancy, a special chapbook issue of the Blue Cloud Quarterly arrived on my desk. This was my introduction to Glancy, but by no means her first publication. From the chapbook’s biography, I found that in 1984, already she had published in over 90 journals, won the American Indian Theater Co. playwriting contest and honorable mention from the Five Tribes. She had earned an MA from Central State University in Edmond, Oklahoma—and I now know that she would receive an MFA at the University of Iowa in 1988. In 1984, this was her first book.
To give some context, not many Native-written books were on the shelves of the Haskell library, or anywhere. Momaday had published House Made of Dawn in 1968, and won the Pulitzer, but few other books by Native writers, besides as-told-to autobiographies, were available. In 1975, Duane Niatum published the poetry anthology, Carriers of the Dream Wheel, a beautiful volume with color illustrations by Wendy Rose. In its series, Harper & Row published books by Simon Ortiz, James Welch, Niatum, and others. Geary Hobson’s anthology The Remembered Earth, published in 1979, was very important and included writers from all regions of the United States, not just Albuquerque Renaissance writers. It exploded the perception that there were no Indigenous writers. In 1983, Joseph Bruchac edited the poetry anthology Songs from This Earth on Turtle’s Back, which includes Glancy, perhaps her first appearance in a national anthology of Native writers. I ordered this paperback as a textbook for Haskell.
I do want to witness to how courageous these writers and editors of the time were, how effective, how welcome. The doxology of Native as a primitive was everywhere, undisputed. At Haskell, where seniority determined all course staffing, a well-intentioned White man taught American Indian Literature. Texts were traditional accounts and many stories by White authors about Indigenous Americans—think of Frank Waters, James Fenimore Cooper, Ruth Beebe Hill. When I questioned this teacher, he said there were no well-written books by American Indians. He did not object, nonetheless, when I began to order books by Natives. He continued to teach the cushier literature classes, so I integrated contemporary writers into my Basic Comp and Creative Writing classes, including the poetry of Diane Glancy. By 1999, I had more seniority, and when the anthology Visit Tepee Town: Native Writings after the Detours, edited by Diane Glancy and Mark Nowak, was published, I added it to reading lists. It includes post-modern works by Gerald Vizenor, Linda Hogan, Wendy Rose, Maurice Kenny, Allison Adelle Hedge Coke, Juan Felipe Herrera, Greg Sarris, and Peter Blue Cloud. My students and I explored these authors, and this was an essential text.
The publications Diane Glancy wrote and edited encouraged Haskell students from the start. Familiar attitudes helped them to engage with her works. The other Haskell English faculty in the 1980s taught Faulkner (a favorite of a Creek-Seminole professor), George Orwell, and New Yorker writers, so this poem by Diane Glancy, in contrast, was accessible:
Looking for My Old Indian Grandmother in the Summer Heat of 1980
The heat uncovers the window and attic-fan
that pulls in more heat.

It was like this in ‘54, they say,
and I remember, somehow, the hot, white air in the
percale curtains at the window.

It comes back to me now.
I think it was the year my grandmother died.

Her hands and face turn hard before we arrive.
We are bleached clean from her responsibility.

It all happened before I was old enough to ask,
before she knew I would even want to know.

It was because I am more like her than the others
I want to know what rock it is
she left upturned.     (Songs from This Earth 77)

The narrator is close to the actual author, a Native stance familiar to Haskell students, not the stylized British-influenced literary persona. The poem begins with the body, the heat, and with natural forces—sun (implied), wind, rock. Family is present, alive in memory. Childhood is not left behind, but rather informs the present. Glancy’s narration reads the setting as a map of signs, from her grandmother’s face to the gravesite. Workings of the narrator’s mind turn and return to heritage as the she identifies her own future—deliberate and ongoing connection to her grandmother. Glancy enlarges the poem by use of oblique metaphors, “Her hands and face turn hard” reinforces the image of the “rock.” White assimilation, all too familiar to Haskell students, is clear in the phrase “We are bleached.” Alienation, fragmentation, the struggles of assimilation—these are themes quite real to Native readers and led to vibrant class discussions.
The Salt Companion to Diane Glancy gives insights into axises of her work, and a vocabulary of critique. Chadwick Allen notes the “driving compulsion in these texts: to examine in detail a Christian faith embattled both from without and within; to explore a largely unknown indigenous descent; to describe the painful isolation of juxtaposed and asymmetrical identities” (15). Glancy is a border crosser, hybridizer, pasticher, and most of all authentic in her own values. Her writing is individual and communal. Notice how often Glancy collaborates with other editors and writers.
In 1996 Glancy published Pushing the Bear: A Novel of the Trail of Tears, and in the intervening 25 years, her innovations in that book now seem commonplace: ruptured narratives, polyvocality (the cast of narrators), intertextuality (Reverend Bushyhead’s list of needs for the mission, real estate records), deep geography (maps, ecology), historicism, hybridity. Cherokee syllabary and terms challenge hegemony of the settler language tradition. This novel embodies disparate strands about the forced relocations of the 1830s, earlier than any other book, and with great heart. I remember Glancy reading from the manuscript at the Newberry Library in 1990 and her emotion as she described the harrowing writing process. A few years later, I remember hearing younger Native women talk about Glancy’s career, and how important she was as a model for their own writing and academic success. She is one of our valued elders, active through decades of evolving Native literary expression. She deserves our profound gratitude for navigating through those tough early years, keeping faith, and continuing to lead with innovative projects.
In 2009, as Glancy was in Lawrence for film editing of Dome of Heaven, we began the habit of lunch, and one day she asked if my husband Tom Weso and I were interested in her next poetry manuscript for Mammoth Publications. I was, and it developed into Stories of the Driven World, a transgenre collection of travelogue, storytelling, field notes, womanist texts, and faith-based accounts. One of my favorite poems is “Horned Being”:
There are nights they come back as human
it’s a transformation of sorts
they don’t want to come
but something in them makes the change
the transference to other
to see what it would be to walk on nearly two legs
with antlers still on its head
buckskin on its bones
the world is always moving the last field report said
he’d discovered changing slots
whatever they are
it was the last we heard
but scribbled on the pages we received
one leg amputated from a trap
one hand forward, the other back
the four directions for a navel.    (75)
This is about interspecies transformations, from animal to human. Tom coincidentally had a painting that exactly matched the poem’s hybrid creature, which we used for the cover. The poems are intersections of settler and Indigenous, of faith and science, of stasis and motion. The narrator crisscrosses the landscape—questing, commenting, reflecting, celebrating.
Our press Mammoth Publications also did It Was Then: Elements of the Diagonal (2012), with some of my favorite poems about the Kansas area, and a book of personal essays about faith, Now It Is Snowing Inside a Psalm (2011).
At Haskell, I saw many elders through the years—spiritual leaders, writers, alumni, tribal leaders. Most of them began the same way, as they spoke to Haskell students, “Indians are a very spiritual people.” That comes back to me as I think of Glancy’s work, which defies categorization. It is always spiritual. I turn to her own comments in the back of Pushing the Bear, which illuminate this quality. She recounts travels to the site of the old Cherokee capital north of Atlanta. She describes how the farms stolen from Cherokee people in the 1830s were burned by General Sherman twenty years later. She concludes, “Maybe, in the end, our acts cause little energy fields that draw their likenesses toward them” (Pushing the Bear 327). This interconnectedness is an aspect of faith. Glancy writes toward reconciliation. To conclude in her words, she writes in Claiming Breath: “I write with a split voice, of the experimenting with language until the parts equal some sort of whole” (xi). That “whole,” after 35 years, is a remarkable legacy for all writers.