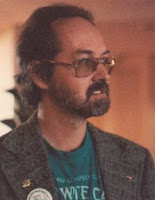 Harley Elliott is the poet’s poet. He is the writer I studied to learn the best ways to write about grasslands and inner landscapes of the imagination. His words flow as smoothly as conversations among friends. He uses an unassuming mid-Plains dialect—peppered with vivid images. I consider him the first English-language poet to use this region’s idioms. Elliott also writes longer works about history of the West, as well as whimsical and surreal poems. Loading the Stone (Woodley 2006) is a unique prose work that straddles fiction and nonfiction.

Elliott has lived in since he was a two-year-old, and his writing reflects his attachment to prairie spaces. Yet he eschews labels. He told an interviewer: “I was really conscious that if I wasn't careful I would get put into this box called ‘prairie poet.’" This poem is directly about avoiding the stereotypes of labels. He suggests all words can limit direct experience of reality. In this case, the monarch butterfly walks on his face, and “blinded by words,” he fails to match its “shining light.” He addresses his readers and asks us to join in his quandary about how to express relationship with nature. Elliott’s “hinged mosaic” description for butterfly wings here is one of my favorites.

This butterfly stopping on my cheek

would choose yours too

if you had fallen down among

and your face closed

of orange black and palomino

has been given a name

and the danger of names hovers

close to both of us today.

Walking up it stops at

the doorway of my eye:

in the shining light of its face.

Education: Elliott graduated from . He received a BA from and an MA in art from .

Career: This poet and artist spent four years in , after college, where he established relationships with publishers, including Dick Lourie (Hanging Loose Press). He returned to and taught art at until it closed. Then he worked in arts education at the . His ten books of poetry are from Crossing Press, Hanging Loose, Juniper, Woodley Press (), and others.

A downloadable version is available for non-commercial use from www.kansaspoets.com 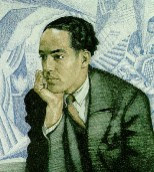 Langston Hughes was born in and raised in until 1915-16. He was a true genius: he innovated the art of mixing spoken words with music, still an evolving American art form. He celebrated African American culture as he wrote poetry using the spoken vocabulary and sometimes in blues rhythms. He was a leader of the Harlem Renaissance in , where he wrote plays, performed poetry, and mentored writers. He was a journalist, essayist, novelist, lyricist, and children’s author.

When my husband and I researched Hughes’s life in for our book Langston Hughes in Lawrence, we found his homes were within walking distance of the . He must have walked to its banks and watched the incessant current. The Kaw indeed is a “muddy” river that can be “golden” at dusk.

In this poem, Hughes calls on his memory of rivers as he catalogues, or lists, rivers important to world civilizations. He writes in uneven lines but maintains the poetic feel by using parallel beginnings and repetitions. He wrote of his poetry that it was often “racial in theme” and in “the rhythms of jazz.” This free-flowing poem could be an improvised solo.

THE NEGRO SPEAKS OF RIVERS

I've known rivers ancient as the world and older than the

I bathed in the when dawns were young.

I built my hut near the and it lulled me to sleep.

I looked upon the and raised the pyramids above it.

I heard the singing of the when Abe Lincoln

went down to , and I've seen its muddy

bosom turn all golden in the sunset.

Education: Langston Hughes graduated from high school in , attended , and earned a BA from , a historically black university.

Career: Beginning with The Weary Blues (1926), Hughes made his living as a professional writer and lecturer. He published over 40 books and wrote numerous plays. 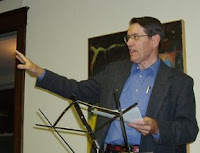