As We Await Buddha's Birthday May 12

This Buddha’s hand has eighteen fingers but
still lost its grip,
bright yellow and arthritic looking, wrapped
in tissue paper, boxed and shipped,
redolent of citrus but its flesh
already rotting far
from its Bodhi, beneath
this Occidental tree,
reaching out as if to say,
“Take. Eat.”
Posted by Denise Low at 5:05 PM

My thanks to Dennis Bosley for his permission to reprint his account of the Stafford gathering April 12 at the Flying W Ranch, in the Fint Hills:

"Forty of us, mostly Kansans, attended the segment of the William Stafford Rendezvous, Saturday, April 12, at the bunkhouse at the Flying W Ranch, in the western part of Chase County, in the Flint Hills. Several Kansas Poets, led by Denise Low, Kansas Poet Laureate, gave accounts of how William Stafford has influenced the course of their careers. She noted how poetry is not a frill, but integral to our survival. Harley Elliott talked about how considering one of Stafford's poems made him close the book. Lots of themes were flying around--Kansas, the reverent way, according to Kim, that William Stafford pronounced 'Cow,' when he said, 'Cow Creek.'

"For those of us Kansans to hear, [Kim Stafford said]: 'It was very important for him to come back to Kansas, not for, about my Father, but about Kansas'; 'Early in the morning he was remembering Kansas.' It was a gentle wake up call: 'Your way of seeing things will be a sort of salvation.'

"Kim said that our gathering may have been characterized by William Stafford as 'This is a little all right.'

"We are making plans to meet again, maybe next year, and continue."

In the Tall Grass of a Landing Zone

The pup scents for the far
drop from the covey rise

so I fetch the last bird
down. Shot at close range

the little hen has come
apart. Her feathers,

wet with her blood,
cling to my fingers.


I probe for the femoral artery
where fragments

of his jungle fatigues
penetrate through the wound.

After it’s over,
and for a long time,

I pick at my fingers---
threads in congealed blood.


On my knees, beside the creek
I wash her feathers away.
Posted by Denise Low at 12:12 PM 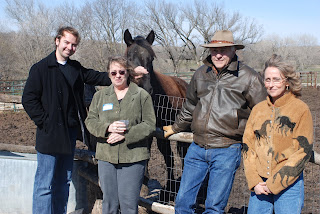 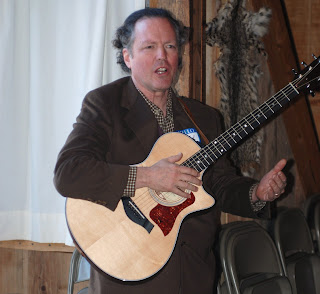 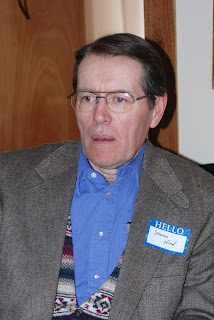 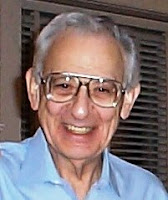 One of the most beloved poets in the Kansas City-Lawrence area is Thomas Zvi Wilson. He and his wife, poet Jeanie Wilson, have lived in Shawnee since 1992. They host the Writers Place Poetry Reading Series at the Johnson County Central Resource Library. Tom Wilson has mentored a generation of area poets through editorial exchanges. He also has supported the Kansas City Writers Place as a board member. Like Wilson, most poets work within a community or educational group in order to craft their writings into the best possible form. Perhaps this poetry collaboration is less known. Most poets, have editing buddies; poem-making is a shared art.

Wilson’s background as an active artist is evident in the structures of his writing. He collages layers of images onto a canvas and then reworks them until each shows clearly. He also balances the outer details of a scene with inner reflection. And he understands how light plays over the entire scenario of a painting or a poem.

In “Klieg Lights,” the narrator, a man very similar to Wilson himself, watches the sun rise from his porch. This is an early summer poem, when sunrise comes sooner each day. The poet, however, conflates the sun with Klieg lights, which are bright carbon-arc lights used to illuminate movie sets. Artists also use such lights in painting studios, and so the poem also has the quality of a still life. This is a human poem, where neighbors remain “nailed” to mattresses—so are passive to nature. Even the wind is personified, as the narrator looks for it to “snore.” Then comes the true action of the poem: penance. The narrator counts his “sins” and hopes for forgiveness. He sees his yard as a “stony patch of garden” not too distant from Eden. He stresses his audit of “pleasures,” including the volunteer weeds.

Moon surrenders so sun may rise earlier,
turn on its Klieg lights while neighbors
are still in pajamas or robes, nailed
to their mattresses.
The wind is asleep, not even snoring.

I count my sins on the porch,
in cushioned silence and solitude,
audit my pleasures, pray that
in the end, though undeserved,
I’ll be forgiven, and mercy will
be sprinkled on me like volunteer
weeds on this stony patch of
garden and this pleasant peace.

Lindsey Martin-Bowen Publishes STANDING ON THE EDGE OF THE WORLD

This is a new Woodley Press publication, available at this link: http://www.washburn.edu/reference/woodley-press/Reviews/standingedge.htm

From Martin-Bowen's new book, here is another perspective on the state with glaciated, wooded hills in the east and high plains in the west--and human drama at every mile in between.

You hear it late at night when the moon
becomes a sliver in someone’s dream,
and ripples in the lake settle
into streams lined with algae and bass.
It might come from John Brown’s ghost
or the specter haunting the WPA castle at Coronado Heights.
It could be wails from Bob Elliot, who died in a wreck
on the red trail winding down from the peak.

Perhaps it’s the lonely moan of a locomotive
over plains where fires break through nights.
Maybe the shriek emanates from the cemetery
edged by yuccas where the snow never stays,
or from the western ridge where wolves cry
and geese wing through wide, blood-red skies.
Posted by Denise Low at 12:54 PM