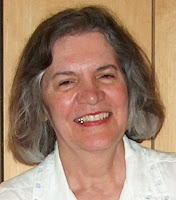 Diane Glancy is the new Ad Astra Poetry Project selection. If you live in the Kansas City area, you may want to see her and Patricia Lawson read their poetry on Tuesday, July 15, at the Johnson County Central Resource Library, 7 pm. The library is at 9875 W. 87th St., Overland Park, Kansas. Her recent book Asylum in the Grasslands (University of Arizona Press) is a finalist for the William Rockhill Nelson Awards.

Diane Glancy, of Prairie Village, Kansas, has German/English and Cherokee heritage. She writes about her family, American Indian histories, and the Midwest. Her novel Pushing the Bear is one of the best known accounts of the Trail of Tears. Her novel Stone Heart is about Sacajawea.
She often blends experimental forms with strong storytelling elements. “Indian Summer,” for example, tells the story of a farm break-up, but also it suggests the season’s changes and historic changes. She uses a pastiche of images to suggest the process of time.
The images—farmhouse, leaves, bugs, cornfields, dress, tools, and barn—appear on a fictitious country road. The narrator drives by them and sees an “open sea” and finally the “white iceberg” barn. The barn’s isolation is highlighted by the comparison to ice, and also the narrator is alone within time and “migrating daily.”

There’s a farm auction up the road.
Wind has its bid in for the leaves.
Already bugs flurry the headlights
between cornfields at night.
If this world were permanent,
I could dance full as the squaw dress
on the clothesline.
I would not see winter
in the square of white yard-light on the wall.
But something tugs at me.
The world is at a loss and I am part of it
migrating daily.
Everything is up for grabs
like a box of farm tools broken open.
I hear the spirits often in the garden
and along the shore of corn.
I know this place is not mine.
I hear them up the road again.
This world is a horizon, an open sea.
Behind the house, the white iceberg of the barn.