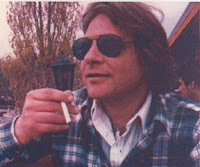 John Moritz attended the of during the late 1960s and remained in the rest of his life. He founded Tansy Press and Tansy bookstore. Steve Bunch remembers: “With his 'Putpenny Pomes' you could put a penny in ajar and take away a small folded mimeographed poem.” Moritz was no capitalist.And through his advocacy of cutting-edge poetry, he advanced the direction of American poetics. Among the writers he published are Ed Dorn,Kenneth Irby, Alice Notley, Paul Metcalf, Joanne Kyger, and Robin Blaser. Inthe1980s he sponsored a poetry reading series that featured some of these authors, and a broadside for each.

Moritz promoted poetry in every possible way; he was himself a fine poet (Iremember urging him to focus more on his own writing).Reviewer Richard Owens notes his connection to writers:“The writing leads back to [Charles] Olson via Dorn.” Focus onnatural flow of language itself rather than traditional forms is apparent in Moritz’s work. Also, his verse has a lyrical emotional tug.He attunes to place as well as to literary tradition.

The poem “”has almost no punctuation.It illustrates Moritz’s concern with wedding his imaginative impulse to solid reality.The poem begins as a journey through neighboring , where he turns an urban scene, ,into a western overland trail. But this quest ends at a restaurant, not the Missouri River (“”).He finds a gar, a trash fish, imprisoned in a decorative pond. Its displacement resonates with “meat packing plants”—what hunting has become within a city landscape. At the end, as Moritz turns his thoughts to poetry—Dante and Ezra Pound—he connects movement of consciousness to the gar’s thrashing: all fight against confinement.

The drive south on12th is on an hispanic artery

pumped by the meatpacking plants

lots of mom and pop comidas

but we were questing

catfish at the endof the trail

while waiting to be seated

in fresh water,clear enough to see the coins

tossed for an aimless wish, the gar circles

out of its water which would be the Big Mo sludge

fishermen who snag agar reeling in their line

take out a vengeance with a knife or boot

but this particular gar circles and thrashes

circling Language with one foot nailed to the floor.

Education: John Moritz was born in ,, graduated from high school in (1964), and resided in since the late 1960s. He attended the .