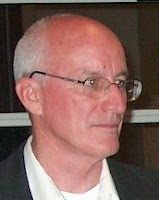 Occasional poetry is simply poetry written for an event or occasion. My grandmother Carrie Strittmatter Dotson wrote a Christmas poem every year. Here is the link to an article about poet Elizabeth Alexander's thoughts about writing an occasional poem for Barack Obama's inauguration:

NY Times: "Mr. Obama’s inauguration, on Jan. 20, calls for an 'occasional poem,' written to commemorate a specific event. This is not precisely what Ms. Alexander does, but she is preparing for the challenge.

“'Writing an occasional poem has to attend to the moment itself,' she said in an interview, 'but what you hope for, as an artist, is to create something that has integrity and life that goes beyond the moment.'”

ICE by Michael Poage of Wichita

I fell and as I lay thinking
about dying
I took inventory.

The moon was not quite full, not
the usual passion, rough on its one edge,
smooth around most that
I could not see, so I was reminded
of you, keeping love out
of mind, out of sight.
Posted by Denise Low at 9:42 AM

Elizabeth Alexander will be the fourth poet to read at a presidential inauguration. The others are: Robert Frost (1961, Kennedy); Maya Angelou (1993, Clinton); and Miller Williams (1997, Clinton).
She was born in New York City, grew up in D.C., and was educated at Yale (BA), Boston University (MA), and University of Pennsylvania (PhD).

Here is the biography from her home page: http://www.elizabethalexander.net/home.htmlAlexander is a poet, essayist, playwright, and professor at Yale University. She is the author of four books of poems, The Venus Hottentot, Body of Life, Antebellum Dream Book, and American Sublime, which was one of three finalists for the 2005 Pulitzer Prize. She is also a scholar of African-American literature and culture and recently published a collection of essays, The Black Interior. She has read her work across the U.S. and in Europe, the Caribbean, and South America, and her poetry, short stories, and critical prose have been published in dozens of periodicals and anthologies. She has received many grants and honors, most recently the Alphonse Fletcher, Sr. Fellowship for work that “contributes to improving race relations in American society and furthers the broad social goals of the U.S. Supreme Court’s Brown v. Board of Education decision of 1954,” and the 2007 Jackson Prize for Poetry, awarded by Poets and Writers. She is a professor at Yale University, and for the academic year 2007-2008 she is a fellow at the Radcliffe Institute for Advanced Study at Harvard University.
In this poem, Alexander addresses students of poetry--all of us, if we count speech as poetry. She refers to Sterling Brown, a professor at Howard University and Harlem Renaissance poet. This poem asserts that "I," within poetry, is always a dramatic creation. She asks writers to look beyond cliches to find an authentic "human voice."
Ars Poetica #100: I Believe

Poetry, I tell my students,
is idiosyncratic. Poetry

is where we are ourselves,
(though Sterling Brown said

for the shell that snaps,
emptying the proverbial pocketbook.

Poetry is what you find
in the dirt in the corner,

overhear on the bus, God
in the details, the only way

to get from here to there.
Poetry (and now my voice is rising)

Poetry (here I hear myself loudest)
is the human voice,

and are we not of interest to each other?

In the Forest of Paradoxes by Jean-Mari Gustave LeClezio

An Actual Kansas Poetry Reading and Christmas Cookie Eating Party is on Sunday Night at 7 p.m. at the lovely Gallery 6. This Actual Kansas features two tireless poets who have found their ways near Kansas,.

Matthew Henriksen edits Typo & Cannibal Books. Recent poems appear in The Cultural Society, Third Coast, Handsome Journal, and Poemeleon. He recently moved back to Fayetteville, Arkansas, from Brooklyn, but like many good poets, he is a native of Wisconsin and an avid baseball fan.

Jordan Stempleman is the author of Their Fields (Moria, 2005), What's the Matter (Otoliths, 2007), Facings (Otoliths, 2007), The Travels (Otoliths, 2008), and String Parade (BlazeVOX, 2008). Individual poems have recently appeared or are forthcoming in Big Bell, Court Green, The Hat, Jacket, and New American Writing. He lives in Prairie Village, Kansas, teaches at the Kansas City Art Institute, and is the Associate Editor of The Continental Review.
Posted by Denise Low at 8:10 AM 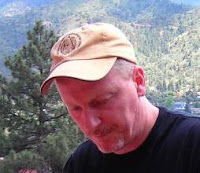