DL: Lindsey, you and I have had parallel lives, as we lived in the Kansas City area for decades, and now we find 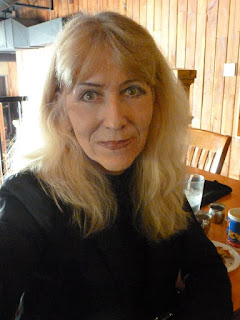 ourselves on the western edge of the continent in Oregon and California, respectively. How has the move affected your writing life?

LM-B: Every morning, I am blessed to look through our living-room “picture” window and be mesmerized by beautiful foothills a few blocks away. Between our home and those hills, two-story, clapboard houses, circa 1905, their chimneys often puffing miniature clouds of smoke from wood-burners, create a scene from another century. It’s as if I live inside a greeting card, especially during the Christmas season when many neighbors edge their houses with lights.
Thus, those foothills whether draped with snow, spring flowers and greenery, or the rusty browns and mauves of autumns, call me to write about them. So I do. In fact, a poem I wrote within the last year, entitled “No Exit” (originally “The Foothills Snow”) is one where I focus on those surrounding hills in lieu of using them as a backdrop. I stole the title from John-Paul Sartre, but in my poem, the “no exit” theme is more positive because in it the persona mentally moves from Mount Emily’s foothills to the Rockies, (where I once lived), onward to the Alps, and lands back in La Grande—home. (This poem will appear in 365 DAYS: A Poetry Anthology Volume 3, so I can’t yet share it here.)

DL: I think of your work as being very descriptive of your surroundings, complicated by mythic connections. Your Jim Morrison book has vivid road scenes as framework for an apotheosis of this inter-dimensional rock personality.

LM-B: Thank you. Along with giving me visual images, setting often inspires the rhythms and sounds in my poems, especially when I write about water settings, whether they lie beside a lake or an ocean. And of course, the sea pulses with and flashes mythic allusions.
A poetry teacher once restricted my classmates and me from using the word, “mountain,” because its meaning is “cliché,” he said. I understood his point. Yet, I also discovered sneaking “cliffs” and “hills,” even “foothills,” into poems did not incur his wrath. He merely wanted to challenge us to use words beyond the standard ones. (He also liked Anglo-Saxon words, like “jut” and “cut,” which work well with cliffs and ridges that jut along the horizon and emulate cardboard layers of rock.)

DL: You have such a vivid style. Do images come early in your writing process, or do you add or amplify them in later drafts?

LM-B: Again, thanks, Denise. I am honored that such a master of describing the land has referred to my description as “vivid.” Recreating vivid imagery in a reader’s mind fulfills me. I admit sometimes it seems easy: the visual images flow. Other times, the auditory images seem to roll off my lips.
Yet, there are the other times, when I write a “stick figure” poem that lacks muscle—rather like that 95-pound weakling in those old “muscle-builder” advertisements. For example, “That Day in Williamsburg,” the opening poem for Standing on the Edge of the World (Woodley Press/Washburn U 2008), started out as a stick figure weakling back in 1976. Although I tried revising it over and over again at the time, it didn’t quite click. Nevertheless, I kept it. I wanted to retain a scene that occurs in it—and some of the imagery of Williamsburg.
Then, in either late 2001 or early 2002, I came across that old attempt. This time, the rhythms of the ocean started taking over my rhythms as I revised it. The poem grew into something strong. I wrote more drafts and worked on it until it came alive—and the last half of the final stanza went to the imagination realm. Finally, the poem passed the rigid Carl Rhoden acceptance test. (He’d claimed I had to “earn” that last line, which came before the few lines preceding it.) John Eberhart, then The Kansas City Star’s Poetry Editor, read it, liked it, and published it (July 14, 2002).

DL: Do you see any influence of your legal training on your creative writing? I would say there is precision.

LM-B: I agree that both poetry and the law require precise language. In the law, the difference between “and” and “or” can be tremendous. Nevertheless, although legal language must be exact, it often lacks rhythm. Thus, the legal script varies so much from flowing and “singing” as poetry often does, I find the legal lexicon often drags me away from writing good poetry. Besides, such teachers as Jim McKinley, David Ray, and Dan Jaffe stressed being precise (when writing poetry or fiction) that I entered law school with that goal.
Moreover, law school remains my most arduous intellectual experience. It was boot camp of the mind.

DL: Would you share a poem and then describe what success you feel you had with it?

LM-B: Here’s one that made me feel successful for various reasons: 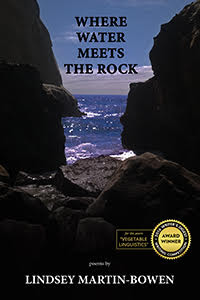 1
Some sprout in earth—dirt,
rich mulch, where molecules
are born, split and fuse into more
cells, then sweet potatoes, carrots,
beets, and rutabagas—roots—
vegetable limbs sinking into blackness,
growing deep, building skin to protect
soft meat from animals and elements.

2
Some blossom—broccoli, cauliflower—
miniature coiffures of granny hair—
and shimmer with dew early during
June and July when morning
glories bloom and climb gates. These
veggies stay awake, feel wind against
their heads, wait for the perfect
hour before they lie in beds.

3
Others are towers—monuments
of phallic energy: Asparagus
stems stretch toward the sun,
artichokes spit spiky leaves
at the moon, and celery stalks
grow ridges for strength.
And can we name sugar cane
among these solid shoots?

4
And then come the fungi:
mushrooms bloom in wet
places, show button faces
in spaces where many
dare not step.
Amanita muscaria—no, not yet.
Published in Where Water Meets the Rock (39 WEST Press 2017, first published in I-70 Review)
First, I surprised myself because it was the first time I wrote about vegetables (in poetry), and the humor appearing in the double-entendres made it fun to write. Then, I realized the poem also contains imagery and sound, and another “layer” of meaning. So for fun, I submitted it to the 2016 Writers Digest 85th Writing Competition in the “free verse” category. Later, I learned that the contest received 6,000 submissions (including all three poetry categories). At the same time, I learned that I didn’t win—but I did receive an “Honorable Mention.” Writers Digest also sent a gold Award Winner seal to place on any collection containing the poem. Even if it’s only an honorable mention, out of a huge number of competitors, the poem caught someone’s eye. That indeed was a pleasant surprise.
Dr. Lindsey Martin-Bowen teaches Criminal Law and Procedure and American Court Systems (online) at Blue Mountain Community College in Pendleton, Oregon. Until August 2018, she taught writing, literature, and Criminal Law at Metropolitan Community College-Longview and taught at the University of Missouri-Kansas City 18 years. Her most recent poetry collection, Where Water Meets the Rock (39 West Press 2017) contains "Vegetable Linguistics," which received an Honorable Mention in the Writers Digest's 85th Annual Writing Competition (2016). Her previous collection, Crossing Kansas with Jim Morrison, won the "It Looks Like a Million" Award for the 2017 Kansas Authors Club competition. The book is an expansion of her chapbook named a finalist in the 2015-2016 Quills Edge Press Chapbook Contest. "Bonsai Tree Gone Awry" from Inside Virgil’s Garage (Chatter House Press 2013) was nominated for a Pushcart Prize. This collection was also runner-up in the 2015 Kansas Authors Club Nelson Poetry Book Award. Woodley Press (Washburn University 2008) published her first full-length collection, Standing on the Edge of the World,  which McClatchy newspapers named one of the Ten Top Poetry Books of 2008. Paladin Contemporaries released her novels Rapture Redux (2014), Hamburger Haven (2009) and Cicada Grove (1992). Her work has appeared in New Letters, I-70 Rev., Thorny Locust, Tittynope Zine, Bare Root Rev., Coal City Rev., Flint Hills Rev., Amythest Arsenic, The Same, Silver Birch Press, Phantom Drift, The Enigmatist, Rockhurst Rev., Black Bear Rev., Little Balkans Rev., Kansas City Voices, Lip Service, 11 anthologies, and others. With Dennis Etzel, Jr., she edited Gimme Your Lunch Money: Heartland Poets Speak out against Bullies (Paladin Contemporaries 2016). She holds an M.A. in English (creative writing emphasis) and a Juris Doctor. Lindsey.Martin-Bowen@outlook.com