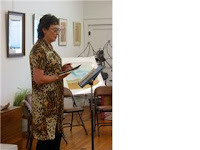 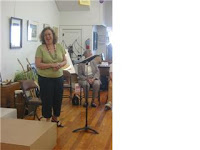 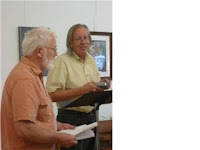 Kyle of Pueblo, Col., reads at the open mic

From an email to Caryn Mirriam-Goldberg:

"I wanted to let you know what had really struck me in your poem -- and yay, that gave me a chance to go back and be with it again this morning. What I think I love is that it is, really, a "being" poem, a life poem. Completely human. Why do we keep asking? That last line is so startling and right, right, right on the money. So it really gets me in my heart, after truly delighting my head, and my writer soul -- like I barely can finish it because observations and the words you choose make me want to write. Seeing the space but not figuring in the space -- precise and incredible way of describing that just woke up disorientation. "wet as fire" -- man, things like this thrill me and I get almost breathless with wanting to try it myself. In the second stanza, I enjoyed wings and thunderheads, but was really grabbed when that led to a crashing car, a lamp post, slivering bark .... what did wake the narrator? I really like that you include the car, move into the human world. Third stanza, here, your word choice especially grabs me. insects ... like breath! birds LOOSEN the sky! Wowee -- how'd you do that? Then again, you go human, kisses stop. And then, oh, those cracked stones, a long time! And I just wasn't expecting where that stanzas goes -- to the minutae, to the "this is all it really is" .... And maybe that's what wakes us up most often, who knows. I just love it Caryn, and have printed it out and will keep it forever as something to aspire to. Thanks for the inspiration! Mary"

Reprinted from the Chronicle Review

Judith Roitman's first full-length book selects from her chapbooks Diamond Notebooks (nominative press collective) and Slippage (Potes & Poets); in addition she adds another hundred or so pages. This is a generous collection of almost 200 pages.

Her inventiveness is apparent in every piece, as well as leaps--not just from conscious to subconscious in the Robert Bly sense, but leaps as in the sense of reality colliding in too-real, too-unexpected combinations. She is an original.

I like how the pronoun "you" slides between determinate and indeterminate. Is this the impersonal "one," as in "you know"? Or is this a second person she addresses? Or the reader, you?

No easy answers with this poet. And another oddity: the book will be for sale on the Target website. Has Lee Chapman of First Intensity signed a deal with Target? Mass distribution?
I never know what to expect next.

Here are blurbs from the back cover:

"With a mind opening up to anything and everything, Judith Roitman records the living facts of direct personal experience as they happen. She does this with the discipline of straightforward, simple language, '... although the temptation is always to hold onto something ... but still the refusal to change anything, not even one word, as when the mind has stopped noticing that it notices prematurely...' Even when they are framed by the memory or narrative, events or words are allowed the seemingly absurd juxtapositions of different levels of interconnectedness. A brilliant collection"--Janet Rodney.

"Roitman's distinct and elegant line runs through a large variety of forms, breaking now at close intervals, now at deep breaths, now at the margin, now at the period. The line disappears altogether, into white space that is equally distinct, leaving the words in array. Then this unbroken space becomes a matrix for the whole. The result is a poetry of ongoing spiritual awakening, continual without progression; a redemption from the 'false hope set up by grammar' whereby one is not so much blessed as nonplussed. Which is enough"--Cyrus Console.

One of the most active poets in Kansas is Lawrencian Caryn Mirriam-Goldberg. She conducts writing workshops and readings across the state. She teaches poetry to journal keepers, songwriters, lower-income youth and adults, and cancer survivors. As a professor in a low-residency college, she reaches students across the nation. Further, she is a founder of the transformative language arts curriculum, which promotes spoken and sung language as “a tool for personal and community transformation.” She has a global perspective on poem-making.

Mirriam-Goldberg’s verse plumbs the depths of consciousness. In “Spring Song” she situates the poem between waking and dream states. The poem also hovers between night and day; between winter and summer; and between imagination and reality. Sky, gravity, trees, birds, and stones are elements of nature—and so also are moments like sudden waking from a dream and love. The ending image of a stone, solid yet carrying an internal crack for years, is yet another paradox. What seems solid may shatter at any moment. This is fertile ground for the poet.

What it is to wake at night not watered down
in overdrawn voices from the day, to see the space
and not figure in the space, to fall backwards
in a dream and realize it’s a dream?

What waits, wet as fire, on the end of the line?
The rushing of wings, the billowing of thunderheads,
the crashing of car into lamp post, the slivering of bark
from tree, the waking suddenly for no reason?

Meanwhile, insects reproduce themselves like breath,
birds loosen the sky with flight,
stratus clouds streak across the moon,
kisses stop, and stones break apart
so easily that it’s clear they’ve been cracked inside
for a long time. Each life a transference of water.
Each act just a way to move light around.
Even knowing this, why can’t the heart stop asking?

Education: Caryn Mirriam-Goldberg was raised in Brooklyn and Manalapan, New Jersey. She came to the Midwest to attend the University of Missouri (B.A. History, 1985) and the University of Kansas (M.A. in Creative Writing 1988 and Ph.D. in English, 1992).