Poetry in July: Not Just an April Kind of Thing

Dear Poetry Friends,
Yes, life continues after one has been a poet laureate. Governor Parkinson was gracious enough this last month to award me a certificate for being poet laureate, and I had my photo taken with him. I also had a chance to stop by the Kansas Center for the book, located in the Capitol building, and visit with Roy Bird, its director.

I also read poetry 12 months a year, not just in April. So here is another great Kansas poet: Victor Contoski. He was one of the first poets on my blog, but I never did a formal broadside of his work.

Congratulations to Caryn Mirriam-Goldberg, who can be reached through the Kansas Arts Commission website. And Jonathan Holden’s DVD of shoptalk is available now (through the KAC), with wonderful documentation of him reading and discussing poetry.

Best,
Denise Low
Posted by Denise Low at 8:21 AM

My first college teacher of poetry was Victor Contoski, a professor at the University of Kansas. He encouraged his students unconditionally; he insisted we purchase copies of literary magazines and imagine ourselves in their pages; and he encouraged us to learn how to write reviews. Contoski also taught his students to read Midwestern writers closely, especially William Stafford, Robert Bly, and Ted Kooser. He was greatly influenced by his Polish wife’s experiences during the war and his own experiences teaching in Poland during the Cold War as a Fulbright scholar. A gallows humor underlies the outlook of survivors, and this humor seeps through Contoski’s works.

Contoski writes haunting, vivid and unsettling poems about rain, stars, frontier history, and myths. “Sunset” occurs during a somber time of day. Its setting, the Western frontier, is a backdrop for Spanish horsemen, nursery rhymes, and western cowboy heroes who die. Finally, the European folklore figure Jack enters into the grasslands landscape, reincarnated as a Wild Man figure, and now as comfortable with a cottonwood tree as a beanstalk. And the final victor is nature itself, the constantly moving sun.

Since long before the white man
rode out onto the prairies
the sun has been going down.
A towering cottonwood sways in the breeze
rocking rocking the cradle in its branches.
The hero’s eyes turn glassy.
His hand waves vaguely
toward something in his breast
as his knees buckle.
The giant coming down the beanstalk
feels it start to sway beneath him.
He looks down and sees Jack
with a silly grin and a hatchet
looming suddenly larger and larger
as the sun over Kansas
goes down and down and out.

Education: Victor Contoski received a BA in Ancient Greek and MA in English (University of Minneapolis); and a PhD in American literature (University of Wisconsin 1969). 1961-1964 he lived in Poland, as a Fulbright professor. As a professor at KU from 1969 to 2009 he won the HOPE award.
Career: Contoski’s books are Astronomers, Madonnas, and Prophesies (Northeast/Juniper Books, 1972); Broken Treaties (New Rivers 1973); Names (New Rivers Press 1979); A Kansas Sequence (Tellus/Cottonwood Review Press 1983); Midwestern Buildings (Cottonwood Press 1997) and Homecoming (New Rivers Press 2000).
Posted by Denise Low at 8:15 AM 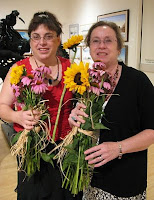 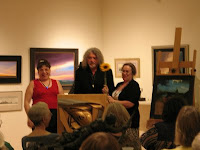 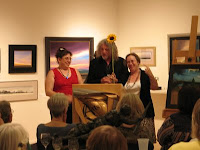 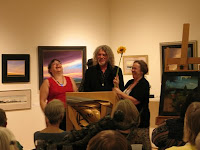