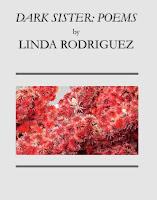 “I want to say so much about Rodriguez’s poetic gifts. What talent! The most accomplished poet of our generation. A poetic voice for our time.” ~Rudolfo Anaya, author of Bless Me, Ultima and Albuquerque

Dark Sister: Poems gives voice to the living presence of Cherokee teachings and history, passed down through Linda Rodriguez’s family. Rodriguez, author of the exciting Cherokee detective series featuring  Skeet Bannion (St. Martin's/Minotaur Press), turns to family stories and memory for her third book of poetry. She testifies about the borderlands that still exist between Cherokee people and heirs of Andrew Jackson’s soldiers; between Americans and their British Isles forebears; and between the frontera of Mexico and southern plains states of the United States. She spares no quarter as she remembers history and its embodiment in the present. She tells compelling stories about the last Beloved Woman, Trickster, and other traditional figures with the sure hand of an oral storyteller and with the lyrical intensity of a skilled poet. In Dark Sister, the ageless Cherokee language and Spanish blend with English to explain the complexities of life as a mixed-blood woman in the 21st century. This accessible book appeals to adults and young adult audiences with family stories, love stories, just-so stories, and more. 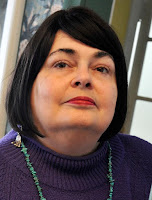 For her previous books of poetry, Skin Hunger (Scapegoat Press) and Heart’s Migration (Tia Chucha Press), Linda Rodriguez has received numerous recognitions, including the Thorpe Menn Award for Literary Excellence, the Midwest Voices and Visions Award, the Elvira Cordero Cisneros Award, the 2011 and 2014 ArtsKC Fund Inspiration Awards, and Ragdale and Macondo fellowships. Rodriguez has edited four anthologies, most recently The World Is One Place: Native American Poets Visit the Middle East, co-edited with Diane Glancy. Her poetry has appeared in many national and regional journals and on Garrison Keillor's The Writer's Almanac, The Poet and the Poem from the Library of Congress, and New Letters on the Air. Her award-winning Skeet Bannion novels, all from St. Martin's/Minotaur, are: Every Broken Trust, Every Hidden Fear, and Every Last Secret, which won the 2011 St. Martin’s Press/Malice Domestic Best First Traditional Mystery Novel Competition and was a Barnes & Noble mystery pick, featured by Las Comadres National Latino Book Club, and a finalist for the International Latino Book Award.

translation Sappho: Complete Poems and Fragments (Hackett) for the new issue of New Letters. Here is a brief excerpt:
"Lombardo deliberately composes pages of the least complete fragments to preserve placements of text. This creates a field of inverse lacuna, as the few remaining words appear within the larger gaps of loss. This is a collage effect. Susan Howe’s 2017 book Debths has a similar, deliberate effect. She composes pages of white space and text clippings, some lines smudged beyond recognition. She explains the bricolage sections: 'Our eyes see what is outside in the landscape in the form of words on paper but inside, a slash or mark wells up from a deeper place where music before counting hails from' (22)." The complete text of the review is a PDF on the New Letters website.  New Letters v. 84, no. 1 (2017-18): 131-4.