Israel Wasserstein writes "How It Is for Eyeless Things in Caves" and more in prize-winning book.

Israel Wasserstein of Washburn University will read from his book This Ecstasy They Call Damnation and new works April 24, Thurs., at the Raven Bookstore in Lawrence, 7 p.m., with Joseph Harrington. He is a life-long Kansan, and that mythos/landscape enters his work in diction as well as topics. In an interview with Miranda Ericsson, he says, “I think open landscape, and wide spaces under a sky that seems to go on forever, are always there in my poetry, even poems that don’t have anything directly to do with landscape.” In this poem, he seeks the inverse of sky, deep cave topography. Rather than sight, touch becomes the primary touch. For a sky person, this is a phantasmagoria

How It Is for Eyeless Things in Caves 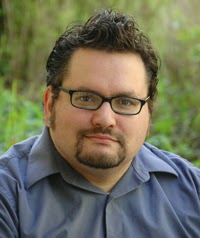 Maybe they wander in, foraging deep down
for food or seeking shelter, and they get lost far
beneath the surface. Or they decide
they like it in the dampness
of the earth, where predators venture
rarely, and sunlight does not scorch
them.
Slowly they forget
the things they saw above, the harsh light
receding into memory,
into carefully forgotten dreams.
Then they lose sight itself
and creep along, cold as stone.
Their children are born
knowing nothing else.

Wasserstein says of his new work, in his interview for Ericsson and the Topeka and Shawnee County Public Library: “A lot of what I have is more explicitly autobiographical than much of what I’ve done previously. And there are a series of poems in the voices of villains, especially horror movie villains. I’ve long loved persona poems, and I’m engaged with pop culture and interested in marginalized voices, and I think these poems allow me to explore all of that at once.”
~~~~~~~~~~~~~~~~~~~~~~~~~~~~~~~~~~~~~~~~~~~~~~~~~~~~~~~~~~~
Born and raised in Topeka, Kansas, Israel Wasserstein received his BA in English from Washburn University, and his MFA in Creative Writing from the University of New Mexico. He is currently a Lecturer in English at Washburn University. . His work has been published in Flint Hills Review, Red Mesa Review, Border, seveneightfive, Senses, Fickle Muses, Inscape, and others. He has also contributed work to the anthologies Begin Again: 150 Kansas Poems, A Face to Meet the Faces, and Earthships. His poetry collection, This Ecstasy They Call Damnation, was published in 2012 and received a Kansas Notable Book Award.
Posted by Denise Low at 12:39 PM 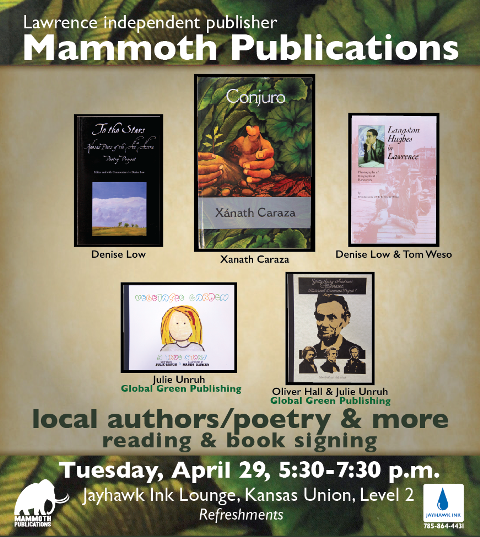 Join Mammoth authors and publishers for a celebration of Mammoth’s 10th anniversary with readings by Xánath Caraza and Global Green partners Julie Unruh and Oliver Hall. Denise Low and Tom Weso, co-publishers of Mammoth and K.U. graduates, will read from Mammoth books. Refreshments will complete this end-of-the-workday event.  Other Mammoth authors will be introduced, including Stephen Meats.
Posted by Denise Low at 10:09 AM