Louis Copt Speech supporting Ks. Arts Commission, under attack by Gov. Brownback, who wants to privatize it under handpicked board of trustees. Copt says: "Arts funding did not create the budget crisis" "Now is the time to increase arts funding" (remember the WPA anyone?) and more

Back then, "Calculus"
was a scary college word,
and yet we studied it
from the back seat, we studied
the rates at which
the roadside trees went striding
past the hazy
farther trees, the hazier
a tree the farther off
it stood.
The ghostliest,
far across the fields,
hardly moved at all. A line
of spectators, they'd turn
as if to watch
us pass
before fog erased them.

This resonates with H.L. Hix's philosophical etudes in verse--a conjunction of disciplines.
Jonathan Holden’s poetry travels as far as words can go. He arcs backward to the Roman verse tradition in his poem “Ars Poetica,” which recalls Ovid, and he anticipates the future in “Fahrenheit 451.” He comments on the pastoral in “Cirrus,” and he examines contemporary culture in poems about artists Edward Hopper and Andrew Wyeth. Mathematics is another of Holden’s fluencies. He uses this meta-language in poems about his physicist father. Like many poets, Holden celebrates youth and observes the decline of age, and he celebrates love. In sum, he maps the possible range of human consciousness.
We need Holden’s wisdom. His voice is kindly and, as Ted Kooser once noted, “unaffected.” He describes in his memoirs how he grew up in a household of geniuses—his father, a research physicist for Bell Telephone labs, entertained Nobel Prize winners often; his twin brother is a long-time film and music critic for the New York Times. Holden has written how he learned to recognize brilliant people, but further, this book shows how he himself is a genius poet.
Ultimately, Holden teaches us how to live richly. In “Hunting for Morels” he concludes:

Then the earth offers itself
to us anyway, all
its tender thumbs, the other
half of our words,
and we take whatever we see.

This superb wordsmith also understands how language names the cosmos inexactly, with slippage between discrete experiences and more generalized labels of words. He seizes the opportunity to not only articulate experience, but also, in that interstitial space, to glamourize—grief, love, history, and beauty.
Holden is an omnivore, capturing in his nets all the variegated experience of the 21st century. To his credit, he is not a cynic. He illustrates how moments of grace and sin exist simultaneously in an equation, not canceling each other out. In accepting oppositions and contradictions, Holden advocates a calculated optimism.

Glamour is available through mammothpubs@hotmail.com, Amazon or Barnes & Noble, Ingrams, and Kindle version is nearing completion. It is available at Watermark Books in Wichita and Strecker-Nelson Gallery in Manhattan--for now. Cover illustration by Thomas Weso of Mammoth Publications-- http://www.tomweso.com/ and more on Holden at http://www.jonathanholden.com/
Denise Low
Posted by Denise Low at 8:06 PM

Review of Things Come On: An Amneoir by Joseph Harrington 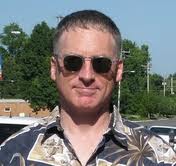 Things Come On: An Amneoir by Joe Harrington is one of an emerging group of creative works that maps the interplay between media and human consciousness. Sherman Alexie’s short story “Any Little Hurricane” is an example of a story told by a young boy about an out-of-control party that resembles hurricane formation on the weather channel. Reality and TV images of a category-four storm mix into one narrative. Similarly, Harrington recounts the story of his mother’s battle with breast cancer in the context of the Watergate Scandal, which was the news event at the time of his mother’s death. His mother died the day Nixon resigned. He combines the words “amnesia” and “memoir” to create his subtitle “An Amneoir.” This suggests the slippage of electronic and remembered realities.

Harrington creates various strands of images and narratives that continue through the story in a way that reignites the experience of a boy’s loss of his mother. To read this book is to become engaged. Another way to understand the book is to see it as a graphic novel that has broken out of the linear-cell comic book/graphic novel format. “Mixed media” is not a term that specifically can describe the cloud of photographs, typeface variants, medical records, interviews, TV transcripts, diagrams, scanned letters, newspaper clippings, graphs, and more. Yet Harrington maintains control, so the movement from diagnosis to loss is gripping.
The book guides the reader into a consciousness where distance is impossible. Watergate language of cover-up blends with medical language of cover-up. The half-truths told to patients by doctors of the mid-20th century overlap those told by the government under Nixon. The implication is these half-truths continue to be told. Public language interacts with the very core of human identity—language—and implications are as profound as those in Aristotle’s Athens.
This is not a grim book. It is exploratory: tentative and sure at the same time, suggestive and definitive. It is, in short, fine poetry of a new cast order. Here is a sequence that illustrates the intermixing of personal and public realities in the mind of the young narrator. The two quotations are from Watergate testimony of Sam Ervin (first) and Gordon Liddy’s secretary Sally J. Harmony (second).

Q: So you would have been ten, when your mother was diagnosed? What did you know and when did you know it?
“. . . whisked away under cover of darkness and forced to submit to an ordeal cloaked in secrecy . . .”
(mugging squads, kidnapping teams, prostitutes, electronic surveillance, intercepted aircraft communications, espionage, shredding)
“I did know absolutely nothing”

Harrington also authored Poetry and the Public: The Social Form of Modern U.S. Poetics, which examines poetry in newspapers and other public exchanges. (Wesleyan Univ. Press, 2002) and poetry chapbook Earth Day Suite (Chicago: Beard of Bees Press, 2010). Poems are published in Hotel Amerika, Otoliths, Fact-Simile, and Tarpaulin Sky, among others. He is a Pushcart Prize Nominee (2011), Hall Center for the Humanities Fellow (2010 and 2000), and Fulbright Distinguished Chair at the University of Groningen, The Netherlands (2005). -
Posted by Denise Low at 8:52 AM