Much gratitude to Carolyn Lee Wright for her extended review, "Jackalope Walks into a Bar," in New 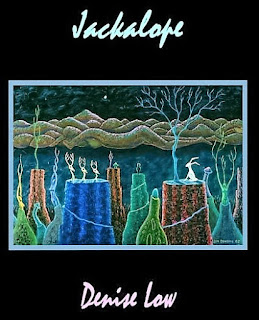 Letters. She extends the lore of Jackalope in important ways in addition to responding to my collection of short pieces--fiction or no?--in this book from Red Mountain Press. Many thanks! And the book is a steady seller at Small Press Distribution.
The review is an artful piece, and it includes this commentary:
"In these interstices between fantasy and creatively tweaked fact, Low keeps her tone both lyrical and light; but shining through the humor—literary and Indian inside jokes, bawdy anecdotes, and gentle fun-poking at contemporary and historical indigenous and Anglo cultural figures—are glimpses of the very real oppression to which such oblique humor is one survival response.  In “Jackalope Walks into Custer’s Last Bar,” Jaq is offered the fanciest drink (“Custer’s Custard”) and is regaled with bitter anecdotes and jokes targeting this last-in-his-West-Point-class Civil War hero, who turned genocidal criminal against the plains tribes until his final demise at the Battle of Greasy Grass (aka Little Bighorn)."
Posted by Denise Low at 12:16 PM

DIAMANTES: How To Write a Diamond

This is from my April workshop cinquains, a mini-discussion of "diamante" poems, with appreciation for Wyatt Townley. When poet laureate of Kansas, she used cinquains as a project.


As a starting point for cinquains, take the “diamante.” This form, popular in public school poetry classes, is a diamond-shaped poem. Its five lines follow a set syllable count: 2+4+6+8+2 syllables. Here is one formulaic instruction:
Line 1 - a one-word title (or 2 syllables);
Line 2 - a two-word phrase describing the title;
Line 3 - a three-word phrase describing an action relating to the title;
Line 4 - four-word feeling phrase about topic;
Line 5 – a one-word synonym for the title.
This form is pervasive throughout U.S. schools, usually centered on the page, and it can result in simple (and bad) poems like this:
Dog-breath
Rank drools
Fetid meat clinging
Disgusting stink spreads
Yuck!
This is an informal entry into this form. It does reduce the poem to the essentials of the “envelope” construction, with first and last lines enclosing the concrete details. It shows focus on the first line.
A more dignified variation is the American cinquain, very similar to the diamond version, has more attention to the turn at the end. Adelaide Crapsey (1878-1914), an American poet influenced by Imagists, invented the form, based on the tanka. Here is one of her more dignified examples of a cinquain from her book Verse (1915):
Snow by Adelaide Crapsey

Look up…
From bleakening hills
Blows down the light, first breath
Of wintry wind…look up, and scent
The snow!

The form is syllable count: two syllables in the first and last lines (trochees); and four, six, and eight syllables in the middle three lines in iambic rhythm. Crapsey’s poems consider the transitory nature of human life, due in part to her tuberculosis.  Her book Verse, of cinquains, was published in 1915, after she died. She had followers during her lifetime, but most people have forgotten works, which are seldom reprinted in anthologies. Nonetheless, her contribution to poetics is significant: she invented this popular form.

Wyatt Townley, Kansas Poet Laureate 2013-2015, used this form for an online project. The Emporia Gazette printed her column about cinquains. She has this to say about the five-line form: “It’s a little like writing on a postage stamp.” Here is one of her own American Cinquains from her serialized newspaper project:
Body by Wyatt Townley
Which breath
is the last this
one or the one after
all you have undergone what’s not
to love