Congratulations to Kim Shuck, author of Smuggling Cherokee: Poems, who is 7th San Francisco Poet Laureate! https://sfpl.org/releases/ She writes Tsi-Tsu (Rabbit) narratives and does beadwork, basketry, Cherokee language, and more. From the Hanksville website: “As a poet Kim has read her work around the United States. In late summer and fall of 2005 she toured through Jordan with a group of poets from many countries in the interest of peace and communication. Shuck has read her work on her local radio. She is co-curator of the Spoken Word Series of the Native American Cultural Center. Kim sat for a time on the board of directors for California Poets in the Schools. As a visual artist Kim's work has been shown both in and out of the United States, including shows at the National Museum of Taiwan in Taipei and the Art, Women, California Show at the San Jose Art Museum. She has consulted with museums and galleries around California on the subject of Native artwork. Kim has taught in Elementary Schools, at San Francisco State University and has lectured widely on the subjects of math, art and Native American issues. She has been a teacher since, in 3rd grade, she taught fellow classmates a series of short lessons in crochet.” 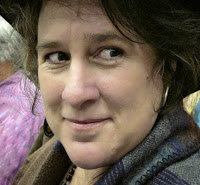 is multi-talented, with word arts,

Her Wiki-biography: “Kim Shuck: Cherokee poet, author, and artist. Kim Shuck is a Native-American poet, author, and bead work artist who draws from Southeastern Native American culture and tradition as well as contemporary urban Indian life. She was born in San Francisco, California and is a member of the Cherokee Nation of Oklahoma. She earned a B.A. in Art (1994), and M.F.A. in Textiles (1998) from San Francisco State University. She has taught American Indian Studies at San Francisco State University and was an artist in residence at the De Young Museum in June 2010 with Michael Horse.”  https://upclosed.com/people/kim-shuck/ 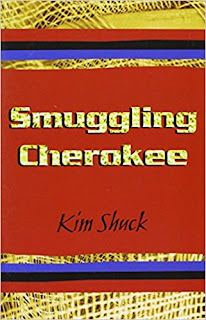