Friend and poet David Ray contributed this to the Mammoth Publications Facebook page recently, and he gave permission for me to reprint it here. Mammoth is a small literary press co-published by Thomas Weso and Denise Low that specializes in Indigenous and mid-continent authors. (Mammoth is trumpeting for you!) Thanks to David for his attention to Pleistocene elephants and the procession of unfolding lineages. He is one of the most politically astute poets--he and Robert Bly edited the anthology  A Poetry Reading Against the Vietnam War in the 1960s. His commitment has never flagged.


They were small as dolls,
and the elephants they hunted
with spears were small too,
as if to keep that island
and its population between
Australia and Asia
in proper proportion, for
﻿﻿ it too was small and fragile.
Due to volcanic eruptions
and other catastrophes
there was never enough
oxygen for humans
larger than Lilliputans
or elephants as large
as Ganesh, who brings
good luck. In New Delhi
we bought a model of him
in sweet-scented sandalwood.


Sadly, neither species --
humans or elephants --
matured enough
over time to join us
as we strive for Utopia,--
great empires, computers,
cars, planes, telescopes,
space travel, skyscrapers,
and weapons far deadlier
and more impressive
than spears and slingshots.
I would love to sit down
and chat with these “small
archaic humans” and see
what they and the elephants
might think of modern marvels.


David Ray edited New Letters for many years and taught creative writing at UMo.-KC. He has published widely and won awards, including the William Carlos Williams Award (twice), Paterson Award for Literary Excellence (twice), an NEA Fellowship, and more. He lives in Tucson with wife and poet Judy Ray. His most recent book is Hemingway: A Desperate Life.  Here is the publisher’s description: “David Ray’s poetic sequence counterpoints lyric and narrative, major and minor modes of amusement, admiration, and astonishment in beholding Hemingway’s Falstaffian posturings as well as his sufferings.  In the end, the poems express compassion for the 'desperate life' of this 'larger-than-life' personality.”  (Whirlybird Press, 2011, 124 pages, paperback, $12.00  ISBN  978-0-9647053-5-7 . Cover painting by Martha Armstrong, More than red, yellow and blue.)

I'm so pleased at how well the VQR matched my poem "Parallax" with a photo. This is a great series--poets may want to submit."Parallax" by Denise Low
This poem came during a magical full moon over the Flint Hills. This great yellow-orange moon rose from the east as I was driving straight into its yaw. As it broke through mist, it was one of the most powerful images I have ever seen, and it hung for two hours as I drove. Magic happens.
Posted by Denise Low at 10:05 AM 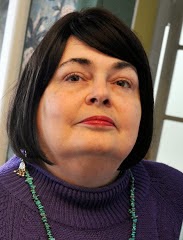 I could not wait to finish the second Skeet Bannion mystery by Linda Rodriguez. I recommend it highly for its entertainment value as well as explication of a Cherokee hero. I couldn't put it down.
Rodriguez is a fine poet and prose writer, and she shares her secrets on her blog,
http://lindarodriguezwrites.blogspot.com/
Also recommended is her guest post on the Guelph Writers Now blog, about how to use lists to keep plot, characters, and setting straight. Sounds simple, but it isn't! She writes,
"I wrote personality and appearance sketches for each character, but in addition, I made a list of each character as s/he appeared with a few words to note key characteristics. I did the same for places in my made-up town. This meant I could look up the full name of walk-on characters easily when I needed to much later in the book. It meant that I could easily look up the important details of the buildings on the campus and the shops on the town square as my protagonist, Skeet Bannion, walked past them or into them."
See all of this good craft essay: http://guelphwritenow.com/2013/06/05/using-lists-in-writing-a-novel/