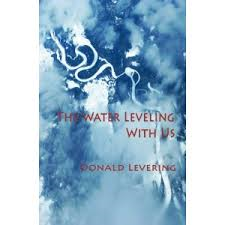 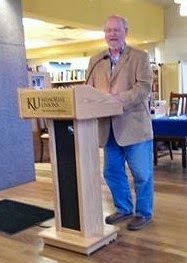 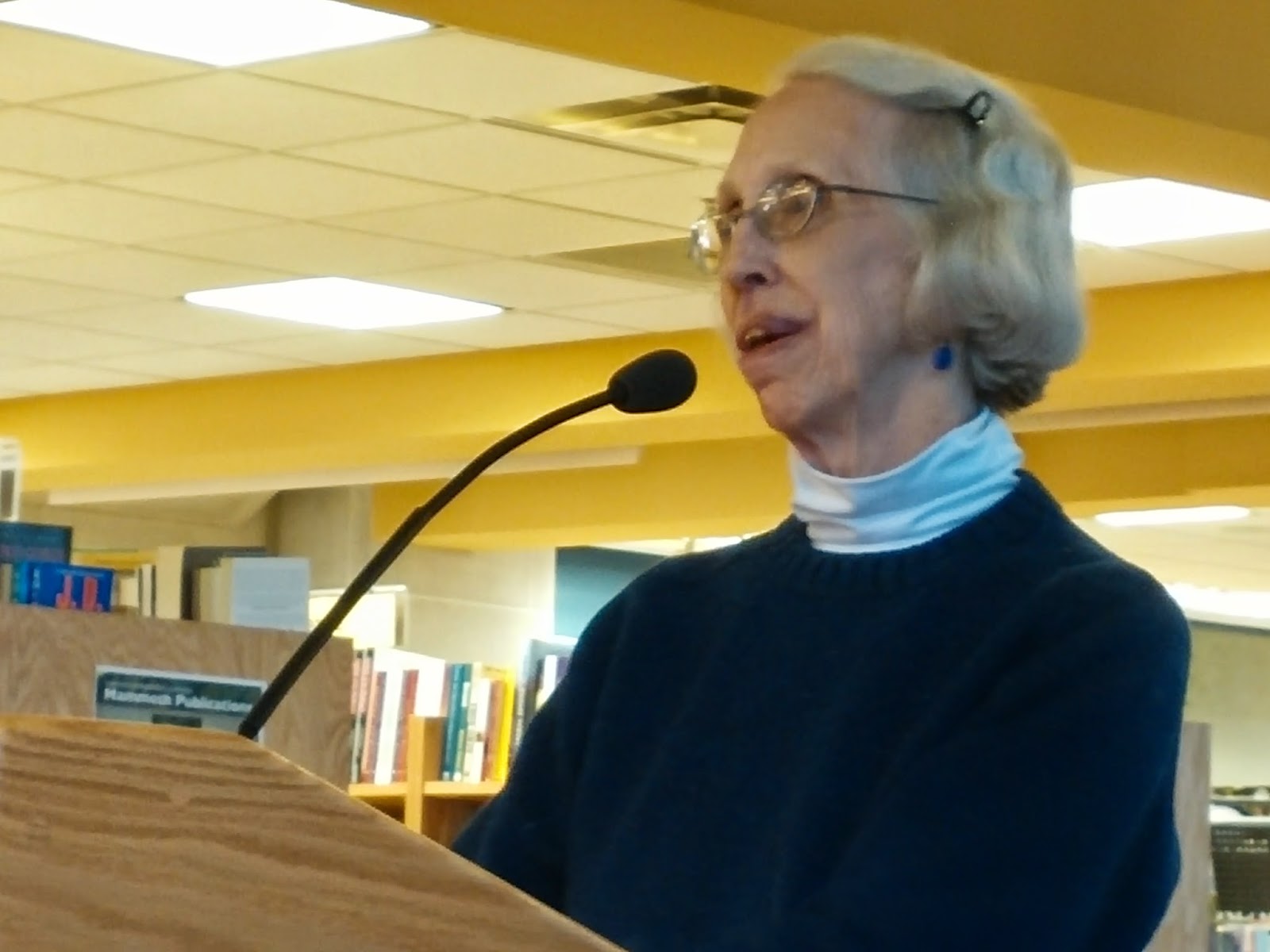 *MAMMOTH READING APRIL 29, 2014, KU STUDENT UNION Jayhawk Ink Bookstore at KU was the site of a Mammoth author reunion and reading. Denise Low opened the event and described how E. Donald Two-Rivers’s book Powwow, Fatcats, and Other Indian Tales was the first Mammoth book in 2003. This was in association with Woodley Memorial Press, where Low was a board member at the time. Then Mammoth became independent, and LANGSTON HUGHES IN LAWRENCE, co-authored by Low and Tom Weso, was the next project. Tom Weso read from the Langston Hughes book and also his new food memoir. 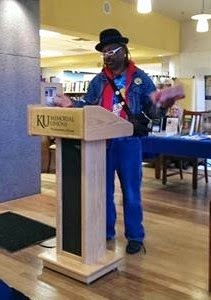 Barry Barnes, author of WE SLEEP IN A BURNING HOUSE, recited poems from his book and announced his participation in the International Cajun and Zydeco Festival in the Netherlands, the next day, with the Ernest James Zydeco Band. His photos on Facebook are amazing. Elizabeth Schultz read from WHITE-SKIN DEER: HOOPA STORIES, based on 1950s stories told to her by Hoopa elders.
Stephen Meats arrived from Pittsburg State University and read from DARK DOVE DESCENDING, his 2013 poetry and fiction book. Mammoth has just reissued a new edition of his book LOOKING FOR THE PALE EAGLE. 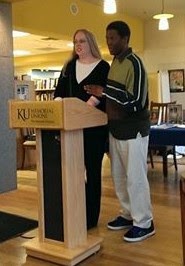 Global Green proprietors Julie Unruh and Oliver Hall showed their books, VEGETABLE GARDEN and GETTYSBURG ADDRESS, respectively, and read from them. Global Green is one of several groups that Mammoth cooperates with by counsel and other publication support. Thanks to them for a generous donation. 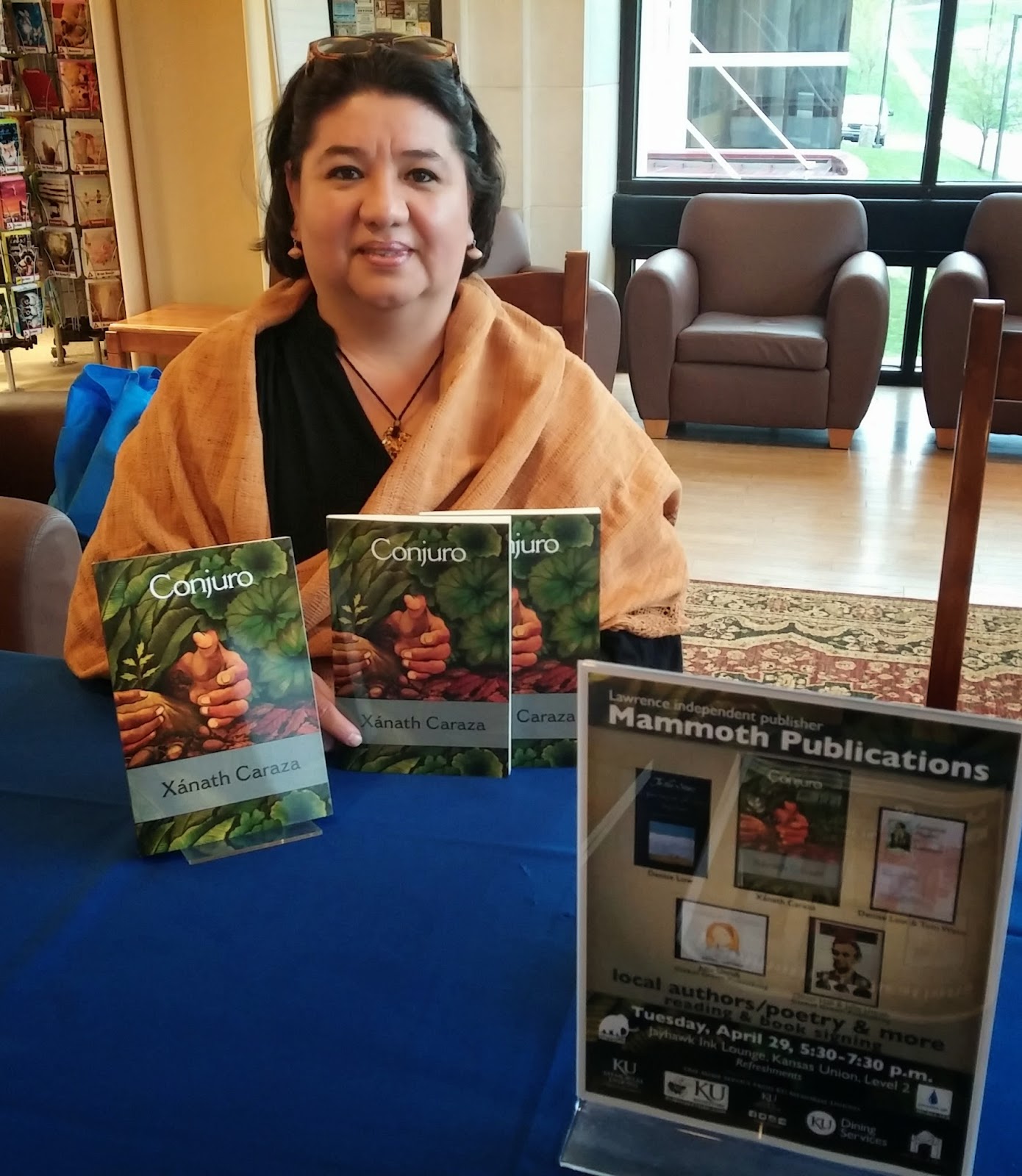 Xánath Caraza finished the event with readings from her first book, CONJURO. Caraza’s awards include Number one Author of the 2013 Top Ten “New” Latino Authors to Watch (and Read) by LatinoStories.com. The International Latino Book Awards 2013 recognized CONJURO for Second Place: Best First Book Written in Spanish; Award Winning Finalist, Multicultural Fiction; and Honorable mention, Best First Book Written in Spanish, Mariposa Award. She has published two more books, What the Tide Brings In (Mouthfeel Press) and Noche de Colibríes: Ekphrastic Poems (2014) if from Pandora Lobo Estepario Press. Mammoth will publish another book of poetry in 2015. Mammoth is honored to be her first book publisher. Lisa Eitner of Jayhawk Ink facilitated the project and provided publicity. This is the second event for Mammoth sponsored by the KU bookstore, and we appreciate the support.
*MAMMOTH ASSOCIATE’S PROGRAM Mammoth has been able to advise several community groups and individuals involved with publishing. Mammoth associates include Global Green Publications, Parcel literary journal, A Kansas Bestiary and its authors, and more.  Look for “Published in association with Mammoth Publications” for this cooperative venture. Congratulations to Global Green Productions for their books VEGETABLE GARDEN, GETTYSBURG ADDRESS, and MLK. JR., MEMORIAL, words by Martin Luther King, Sculpture by Lei Yixin, and Photography by Oliver Hall. The book has been nominated for a Coretta Scott King Book Award. Global Green presented Mammoth Publications with the first copy of the book. We sincerely thank them.
MAMMOTH ANGELS APPEAR! If you have ever wondered what wooly mammoth angels looks like, they are not giant pachyderms with large wings. They are more subtle and appear in human form to us mortals. Two such angels have asked for our catalogue list and then bought every single book. That income has helped us pay for the next book set-up costs. We are not a non-profit, which helps us keep our independence. We appreciate the support of angels and all ordinary folk who buy our books, review them on media, give us encouragement, and otherwise act as angels.
NEW MAMMOTH BOOKS  Robert Day’s TALK TO STRANGERS AND STOP ON BY: Essays on William Stafford and Other Folk of the American High Plains, with an Introduction by Scott Bontz, was published just in time for the Washburn University William Stafford conference, March 30, 2014. Thank you to The Land Institute for a grant to help fund this publication. http://mammothpublications.net/writers-a-to-l/robert-p-day-we-should-have-come-by-water/
Stephen Meats has updated his 1994 collection of poetry LOOKING FOR THE PALE EAGLE and added interviews, revision notes, and a “Letter to a Young Poet.” http://mammothpublications.net/writers-m-to-z/meats-stephen-prose-and-poetry/
Caleb Puckett is the newest Mammoth author, and I hope to meet him one day soon! His FATE LINES / DESIRE LINES is poetry moving among histories and digital media. His experimental poetry satisfies the mind and makes emotional connections. http://mammothpublications.net/writers-m-to-z/puckett-caleb-fate-lines-desire-lines/
NEWS FROM MAMMOTH AUTHORS   Elizabeth Schultz has a new book of poetry, The SAUNTERING EYE, from FutureCycle Press. Join her and Mammoth friends when she reads from it at the Raven Bookstore May 22, Thursday, 7 pm.  Denise Low has a new book of poetry, her first since the award-winning Ghost Stories of the New West (Woodley 2010). MÉLANGE BLOCK (Red Mountain Press), blends Low’s ancestries with history and landscape to create aggregate-like poems. http://redmountainpress.us/melange-block-by-denise-low/ Readings are Santa Fe, June 15, 2:30 pm, op cit bookstore; June 25, Lawrence, Raven bookstore, 7 pm.  Xánath Caraza started a new international poetry project called “US Latino Poets en español.” This online poetry column is published monthly and is a collaboration between the Smithsonian Latino Virtual Museum and Periódico de Poesía. She will be traveling summer 2014 and presenting readings in Spain, Portugal, and El Salvador.  Stephen Meats is working with another Mammoth author, William Sheldon, in preparing a book of interviews with Kansas writers. Mammoth will publish the book in 2015.  Caryn Mirriam-Goldberg is working on three forthcoming books: Poem on the Range: A Poet Laureate's Love Song to Kansas (Coal City Press), Caryn's memoir about the political and geographic journey of her poet laureate years, will be out this summer; Chasing Weather: Tornadoes, Tempests, and Thunderous Skies in Word and Image (Ice Cube Press), her collaboration with weather photographer and storm chaser Stephen Locke, is being released in September; and Transformative Language Arts in Action, the anthology she's co-editing with Ruth Farmer, will be out toward the end of 2014.  Lana Wirt Myers reports she is retiring from her job with the Harvey County Historical Society spring of 2014. She has plans for another book. Her Mammoth book PRAIRIE RHYTHMS: THE LIFE AND POETRY OF MAY WILLIAMS WARD received a Kansas Notable Book recognition from the state library and Kansas Center for the book.

MAMMOTH AUTHORS AND ALLIES, PLEASE LET US KNOW YOUR NEWS, AND WE’LL POST IT IN OUR NEXT NEWSLETTER.