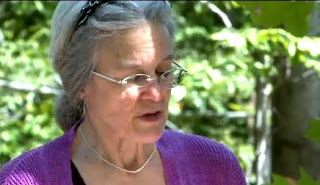 Sharon Olds, one of the most lyrically intense writers of contemporary poetry, has won the 2013 Pulitzer Prize for her book of poems Stag’s Leap (Knopf, 112 pages, Sept. 12, 2012). She tells of domestic life in stories that weave in and out of time frames. The recent book is about the course of a divorce. Previous books are about her birth family and children as well as her former husband.


"I see them standing at the formal gates of their colleges,
I see my father strolling out
under the ochre sandstone arch, the
red tiles glinting like bent
plates of blood behind his head, I
see my mother with a few light books at her hip
standing at the pillar made of tiny bricks,
the wrought-iron gate still open behind her, its
sword-tips aglow in the May air,
they are about to graduate, they are about to get married,
they are kids, they are dumb, all they know is they are
innocent, they would never hurt anybody. . . ."


This view of her parents, before her conception, presents frozen portraits of two young people with an unformed future ahead of them. The “wrought-iron gate” is still ajar, although its presence makes it clear that confinement is pending; this is another frame in the photograph. Its “sword-tips” are ominous. The young man and woman, before parenthood, are tabula rasa, without knowledge of the oncoming pain. The poet enters into the photograph with them, with awareness of their future, and completes their story before it begins. Future and past collapse together, and the narrator creates a present moment:


. . . .  I
take them up like the male and female
paper dolls and bang them together
at the hips, like chips of flint, as if to
strike sparks from them, I say
Do what you are going to do, and I will tell about it. "


She erases time sequence and creates a present moment in which volition is possible. Her resolution is articulation—a great trust in the invisible readers outside the frame of the poem. Her poems create memory wreaths, like the floral arrangements woven from family members' lockets of hair. She takes the past and creates mementos of the present.


Her prize-winning book Stag’s Leap continues to narrate personal relationships. Publishers Weekly begins its review: “Known for her unadorned, emotionally direct, sometimes sexually explicit free verse, Olds has amassed a large and loyal following over 30-odd years and 10 books. In her new collection every poem speaks to the collapse of a 30-year marriage, precipitated by the ex-husband’s affair. Hence the memorable title: “The drawing on the label of our favorite red wine/ looks like my husband, casting himself off a/ cliff in his fervor to get free of me” (17 Sept. 2012).

Bio: SHARON OLDS was born in San Francisco and educated at Stanford and Columbia universities. Her first book, Satan Says (1980), received the inaugural San Francisco Poetry Center Award. Her second, The Dead and the Living, was both the Lamont Poetry Selection for 1983 and winner of the National Book Critics Circle Award. The Father was short-listed for the T. S. Eliot Prize in England, and The Unswept Room was a finalist for the National Book Award and the National Book Critics Circle Award. Olds teaches in the Graduate Creative Writing Program at New York University and is one of the founders of NYU's writing workshops for residents of Goldwater Hospital, and for veterans who served in Iraq and Afghanistan.

I'm grateful to the Kansas City Star for their support of literature, including my "On Poetry" column. Here is the

start of the recent "Western Edges" review, working east to west. This is one of the few American reviews of Illinois/Black Mountain poet Ed Dorn's Collected Works, which was published in England at the end of last year. He spent a semester at Ks. University in 1969, and I was lucky to audit his class and see him around town. He had a huge influence on many of us. Buddy-poet Steve Bunch has been reminding me of that year: Robert Bly, Robert Duncan, and Galway Kinnell were visiting readers. I thought this was normal. Diane Hueter Warner is another fine poet, who spent some time at KU also. Karen Holmberg attended Mizzou. Dg nanouk okpik is a newcomer, and wow, she's amazing. Here is a start, but please go to the KC Star page for the full review.

"The Western frontier appears on the earliest European maps, with sea serpents encircling Terra Incognita. American poets continue to renew myths of exotic territories just beyond the pale of civilization. Publication of Edward Dorn’s “Collected Poems” showcases his seminal revision of the literary West. Books by Diane Hueter Warner of Texas, Karen Holmberg of Oregon and Dg Nanouk Okpik, an Alaskan native, locate ever more remote distances of Western borderlands.Dorn’s thousand-page volume collects all his published and unpublished verse from 1964 to 2009, when he died. In total, the work documents the poet’s reconfiguration of the American West. Although he knew British poetics well, he located his explorations in New Mexico and surrounding regions.
Dorn is a fortuneteller. His epic “Gunslinger,” written between 1968 and 1975, opens in Mesilla, where the frontier exists today among Spanish, English, Apache and other Native language-speaking populations. Even the title “Gunslinger” is prophetic, as the current debate continues to highlight guns as essential parts of the American experience.Dorn’s slick hero would be as comfortable on YouTube as on the pages of this book. . . ."
To read the rest of the review:
http://www.kansascity.com/2013/04/04/4161333/four-writers-explore-the-western.html?storylink=twt
Posted by Denise Low at 9:47 PM