Please enjoy the following electronic “broadside” or poetry flyer. You may use it for nonprofit educational purposes; you may not reproduce it for commercial gain. The poem was first printed in Road Apple Review, and I reprinted it in the collection Kansas Poets of William Stafford, with his permission.

Eventually, I will collect these biweekly broadsides into a book, to be published by the Center for Kansas Studies at , in cooperation with Thomas Fox Averill. Until then, you may copy it for educational purposes from this site or download it in pdf form on Greg German’s Kansas Poets site: http://www.kansaspoets.com/

This Ad Astra (To the Stars) Poetry Project is part of my commitment as poet laureate for the state of Kansas 2007-2009. I hope to share my enthusiasm for historic and contemporary poets who resided in for a substantial part of their lives. I appreciate Greg German's support! Many thanks to Steven Hind for sharing the photograph. Finally, my thanks to Jonathan Holden, first poet laureate of , who set the standard. 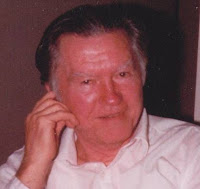 This one gave me chills, and reprinted with permission:

When the sleeper wakes to the daily
autopsy, he feels the weight of his heart
as if it were in his hand, the weight
of a glass of water run cold
from the tap. The morning
breeze subsides, time thickens, trees
filter daylight into a cloudy tea,
as if the sun pulsed and strained
through every vein of every leaf, as if
the waking could weigh this day
as if it were the last, could tell
when the sun stopped beating.

My project as poet laureate is to post electronic "broadsides" or flyers that feature Kansas-related poets. These will be posted here and also at www.kansaspoets.com and the Kansas Arts Commission website. We are working out final details.
Posted by Denise Low at 7:18 PM

My dear friend Judith Roitman reminded me I left out an important resource for the Poetry Publishing Basics post. I quote her here:

This is information I presented to the Kansas Authors Club District 2 meeting last week, and I was asked to post it. Good luck with the publishing/reading/writing/thinking/ego part of po-biz.

I've been an admirer of Stan Banks since we published together in a volume Mid American Trio, a collection of 3 chapbooks by Stan, Greg Field, and myself. Dan Jaffee edited this for BookMark Press. Stan continues to be a leading figure in the KC area and beyond. New Letters on the Air has an excellent interview with him. Angela Elam brings out the best in her subjects. She also does her background research.

I have learned how to listen to these online podcasts and also download them, and what a luxury it is to hear the author and have the opportunity to acquire this interview free until Aug. 15. Treat yourself to this conversation between Stan Banks and Angela Elam. Here is the New Letters description and link:

"Stanley E. Banks’ poetry explores the segregated Kansas City of his youth and some of the difficulties of growing up in his black neighborhood. In this program, he discusses how he overcame racial prejudice to find success in the unlikely arena of poetry. A literary child of the earlier Missouri poet, Langston Hughes, Banks reads from Blue Beat Syncopation

, the collection that captures the first 25 years of his career."

One of my favorite people at WSU, years ago when I did my MFA, was James Lee Burke. His son had been my student when I was teaching at KU, so pere JLB and I had an instant connection. He was a struggling creative writing professor, trying to teach full time, write, and get his novels published!

My thanks to sister Jane, who conducted this interview.
http://bookcriticscircle.blogspot.com/

"Librarian of Congress James H. Billington has announced the appointment of Charles Simic to be the Library’s 15th Poet Laureate Consultant in Poetry.

"Simic will take up his duties in the fall, opening the Library’s annual literary series on Oct. 17 with a reading of his work. He also will be a featured speaker at the Library of Congress National Book Festival in the Poetry pavilion on Saturday, Sept. 29, on the National Mall in Washington, D.C.

"Simic succeeds Donald Hall as Poet Laureate and joins a long line of distinguished poets who have served in the position, including most recently Ted Kooser, Louise Glück, Billy Collins, Stanley Kunitz, Robert Pinsky, Robert Hass and Rita Dove. The laureate generally serves a one- or two-year term.

"On making the appointment, Billington said, "The range of Charles Simic’s imagination is evident in his stunning and unusual imagery. He handles language with the skill of a master craftsman, yet his poems are easily accessible, often meditative and surprising. He has given us a rich body of highly organized poetry with shades of darkness and flashes of ironic humor."

"Simic is the author of 18 books of poetry. He is also an essayist, translator, editor and professor emeritus of creative writing and literature at the University of New Hampshire, where he has taught for 34 years. He won the Pulitzer Prize for Poetry in 1990 for his book of prose poems "The World Doesn't End" (1989). His 1996 collection "Walking the Black Cat" was a finalist for the National Book Award for Poetry. In 2005 he won the Griffin Prize for "Selected Poems: 1963-2003." Simic held a MacArthur Fellowship from 1984 to1989.

"In addition to his memoirs, titled "A Fly in the Soup" (2000), he has written essays; critical reviews; a biography on surrealist sculptor and artist Joseph Cornell, known for his collage boxes; and 13 translations from Eastern European works. Simic’s own works have been widely translated.

"I am especially touched and honored to be selected because I am an immigrant boy who didn’t speak English until I was 15," he said. Simic’s mastery of English has made his work as appealing to the literary community as it is to the general public.

"Simic’s childhood was complicated by the events of World War II. He moved to Paris with his mother when he was 15; a year later, they joined his father in New York and then moved to Oak Park, a suburb of Chicago. Simic was graduated from the same high school as Ernest Hemingway. Like a previous laureate, Ted Kooser, Simic started writing poetry in high school to get the attention of girls, he has said.

"Simic attended the University of Chicago, working nights in an office at the Chicago Sun Times, but was drafted into the U.S. Army in 1961 and served until 1963. He earned his bachelor's degree from New York University in 1966. From 1966 to 1974 he wrote and translated poetry, and he also worked as an editorial assistant for Aperture, a photography magazine. He married fashion designer Helen Dubin in 1964. They have two children.

"Simic will publish a new book of poetry, "That Little Something," in Feb. 2008. His most recent poetry volume is "My Noiseless Entourage" (2005). In reviewing the tome in Booklist, Janet St. John wrote, "Simic's gift is his ability to unite the real with the abstract in poems that lend themselves to numerous interpretations, much like dreams. Whether using the metaphor of a dog for the self, or speaking to sunlight, Simic, original and engaging, keeps us on our toes, guessing, questioning, and looking at the world in a new way."

"In another critique of "My Noiseless Entourage," Benjamin Paloff wrote in the Boston Review that Simic's "predilection for brief, unembellished utterances lends an air of honesty and authority to otherwise perplexing or outrageous scenes."

"Simic’s first collection, "What the Grass Says," (1967) was noted for its surrealist poems. Throughout his career, he has been regarded for his short, clear poems in which the words are distilled and precise. His poem "Stone" often appears in anthologies. It begins "Go inside a stone / That would be my way. / Let somebody else become a dove / Or gnash with a tiger's tooth. / I am happy to be a stone …"

"Among his earlier books, "Jackstraws" (1999) was named a Notable Book of the Year by the New York Times. "Classic Ballroom Dances" won the 1980 di Castagnola Award and the Harriet Monroe Poetry Award, and "Charon’s Cosmology" was a National Book Award for Poetry finalist in 1978. He has also received the Edgar Allan Poe Award, the PEN Translation Prize and awards from the American Academy of Arts and Letters and the National Institute of Arts and Letters. He was elected a Chancellor of the Academy of American Poets in 2000. He has received fellowships from the Guggenheim Foundation and the National Endowment for the Arts."

I just received my new copy of Mikrokosmos, published by Wichita State University's MFA in Creative Writing program, and it is a beautiful production: full-color cover and art; nice paper; great design; and a back pocket that includes a CD of original music. This is a showcase for student and alumni work. Notes indicate this has been published in conjunction with the MFA since 1958--surely one of the oldest continuous literary publications in the country. The program is just a bit younger than the Iowa University program.

The writing is commendable. I was honored to judge the poetry contest, and I can attest to its quality. I published in this blog one of Craig Blais's poems (March 26), and I recommend you look for it! Other works are non-fiction and short stories. Dietrik Vanderhill edited it.

I spent happy months working on my MFA at WSU, so I have a biased viewpoint here. But do look at the line-up of writing faculty: Albert Goldbarth, Margaret Dawe, Jeanine Hathaway, W. Stephen Hathaway, Richard Spilman.

Congratulations on fine work.
Posted by Denise Low at 8:44 AM