Why do so many poets of note come from Topeka? Fellow poet Michael Harty brought to my attention the recent article about Robyn Schiff's new book of poetry and the New Yorker article about it. Then he mentioned her husband Nick Twemlow, filmmaker and poet, is from Topeka. I was not familiar with Twemlow, who now teaches at Coe College in Iowa. He co-edits Canarium Books, a publisher of contemporary poetry in English and translation, and he is a senior editor for The Iowa Review. He is author of Palm Trees (2013), which won the Norma Farber first book award from the Poetry Society of America. Michael, and I discussed Topeka, a city of 123,000, and what water everyone must be drinking. Lawrence, just downriver 20 miles, does not have this kind of record for townies--the University of Kansas, of course, fosters many wonderful poets. Harty, though, has perspective on the Karl Menninger Foundation, where he once worked as a psychologist. When it was at its height, many well known doctors staffed the facility. Their offspring are some of the most gifted poets working today. Harriet Lerner (The Dance of Anger) and Steve Lerner are parents of Ben Lerner.  Other Menninger babies are Kevin Young, Cyrus Console, Thomas Fox Averill (yes, he also writes poetry), and maybe others I am not aware of (please add comments). Many other poets in Topeka do not have direct Menninger connections. Perhaps I need to give credit to Topeka schools and the library, which has always been a bright spot. I'm not sure the state government contributes much, since most of the legislators are transients.
For an article about the amazing number of poets to come out of Topeka,  read "Is Topeka the Most Poetic City in America," by Amy Brady. She has four theories: the contradictory nature of Topkea, political resistance, Menningers, and Esprit de Corps. Whatever the causes--perhaps a synergy of several lay lines--viva Topeka. More Topeka poets are:

Poet Ross Gay described his third collection Catalog of Unabashed Gratitude as a sustained meditation on that which goes away—loved ones, the seasons, the earth as we know it. “This is a book that studies the wisdom of the garden and orchard,” he said, “those places where all—death, sorrow, loss—is converted into what might, with patience, nourish us.” Gay hopes his exploration of gardening and planting will intrigue readers who ordinarily might not reach for a poetry book. . . . and thank you to the man all night long / hosing a mist on his early-bloomed / peach tree so that the hard frost / not waste the crop, the ice / in his beard and the ghosts / lifting from him when the warming sun / told him sleep now; thank you . . . “These poems are shout outs to earth’s abundance: the fruits, blooms, meals, insects, waters, conversations, trees, embraces, and helping hands—the taken-for-granted wonders that make life worth living, even in the face of death,” said Evie Schockley in praise of Gay’s work. “Lyric and narrative, elegy and epithalamion, intoxicated and intoxicating—expansive, but breathlessly uttered, urgent. Ross Gay has much to say to you—yes, dear reader, you—and you definitely want to hear it.” Aimee Nezhukumatathil commented, “Gay offers up a muscled poetry of a thousand surprises, giving us a powerful collection that fireworks even the bleakest nights with ardency and grace. Few contemporary poets risk singing such a singular compassion for the wounded world with this kind of inimitable musicality, intelligence, and intoxicating joy.”
Gay is assistant professor of English at Indiana University and the author of two other poetry collections: Against Which and Bringing   the Shovel Down. His poems have appeared in American Poetry Review, Atlanta Review, Harvard Review, Gulf Coast, and Ploughshares, among other publications. Gay also teaches in the low-residency MFA program at New England College and is a Cave Canem Fellow.

Ross Gay (b. 1974) is the author of two previous collections, Against Which and Bringing the Shovel Down. His poems have appeared in American Poetry Review, Orion, the Sun, and elsewhere.  He is an associate professor of poetry at Indiana University and teaches in Drew University’s low-residency MFA program in poetry. He also serves on the board of the Bloomington Community Orchard.
Posted by Denise Low at 8:10 PM

Maryfrances Wagner, Mammoth Publications author of the collection Dioramas, has published a new

chapbook of monologue poems in the voice of Aunt Mary, an Italian woman with one foot in America and one foot in Italy. Pouf is from Finishing Line Press. Wagner and William Trowbridge, Poet Laureate of Missouri, read together for the Thomas Zvi Wilson Reading series March 15, 6 pm, Johnson County Central Library on 87th St., Overland Park.

The character Aunt Mary is in a nursing home but does not have dementia other than a couple of hours a day she suffers from Sundowers. During those times, she thinks she's at home, in a hotel, a motel or anything on television is in real time and happening to her family. Her niece can become her mother, her son a doctor. The poems are humorous, but there is an underlying current of what it's like to be in a nursing home. This Italian American writer explores identities as they shift among geographies and inner landscapes.

See poems from Dioramas at the We Wanted To Be Writers website.

Maryfrances Wagner has taught creative and academic writing for over twenty years, taught workshops at all levels, served as President of The Writers Place and is currently chair of TWP Programming Committee and board secretary for KC Creates. She is co-editor of I-70 Review and co-edited Whirlybird Anthology of Greater Kansas City Writers. She has published six collections to include Salvatore's Daughter, Red Silk (Thorpe Menn Book Award winner for literary excellence), Light Subtracts Itself (A KC Star Notable book of the year), and Dioramas. She has edited or co-edited three anthologies and also served as co-editor of New Letters Review of Books.
Posted by Denise Low at 9:30 AM 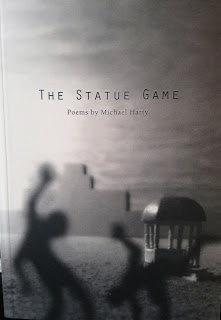 "Jackalope is a collection of short chapters, centered around one such creature and its experiences in a range of western locales, especially bars, saloons and beer joints, of which more in a moment.  I say “its” because it takes two forms: Jack (male) and Jaq (female).  Rumored to be hermaphrodite, our ‘lope prefers the word intersex, because it can switch genders.  Feeling uneasy and threatened in a rough bar, “Her testosterone surges as well as adrenaline, and she begins to shift into masculine mode . . . Jaq feels electrical energy travel from her head to her toes.”

There’s a lot of that electrical energy in these stories: sand storms, solar flares, lightning strikes, the buzz of alcohol, barroom brawls, video games: everyone and everything is wired someway.  Feelings themselves, I suppose, are a form of energy.  The book takes shape in a series of episodes, drawn together by the appearance and re-appearance of Jack/Jaq.  Much energy manifests itself in conversations—tall tales, and jokes (“A jackalope comes into a bar and orders . . . “). "

See more at:
http://www.pennilesspress.co.uk/NRB/jackalope.htm
Posted by Denise Low at 6:38 PM No comments: