KATHLEEN JOHNSON (1959 - )
Dear Poetry Affectionados,
Congratulations to Kathleen Johnson, who has won the only 2009 recognition for a poetry book. from the Kansas Center for the Book in its annual awards, Notable Book List. The Kansas Center for the Book, a state affiliate of the Center for the Book in the Library of Congress, features an annual list of 15 top Kansas books. It is a non-profit, tax-exempt program of the Kansas State Library. For more information, see http://www.kcfb.info/notable/
The KCFB said this about Johnson’s prize-winning book: “A book of poetry so hot it could only be named ‘Burn.’ Kansas poet Kathleen Johnson’s collection ranges from life on the frontier to memories at her parent’s home to tornados.” It is also a very literary book, with rich descriptions and wonderful use of language.
This Woodley Memorial Press (Washburn University) book is available at http://www.washburn.edu/reference/woodley-press/Reviews/burn.htm. It is also available through online book companies. Johnson is also featured in To the Stars, Poets of the Ad Astra Poetry Project ( http://http://www.mammothpublications.com/  ), the publication associated with this series on online poetry publications.
All best,
Denise Low, 2007-2009 Kansas Poet Laureate
++++++++++++++++++++++++++++++++++++++++++ 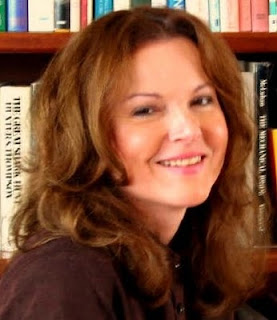 Kathleen Johnson has loved Kansas poetry for decades. This has led her to read widely, pursue an MFA, and also to write reviews of regional and national poets. She wrote insightful, thorough reviews for the Kansas City Star for fifteen years. Now she edits the New Mexico Review in her new home of Santa Fe. Another aspect of her poetic skill set is her background in visual arts, with art history as an undergraduate major.
One of my own delights in poetry is visual images, and Johnson describes colors especially well. In “End of August,” I enjoy the cat’s “sapphire eyes,” but the poet expands the image further to include “sharp points” and “all twilight.” These detail the eyes as faceted, like a jewel, and dark, dark blue, like the evening sky. Other words that evoke colors are moon, sunflower, yellow, bluebirds, goldfinches, and black-eyed susans. This is a good poem for students of poetry to read, because of the use of specifics—the plants are ragweed, candelaria, sunflowers, mulberry, and black-eyed Susans to emphasize season and well as sensual presence. This also illustrates how poets research specificity when writing. Good poets do as much fact checking as journalists. Exactly what birds, animals, and plants herald the end of summer. This is more than fine description and revival of a scene. The last line transforms details into a theme: survival.
End of August
Tonight, while the half-moon hides
its dark side,
the Siamese tom stretches
black velvet paws,
claws splayed toward a dream:
he hunts, sapphire eyes
focused to sharp points,
all twilight
concentrated in his gaze.
Stealthy as a shadow, he curves
Through a creek-bank jungle
Of giant ragweed, candelaria,
sunflower stalks.
Yellow mulberry leaves litter the lawn.
From low branches,
bluebirds dive for insects.
Goldfinches search for seeds
in black-eyed Susans.
Baby cottontails munch in tall grass.
Quick eyes everywhere.
Education: Kathleen Johnson graduated from Olathe High School and attended the University of Kansas for a BFA in Art History (1985) and an MFA in Creative Writing (2008).
Career: Johnson’s first book Burn (Woodley 2009) was a 2009 Kansas Notable Book. As a freelance book critic specializing in poetry, she published more than sixty book reviews in The Kansas City Star (2002-2009). Her New Mexico Poetry Review website is: http://newmexicopoetryreview.com/
_________________________________________________________________________________
©2010 Denise Low AAPP 44 ©2010 “End of August” and photo by Kathleen Johnson
Posted by Denise Low at 8:55 AM 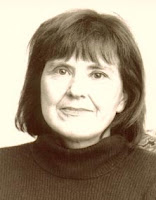 The NBCC just announced this evening that Rae Armantrout's Versed (Wesleyan University Press). She is professor at UC-San Diego

while all the while
the sea breaks
and rolls, painlessly, under.

If we’re not copying it,
we’re lonely.

Is this the knowledge
that demands to be
passed down?

Time is made from swatches
of heaven and hell.

If we’re not killing it,
we’re hungry.