Comments by Denise Low
When I met Michael Poage 20 years ago, I snapped to attention when he mentioned his study with Richard 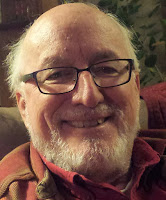 Hugo and Madeleine DeFrees in Montana. Their tandem tenure at the MFA program produced some of my favorite writers, like James Welch, Sandra Alcosser, Kim Barnes, Art Homer and Richard Robbins. Poage has his own voice and technique, well-honed by his training. Gerard Manly Hopkins is an author whose works suggest Poage’s lines. Each poem has an internal working, like a separate clockwork. They are encriptions that intrigue readers to follow intriguing sequences where paradox upsets balance. His early books of poetry are letterpress beauties from Black Stone Press, Handbook of Ornament and Born. Since these early works, he continues to develop his handiwork, with a more global framework. He describes his travels, often for humanitarian and/or literary projects:

“For the past 40-plus years I have continued to write and have given readings and workshops in several states as well as in Mexico, Latvia, and Bosnia & Herzegovina.. . I also participate in progressive social justice activities in the U.S. and abroad.  I was part of the Gaza Freedom March in Cairo in 2009, went to the West Bank in 2010, and traveled to the Gaza Strip with Physicians for Social Responsibility in April, 2012 working as a trauma counselor. . . . I work with the Kansas Coalition Against the Death Penalty, have done community development work in northwest Mexico, taught English and worked with Church World Service in Bosnia.”
Madeline DeFrees endorsed his recent collection The Average Level of Happiness: “These terrifyingly honest poems confront the essential loneliness of the human condition…that of the ghost fish, Miss Kansas, or a suicide bomber.  And, as always the poems are full of surprises generated by the simplest of everyday occurrences such as starting a new address book or forgetting what day of the week it is.”
Here are two sample poems by Michael Poage, reprinted with permission from his Human Ink: The First Five Books 1975-2005 (Wichita: Blue Cedar Press, 2017)

NOT EVEN IN A BLUE MOON 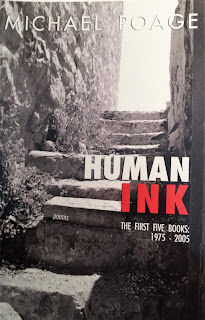 There are continents
looking for a sign
of faithfulness
to the end.
And there is you.
The walk you promised
yourself along the edge
of one land mass
also brings you close
to your voyage.  My
adventure will be to sit
on this front porch
and taste the passion
of the thunderstorm
rolling across the prairie
from the west,
from all we never touched.

THE BLACK SEA
It looked blue to me
but as you all know
I have been wrong
before.  No one I
talked to on the
Turkish coast could
give an explanation
for the name.  It seems
one of those mysteries
we face when we are
the least bit alert
or very lost.  When climbing
out of our painful
selves we often will
attempt a bargain, make
a deal between where
we have been and what
we can’t quite see
ahead.  In this case
trying to bluff is very
dangerous.  None of us
really has what some
call a “poker face.”
We give it dead away.
Just go the way of the
Prophet named Oti
(we think), and this wisdom:
“Poetry is like driving a truck
5,000 miles to a town
worse than yours.”

© 2017 Denise Low,  from a forthcoming collection, How to Write Mood in Verse

Riddles are embedded in the earliest Anglo Saxon oral literatures. Webster’s defines a riddle as: “A mystifying, misleading, or puzzling question posed as a problem to be solved or guessed often as a game” (3rd ed.). Beyond puzzles and questions, a riddle is, according to Edward Hirsch, “both an interrogative and an expressive form, possibly the earliest form of oral literature—a formulation of thought, a mode of association, a metaphor.” Hirsch asserts that riddles are universal contests of wits, from Oedipus Rex to the present. He describes riddles in the Sanskrit texts and the Hebrew Bible. In any case, riddles use double entendres and other circumlocutions to suggest a word or phrase. These can be instructive, but more often they are pure whimsy. They also delight as they instruct.
Wordplay, from nursery rhymes to bawdy limericks, appeals to people’s love of games. A well wrought riddle is in itself a thing of interest, if not beauty. They are verbal versions of the game “charades” and perfect for a long evening’s entertainment.
In the history of British poetics, riddles begin with a set verse form. The mood of whimsy, though, does not limit itself to a single form. Contemporary riddles sustain the love of puzzles and solutions—in many forms.

The bookworm, or moth caterpillar, can consume velum manuscripts, yet the oral tradition of songs and chants, when held in memory, are beyond such destruction. The book reader may also be no wiser after chewing up such a “cwide” or cud.
Here is an example of a bawdy riddle, in the same verse form in the original but lost here. It rivals any limerick, even after all these centuries:

Riddle 45, Exeter Book
I have heard of a something-or-other,
growing in its nook, swelling and rising,
pushing up its covering. Upon that boneless thing
a cocky-minded young woman took a grip with her hands;
with her apron a lord's daughter covered the tumescent thing.

Here are a couple Mother Goose riddles that have simple end rhymes, and they are in modern English. They are still as old as anyone can remember; perhaps the couplets echo the early Anglo-Saxon two-part line:

A Sieve
A riddle, a riddle, as I suppose,
A hundred eyes and never a nose!
A Star
Higher than a house, higher than a tree.
Oh! whatever can that be?

These are simpler than the Exeter riddles, designed to appeal to children. These train the imagination as well as the ear for rhythms of the English language.
Contemporary Riddles
Emily Dickinson writes some of the first serious riddles in U.S. poetry. The riddle form gives this poem a tone of irony rather than gloom:

Under the Grass and the Dirt,
Under the Beetle's Cellar
Under the Clover's Root,

Further than Arm could stretch
Were it Giant long,
Further than Sunshine could
Were the Day Year long,

Further than Guess can gallop
Further than Riddle ride --
Oh for a Disc to the Distance
Between Ourselves and the Dead!

The topic of the poem, the “Dead,” is held back until the end. It is indirect, repetitive descriptions of the unknown with parallel lines, alliterative like some Anglo Saxon verse. The architecture of the poem, then, creates a suspense. Dickinson also injects whimsy into the details, like the “Beetle’s Cellar.” Then the contrast to the last line is most extreme. This is an adult poem that borrows the light verse form and subverts it.

I borrow a child’s riddle form for this long, sectioned poem about “eyes.” Even though the answer is in each section, the uncovering of unexpected places for eyes is the point of the wordplay:

He tells me
“The Devil is real.”

Contemporary riddles work through contrasts, accumulation of details, extended metaphor—all to lead readers to discovery. The Bible has riddle contests, literal battles of the wits (Daniel, Solomon, Samson). Hirsch dates Sanskrit riddles to book 1 of the Rig-Veda (1700–1100 BCE). Riddles are among the oldest poetic forms. They adapt from comic to serious themes; they take shape in myriad patterns.


http://www.swarthmore.edu/Humanities/english/oldenglish/45.html
Posted by Denise Low at 11:35 AM