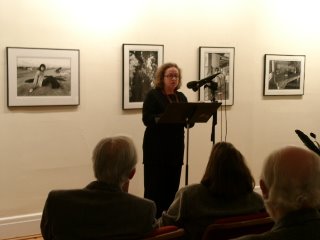 First, I am grateful for the honor of being selected for the next poet laureate of Kansas by the Kansas Arts Commission and Gov. Sibelius. Jonathan Holden is the first Kansas Poet Laureate, and his term runs until July, 2007. He has found wonderful ways to inaugurate this role, including a website, http://www.kansaspoets.com/ , and tel-net discussions of poetry with Kansas poets. More information is at http://arts.state.ks.us/

More information about my books can be found at http://www.mammothpublications.com/ .

To start, I want to post some of my writings in a serialized form for this blog, starting with this first essay from Words of a Prarie Alchemist. The print-text version is available from Steve Semken: http://www.icecubepress.com/

In this essay I try to express how important stories are to responsible connection to the environment. Do let me know what you think.


American Indian people know about survival, and one of their most important tools is literature. The transmission of memorized texts, and sometimes glyphic texts, from one generation to the next sustains cultural identity. One essential strategy of Native storytellers is linking narratives to specific sites. Through stories, Native inhabitants can associate a landscape with moral behavior; history; community identity; and “myth”—the connection between human and spiritual realms. Indigenous Americans continue to preserve literary accounts, and even some languages, after more than five-hundred years of contact with European, African, and other cultures. This success is hard to ignore.

Indigenous American culture groups have distinct categories of literature, including types of narratives. Anthropologist Keith Basso, who works with Western Apache people of Cibque, Arizona, studies their literary genres. He lived with a community family, learned the language, and sustained his dialogue with elders for many years. One of my students at Haskell Indian Nations University was a member of his host family, and she respected his work. Over the years, Basso came to understand that rather than poetry, fiction and drama, of the western European tradition, Apache people first sort language presentations into three types: ordinary talk, prayer, and literature (“narratives”). They further subdivide literature into sacred accounts (“myths”), historic tales, present day sagas, and gossip.

Stories of the second type, about history, always correlate with geography. Basso learned that Western Apache historical accounts further conjoin landmarks with moral lessons: “Historical tales focus on persons who suffer misfortune as the consequence of actions that violate Apache standards for acceptable social behavior.” These tales are linked to places “by an opening and closing line that identifies a place-name where the events in the narrative occurred.” Thus, the places become affixed to the morality tales, in part because of the titles. Landscape is a compendium of teachings....

One such story appears in Diné poet Luci Tapahonso’s works, and in addition to geographical information, it reinforces the “special” knowledge that gives her nation a distinct historic identity. “Just Past Shiprock” connects a New Mexico place to a tragic tale. The title itself is a location, and then the narrator of the poem continues to give more detailed directions:

…there were flat mesas, gentle sandhills, and a few houses scattered at distances. Mary pointed to a mesa as we rounded a curve and asked, “See those rocks at the bottom?” We stopped playing and moved around her to listen. The question was the opening for a story.

What would be a casual remark to most travelers here is a signal to the Diné children to stop and prepare for a story, similar to the Western Apache formula for the opening of a historical tale. The narrator “Mary’s” comment is strong enough to stop a group of noisy children and get their attention. “Mary” then continues to describe the rocks’ color and texture as well as location:
The rocks she pointed at were midway between the ground and the top of the rock pile. The mesa loomed behind, smooth and deep ochre. The rocks were on the shaded side of the mesa.

This much description of geologic formations would not be necessary unless the storyteller expected the listeners to remember the place. Only after the setting is clear does the narrator of the story, tell about a young couple that lost a baby and buried her under the same rocks that the children see from the road. “Mary” finishes the story within the story with a final emphasis on the place: “Those rocks might look like any others, but they’re special.” This sense of “special” is understated here, but it creates an emphasis for the children to remember both location and its human dimension. It emphasizes the site’s role in tribal history.

At the end of Tapahonso’s “Just Past Shiprock,” the narrator refers obliquely to non- Diné people’s dismissal of the desert-like region and concludes “This land that may seem arid and forlorn to the newcomer is full of stories which hold the sprits of the people, those who live here today and those who lived centuries and other worlds ago.” Again, like Western Apache texts, time is fused with a place through the agency of a narrative account. Tapahonso consciously translates a Diné genre of place-stories, about a land “full of stories,” into English. Loss of a child is tragic, so this is a lesson in grief and recovery from grief as well, and the assertion that no life is forgotten. Tapahonso’s story is one example of how use of landmarks creates a memorable historic text....[to be continued]