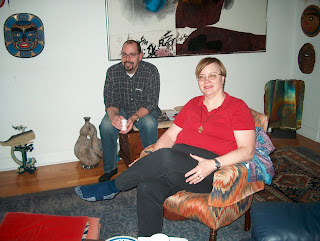 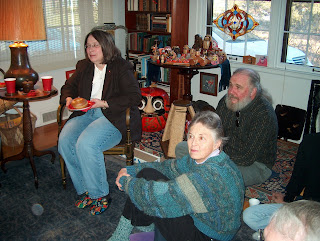 The first photo is Doug Crawford-Parker and Ann Haehl. The second is Jeanie Wilson, Stephen Bunch, and Louie Galloway.

All over the country, groups meet to discuss poetry--both their own and others in the tradition. There is that paradox again: lyric poetry arises in the private, inward moment; yet for the moment to find completion, poets seek listeners, to close the communication circle. We are not content with our own inward monologues.

I have been in a poetry group off and on for 3 decades. One of the first ones was a women's group, with Caryn Mirriam Goldbert, Judith Roitman, Erleen Christensen, Sally McNall, Mary Klayder, Jane Hoskinson, Reva Friedman, and several others. We met regularly for about 5 or 6 years, and I learned a lot. Group dynamics are also part of the experience. Some went on to become serious poets, and a few quit. Most are still writing.

Sunday I met with a Lawrence group organized by Gary Lechliter and meeting at Elizabeth Schultz's house. Thomas Zvi and Jeanie Wilson drove in from Ks. City, as well as Karl Rhoden and Lindsey Bowen-Martin. Brian Daldorph was there, Doug Crawford-Parker, Ann Haehl (and I remember being in a women's group with her in the 1970s!) Stephen Bunch (publisher of TELLUS in the 1980s) and many more. (Forgive me the names I forget here!) Daldorph read from the recend edition of Kansas City Voices and was generous-spirited to also read works by another poet! Haehl read fine, cleanly edited work. The Wilsons recently published their book of alternating poems The Door Into the Dream, described by the Kansas City Star: "A satisfying marriage of image and metaphor from husband-and-wife poets." The Star named it as one of their 100 notable books of 2006.

I tried out an excerpt from the translations I'm working on with Mohamend ElHodiri of work by Egyptian poet Muhamed Afifi Matar. This gave me confidence to keep going with the Walt Whitmanesque form I've chosen rather than ballad-like forms that would capture the music but lose the meanings. An audience really helps!