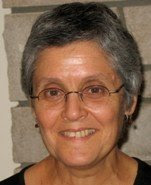 Welcome to autumn, “season of mists and mellow fruitfulness,” and here is a poem about falling leaves, but it is not like Keat’s “Ode to Autumn” nor anything else. Judith Roitman writes about the passage of time, a traditional end-of-year concern, but she is an original. She experiments with how language can mirror consciousness. Images appear, and also fragments of thoughts, but this very American poetic form of experimental verse does not connect dots in expected ways.


++++++++++++++++++++++++++++++++++++++++++++++
Judith Roitman has lived in Lawrence since 1978. Besides being active as a poet, she is professor of mathematics at the University of Kansas. She is Guiding Teacher at the Southwind Zen Center and an active member of the Jewish community in Lawrence. These multiple roles inform her writing. In addition, she is a voice among poets like Ron Silliman who comment on contemporary experience of poetics (http://ronsilliman.blogspot.com/). Clarity of vision is a hallmark of her writing, but the logic is unreliable, as chaos theory shows how random events are the rule, not the exception.
“As a Leaf” is a poem about the motion of falling leaves, perhaps set in the autumn season. Here, focus is on each image as it occurs, and not the expected connections among them. Readers must fill in stories, if there are any. This poem is also about perception itself, as real images are copied on our retinas (“Copy to copy”) and “transformed” into human experience. I also find this poem to be about poetry itself, which is like “turning the wrong corner” and finding new ways to perceive reality. A lyrical image is “suspended wasp motion” as time itself continues to move forward like heartbeats and like the slow, floating wasp’s flight. The ending thought, about the tension between immobility and action, resolves with the “& so on” of continuing creation as our galaxy continues to spread outward across the blue sky. This kind of poetry asks the reader to participate fully.

things ready to fall
& others spinning up suspended wasp motion

within derelict acts & clarity of motion
stillness within motion & so on.