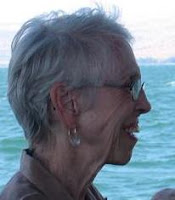 Elizabeth Schultz, of Lawrence, combines enthusiasm for art and nature in her writings. As a literature professor at the University of Kansas, she encouraged thousands of students to examine stories closely and then to link observation with reflection. She brings that sense of joyful scrutiny to her creative writings, which include essays and poetry. Often she lings these to nature. Since retirement in 2001, she has continued to be active as a Fulbright scholar, poet, and ecocritic activist. She is a member of the Committee on Imagination & Place and consultant to its press; she also writes for the Nature Conservancy and other organizations.
Schultz delights in patterns, whether crafted by natural processes or artisans. She engages deeply with both, as seen in this poem. A great blue heron’s carcass has an unexpectedly beautiful form. The poet compares it to a macramé dream catcher; crochet-work; an amulet; and also its vertebrae are frets of a guitar. As insects scour its bones, the this erasure creates yet another pattern. And so the poet humanizes an emblem of mortality—the skeleton. The most descriptive words and phrases of the poem are set like gems along strands of short lines, so that “dark amulet,” “polished blade,” and “shining insects,” along with other terms, resound fully.
The poem shows paradox in uncovering aesthetic joy in river refuse. The title is also paradoxical: how does this mostly decayed beast, lodged on a sandbar, tell about the Kansas River? Forces of the river that sustained the living bird cause the final dissolution.


On a sandbar
a heron is laid
out with care.
A dream catcher,
its design is
pressed into sand.
Its wings stretch
in skeletal symmetry.
Feathers crochet
its light bones.
Its feet curl into
dark amulets,
and its beak is
a polished blade.
Scarabs bead
its intricate fretwork.
Relentlessly,
remorselessly,
the shining insects
devour the design,
releasing the bird
into a river of light.