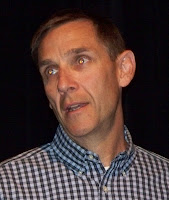 Anna Wiese and John Rosecrance, friends of Robert Dana,  were among those who shared poems and memories with a filled auditorium at the University of Iowa on 27 March 2010. Wiese read "Elegy for a Hometown," about Dana's recent visit to his Massachusetts hometown after many decades. John Rosecrance, who swam daily with Dana for years, recalls his conversations with Dana. He also read "Selling the Earth and Everything on It," about a shared city commission meeting.
After the memorial reading, on March 28, services were held at Cornell College, with music, readings, and words of remembrance by Leslie H. Garner (Cornell College preseident), Tom Lynner, Dan Kellams, Eric Houts, Ben Miller, Hugh Lifson, Jan Sellen McGrane, Don Morrill, Lori Dana, and Rick Campbell.
Robert Dana was poet laureate of Iowa (2004-2008) and the recipient of NEA fellowships and the Delmore Schwartz Memorial Award from New York University. He was one of the first graduates from the University of Iowa Writer's Workshop. He was a veteran of World War II. He revived and edited the North American Review, and he published two dozen books of poetry and prose. As a teacher, poet, and conniseur of good living, he inspired friends in Iowa, Florida, South Carolina, and all the Associated Writers and Writing Program conferences he attended.
His devotion to his wife Peg was one of the first comments I heard about him, and he celebrated this partnership as long as I knew him. He is survived by three children. A beautiful gray cat ("eleven pounds of smoke"), along with the rest of his family and spirit, remain in many poems.
Publication information about Dana's New & Selected Poems is available at the anhinga press website. Photos in this series are by Denise Low, except the photo of Denise Low by Kathryn Kysar.
Posted by Denise Low at 12:14 PM