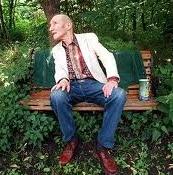 ﻿ New York Times critic Stephen Holden gives a two-page review of this independent film, ending with comments about Burroughs's time in Lawrence: "Late in life Burroughs softened somewhat, recalls James Grauerholz, his companion and executor of his estate. They moved to Lawrence, Kan., where Burroughs, an avid gun fetishist, took up visual art and produced 'shotgun paintings,' made by shooting a can of spray paint placed in front of a plywood board." The film opens Nov. 17 at the IFC in NYC. (Holden, by the way, is the twin brother of Kansas 1st poet laureate Jonathan Holden.)
The review gives highlights of the interviews with Ginsberg, John Waters, Patti Smith, and other famous friends, but when you see the movie itself, the footage is amazing. Tom Pescio and Wayne Propst are two Lawrence friends of Burroughs who recorded his shooting trips, his friendly meals, and visits from personages who stopped by the house on Learnard St.
Congratulations to Yony Leyser, the filmmaker, who started this project when he was a journalism student at the University of Kansas. Holden says of Leyser's film that "While burnishing the Burroughs mystique, 'A Man Within' assiduously tries to humanize an author whom it is all too easy to view as an avenging nihilist, a black hole of icy misanthropic contempt." Those who knew Burroughs later in life saw a softer man than this, with genuine sensitivity to others, especially his cats. He enjoyed conversation and had a brilliant intellect.
My husband Tom Weso and I attended a fund-raising early viewing of a first cut in Chicago, where it was evident Yony had support of the narrator, Peter Weller and many others. Yony has persevered, and the film is opening across the country this fall. It plays in Lawrence Dec. 4 at Liberty Hall. Other screenings are:
25-Nov Los Angeles, CA Downtown Independent