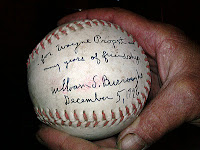 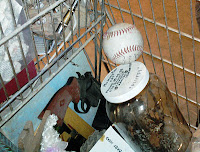 Wayne Propst, erstwhile companion and employee of William S. Burroughs, displayed his autographed softball Oct. 28, 2011, at an art event in Lawrence, Kansas. The old man, according to Propst, thought this was a baseball--he was not much of an aficionado of the sport. This is really a softball, inscribed: "for Wayne Propst and many years of friendship William S. Burroughs December 5, 1996." Wayne says it is the only baseball Burroughs ever signed, and it would fetch thousands at auction. Wayne had other fine art and collectible objects in his shopping cart (which he bought at the junk yard for $3): a turkey baster/artificial inseminator; shoes left over from one of his Shoe Flings; plastic gun, mounted; samples of his plastic baby head art; "Fluffy," a mummified cat; a severed golf iron--about a 3, I'd say. The portability of his display helps him cover all of downtown Lawrence art events with ease. He also uses the cart to carry tools at Lou's Farm, his land north of Lawrence, where Burroughs often visited. I remember parties there when Burroughs, then frail, was helped through the yard by James Grauerholz, Pat Elliott, David Ohle, and other companions. No one ever played baseball at these events. I remember McCormick's vodka was involved. Photos here show interest from an art consumer plus the milieu of Hobbs Loft during the Final Fridays Lawrence Art Party. The rhythm & blues band was very tasty. Unfortunately, too many arts fans are also baseball fans and spent the evening watching St. Louis Cardinals win the final game of the world series, rather than bidding on the Burroughs baseball. Burroughs was born in St. Louis and is buried there--perhaps his ka or spirit had some interest in the series. Probably not. Also, here is the WSB autograph on theWikipedia site, in case you wondered.
Posted by Denise Low at 2:17 PM