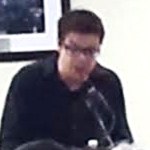 Ben Lerner read Jan. 30 at Washburn University from Leaving the Atocha Station, which has gained recognition from The New Yorker, Wall Street Journal, Kansas City Star,  and many other reviewers. The novel from Coffee House Press centers around a character who is a Charlie Brown-like Language Poet. The self-deprecating humor makes for a good reading, as well as the syntax fandangos. The audience of 80 or so, including his parents, laughed often. Also engaging was the questions-and-answers, beginning with his former high school English teacher who asked him why he chose such long sentences for the narrative.  His answer was, greatly paraphrased: the opening 64-word sentence creates the ruminating pace he wanted for the interior voice of the protagonists. He said he was influenced by friend Cyrus Console's recent book Brief Under Water, written in expanded 19th-century formal prose about popular culture topics. The tension between the two, a clash between form and content, enlivens Console's project. Lerner also talked about the tension between the lone writer (like his hero) who finds identity(ies) within interactions with others, since language is essentially and completely social.Paradoxes abound. He also said he likes listening to his own voice on an answering machine, which processes sound to be like others hear it, and therefore quite Otherly. A poem is like that machine, transforming self into otherness. His novel has an illustration with the caption: "I tried hard to imagine my poem or any poems as machines that could make things happen" (52). Someone asked him  how much of the hero, a poet from Topeka on a fellowship to Spain, IS Ben Lerner. Lerner replied all the furniture in the novel's apartment is real, but the lives of his wife and himself do not take place in that apartment. The character's experiences are quite different. Recursive perspectives, the hero looking down on himself looking up at himself, is one of the mazes Lerner builds. His poem "Rotation," on Poetry Daily's website http://poems.com/poem.php?date=15372 (published in American Poetry Review Jan.Feb. 2012) continues the spirals.
Posted by Denise Low at 8:29 PM