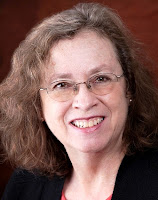 Those of us who attend and occasionally speak at lectures and readings will appreciate this Washington Post columnist's succinct comments about the dreaded monologuer who runs to the microphone after a Personage speaks not to ask a serious question, but rather to vault him/herself into the spotlight with a personal pet theory that most often does not relate to the topic. Kennicott writes: "Suddenly a delightful evening turns into a hostage situation, with angry, garrulous and addled folks in control of the microphone while a roomful of uncomfortable people squirm, look at their shoes and pray that they could silently slip out of the auditorium without seeming rude." Sound familiar? I've seen also many facilitators of Q&As also cut off good discussions in the interest of being fair and getting around to everyone. Most recently, a really qualified person in the audience was placed last in the random democratic crowd and then cut off for lack of time, after many others had nothing to say of interest to anyone outside their own heads. Alas, one cannot control Q&A etiquette, but this is a start. Please everyone, learn to listen, reflect, and then consider your audience. Oops. I believe I have been guilty of poor Q&A behavior on occasion, and I promise to do better! Will you take the pledge with me? Start by reading Kennicott. He's really good.
http://www.washingtonpost.com/lifestyle/style/2012/04/13/gIQAvmceFT_story.html
Posted by Denise Low at 11:28 AM