I heard Kevin Rabas read this poem about what really goes on at writers' conferences--indeed, many conferences. As AWP board member and former conference chair, I have seen the hard work staffs and organizers put into conferences. First-rate programming is the first step, and the second step is to make sure the bartenders are ready for sober and less sober writers who spend long hours congregating. Despite warnings the bar in Chicago ran out of some essential supplies, for example. People who use words for a living love to talk--no surprise. Talk, Drink, Eat. This poem, from Kevin's forthcoming book Sonny Kenner's Red Guitar (Coal City 2013) is about one writer group's expedition out of the conference hotel to find local flavor: 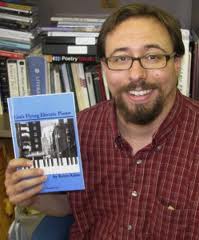 When the Writers Gather and Drive
AWP Austin, for Amy Sage Webb
Amy, a foodie, says she knows about this great place

outside of Austin, and we gather around my car
in the Hilton parking garage, which is lit like a cave.
We can’t get the child’s seat out, and so Amy volunteers
to sit in it. I have on my first pair of roper cowboy boots
since I was 12, and I floor it, unintentionally, and we barrel
out of the Hilton parking garage and into the purple Texas night,
four writers looking for fine food on the outskirts of town,
down and around lots of curves and rises and falls in the road,
Amy, perched like a baby bird, in my toddler’s child seat.
Like a scene from Wonder Boys, movie of writers and their cars;
Grady Trip’s trunk holds a dead dog, a tuba, and a set of suitcases perfectly,
just like in the ad. Although I’m driving, Amy is in the lead, saying,
“Go left here. Now straight through the next two lights. Now right.”
Bart is in the backseat with Amy, and he says, “There are almost no
families with siblings who are writers. The Bronte Sisters,
the Brothers Grimm, they are the exceptions. We’re alone
in our families.” “But we’re all brothers and sisters here,” someone says,
and Jeffrey tilts his ballcap back, and I step a little harder on the pedal,
and we scale a series of small curves. Like a rollercoaster climbing, we make our way
up the mountain and to the restaurant that looks like a cabin from the outside.
Inside, it’s finer than the Ritz, and we take shots in the entrance,
using my disposable camera, pulled from a pocket and snapped into light.
This is the life you never hear of, the once a year gathering of the birds,
of the tribe. There are a bunch of us, say 8000. But we live all over
the country, and there seem to be no two in one town, people who choose paper
over television, legal pad and quick pen script over that email or Facebook
ou’re just dying to write, people who watch and write down what
the neighbors do and do not do, who record the town, in secret, for about 35K a year,
and sink into ecstasy when a small press picks up what they have written
and prints it, and it stays in print, in a few libraries and in the homes of friends,
decades after the writer passes, a record, a sketch of that time, traced and retraced
until it almost takes on paint, the way revision works. Someone spent a lifetime
writing and rewriting a moment, a scene depicting your life, and that someone
is speeding down curves, in a loaded car, full of wine and fine food, the best meal
they may ever have had, and that is the way of it, once a year, when the writers gather,
Webb in the coxswain spot, giving directions, as the car sways and rumbles, writes
its way into the oncoming night.
Kevin Rabas co-directs the creative writing program at Emporia State University and is co-editor of Flint Hills Review. He has two books of poetry, Bird’s Horn and Other Poems (Coal City Review Press) and Lisa’s Flying Electric Piano (Woodley Press), a Kansas Notable Book and Nelson Poetry Book Award Winner. He is a winner of the Langston Hughes award for poetry. "When the Writers Gather and Drive" reprinted with permission of the author. It was first published in Blue Island Review.
Posted by Denise Low at 10:16 AM