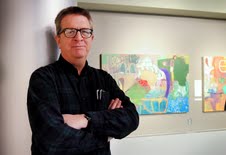 
Richard Robbins grew up in Southern California and Montana. He studied with Richard Hugo and Madeline DeFrees at the University of Montana, where he earned his MFA. He has published five books of poems, most recently Radioactive City and Other Americas. He has received awards from The Loft, the Minnesota State Arts Board, the National Endowment for the Arts, and the Poetry Society of America. He directs the creative writing program and Good Thunder Reading Series at Minnesota State University, Mankato. He is vice president of the Associated Writers and Writing Programs national board.


Piper Abernathy is a poet and educator. She has a M.Ed. in Literacy from Rockhurst University and a MFA in Poetry from UMKC, and she taught high school locally for nine years. Piper is currently a regional coordinator for Poetry Out Loud and an adjunct instructor for Penn Valley. Her poetry can be found in Pleiades, Mid-American Review, Memorious, and the I-70 Review.


Denise (Dotson) Low is former Kansas Poet Laureate, with 20 published books of poetry, personal essays, and scholarship. She is a member of the national board of the Associated Writers & Writing Programs and was immediate past president. For 25 years she taught at Haskell Indian Nations University, and she has been visiting professor at the University of Kansas and University of Richmond. Currently she teaches courses for Baker University. She has awards from the NEH, the Lannan Foundation, The Newberry Library, the Academy of American Poets, and the Kansas Arts Commission. Her academic books include prose about Native and settler literatures of the middle plains region. She is on the national board of AWP as past president.
++++++++++++++++++++++

This is the first reading by Minnesota poet Richard Robbins in this area. Here’s a poem by him and more information. He is an original voice, with exquisite craft.


The other one has tried to reach it
across the ocean of the shoulder,
tried to stop it from hitting, from sending
a man to death with a scribbled word.

The body wishes it would listen
more to the body, refuse for once
this urge to travel an alley without
eye, tongue, or the two versatile feet.

The heart, tomorrow, will have her way
with it. Like the bones of the rib cage,
so birds of the air. The river will turn
in its path, the blue ground angle up,

every millionth part of God conspire
to bring the right to answer for itself,
for all the hands that closed or waved away
the weak untouchable things, come now

to throne, to town, his own driveway on
their knees to be healed.


Richard Robbins is director of the  Good Thunder Reading Series and Univ. of Minn.-Mankato  M.F.A. Program in Creative Writing. His publications include: