Review by Denise Low  ©2013 Denise Low. Contact for reprint permissions kansaspoetry[at]gmail.com
In The Book of Big Dog Town: Poems and Stories from Aztalan and Around, Jim Stevens explains visionary states as he experiences the 11th century site of Aztalan in Wisconsin:
One day I decided I wanted to go across the Crawfish River, to the sacred site on the bluff. After some time in the glacial kettle there, playing a song on my flute, I was walking back toward the river. The wind, tailing me, began replaying my song. All of these things were for me a new way of experiencing the world.   (4)


The ancient city of mounds, where songs take on their own lives, mirrors the arrangements of stars. The poet refers to three earthworks mounds that echo the points of Orion the Hunter’s belt in “The Hills and the Three Stars.” With this book of prose and poetry, Stevens completes earth and sky alignments with a third element—the human voice. This is an important book, one that uses language to unify the 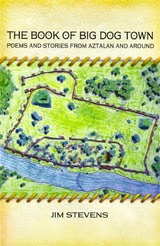 seen and the unseen. His words creates new experiences in the fourth dimension of the readers' minds.


Stevens writes foremost about place. The poems and stories reflect on Aztalan and its surroundings. The poet understands the intangible pull of sites beyond measurable grids of magnetism. “Wind and Country” begins: “Above the river and east of the town / He is hearing closely the way of the wind.” This poem continues to look more deeply into the geography, as he finds, “The path here is named Keeping Us Whole / Where spirit hills are calling to the stars.” Indeed, the narrator of this transcendent experience  explains how a song “opened up the doorway between worlds.” Earth is not a separate element from the heavens.


The poet uses an easy, loping cadence in his writings. His dance of words keeps the beat, embellished with spins and dips along the way. The language is unpretentious and conversational—until Stevens unfurls a fancy metaphor, like “It is a far place where only the yellow bird goes / Carries him into this world on a spine of flowering wings.” The simple “yellow bird” becomes both a winged being and a blossom.

Most of all, Stevens is a guide to spiritual history of North America. His experience of family Seneca traditions adds to the dimensions of the book. He also draws on European American sources like Clayton Eshleman to explain, “’as one sees into a shifting field, there is a desire to see through it’" (Juniper Fuse).  His stories reveal how Aztalan is similar to Cahokia, a large mound city outside St. Louis. This book resonates with Alice Azure’s similar renewal of Cahokia, Games of Transformation (Albatross Press, 2011). Both books challenge the erasure of human experience before European settlement of the Americas. The Book of Big Dog Town also connects Aztalan’s earthen pyramids to related Mexican and Central American sites, where stars also mirror the arrangements of people’s dwellings. Stevens references Younger Brother Obsidian, a Mayan Daykeeper of the 9th century: “And here is my friend the stealer of time / With his father rain all that is left in the words / “With his rivulet-faced aunts who wait ? Among sparkling tinges of broken glass / For the sake of Younger Brother Obsidian . . . .” A Seneca longhouse is not distant from the continuity of Guatemalan waterways, winds, birds, and trees: “And there comes the hermit thrush of the clouds / Stately in her deep grieving resolve / Just when the soul-tree is in its proper longhouse / And the cedar wind is rattling the walls / So tightly bound until the light shines through.” Light shines through this entire book as Stevens illustrates how history is an ongoing legacy, not lost on a static timeline.
THE BOOK OF BIG DOG TOWN: POEMS AND STORIES FROM AZTALAN AND AROUND. Fireweed Press (Madison, Wisconsin) 2013. 64 pages. $15.00