JACKALOPE WALKS INTO A COLORADO BILLBOARD by Denise Low 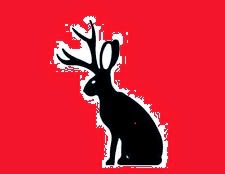 Jaq leans up against the “Ride a Jackalope to Trinidad” billboard and soaks in the warm sun. Wind whistles under the frame, but this is mostly a sheltered spot. She slides into the grass and dozes.


When she rouses, no telling how long she has slept. She looks across the scrubby junipers toward Raton Pass. This is the Santa Fe Trail, and before that it was a game trail, although history books will credit only human species, and then only Europeans.


What rough country. Old volcano cones dot across the horizon like chess pieces on a disorganized checkerboard. Other ridges flow rhythmically into tilted edges of mountains. A few stone wall ruins remain, perhaps Pueblo, and the arch of an abandoned Spanish church. Farther upstream, a Raven circles.


In the valley she notices movement, then sees smooth leaps of two antelopes, their ebony-black pronghorns well defined against pale grass. Good to know the ‘lopes still own part of the homeland.


Back by the highway, a white cross rises above an informal shrine of tinsel roses. Here someone died in a car accident, a reminder of time passing, as much as the extinct volcanoes. A fading photograph of a young man’s face, framed in white wood, stares West into eternity.


Jaq looks behind her at the garish billboard poster. “We Never Sleep!” says a grinning cartoon wolf. “Stay the Night.” The Jackalope next to the Wolf wears a saddle, and it walks down the highway, one foot raised.


Jaq looks back at the subdued greens of the winter foothills. The raven tilts and starts a new spiral against clouds. In a blink, it all could return to primal void. Or not.


Jaq smells the piny mountain scent one last time. She stands up against the saddled Jackalope image, and it is exactly her size. She stretches to fit the silhouette. She raises her foot to mirror the poster and tweaks her left ear to fit. It is when she matches the two-dimensional Jackalope’s grin that she suddenly loses consciousness.