Dear Friends / Family,
Thank you for good wishes during the trying time of evacuation from our home during the Kincade 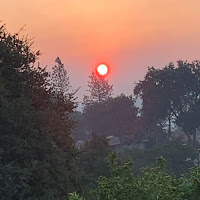 Fire, Oct. 26-Oct. 31.  A small fire in the Fitch Mountain neighborhood in August helped us to mentally prepare for a mandatory evacuation. We saw the local firefighters in action and how they were quick, had effective defenses, and worked with helicopters that carry water bins; jets that spew retardant; and impressive fire trucks. New to firefighting in this region is use of motion camera surveillance on mountain peaks. Also new is the meteorologists’ experience of what these Santa Ana-like winds can do in Northern, not just Southern, California. The fire crews were alert and arrived quickly.

So, when the bleepingly intrusive alarm of the Kincade Fire came over our phones Saturday noon, Tom and I were somewhat prepared. We had our legal papers together in a portable file box. We had a go-bag of food. We had gas in the cars, water, and some cash. But we were still overwhelmed when we got a 3-hour notice that we should evacuate. The fire was 5 miles away with strong winds blowing toward us. We unplugged appliances, found our overnight bags, and charged our phones. We then had time to select a second tier of possessions to pack—finer clothes, family photographs, jewelry, mementos, a few books and paintings, and the Sabatier knives my brother gave me in 1972. Wine. I packed a case or so of my winemaker son’s wine from the basement, for barter and for solace. 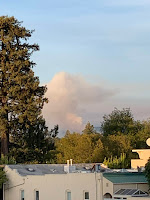 last July. The resonance added to the surreal quality of the day. Our home was dissolving under us, again.

We found someone willing to take us in—our daughter-in-law Allison’s mother Tami lives in Santa Rosa 15 miles away. We started the drive through back roads to Tami’s house, and luckily, Tom found a gas station and topped off the tank. At Tami’s we shared burgers from a local joint and some of the wine. All seemed normal, except for the layer of smoke to the north. At nightfall, Tami and her friend decided to leave for another city, while we stayed and went to sleep. We thought we were set.

We did not really understand the likelihood of a progression from an evacuation warning to a mandatory evacuation. Nor did we understand where we were on the map in this new town and how close we were to the fire. At 4 a.m. the phones made the wretched alarm again, and a neighbor pounded on the door and told us to evacuate. He affirmed that we were in the projected path of the fire.

We were loaded and on the road fifteen minutes later. We headed out the driveway with no clear plan 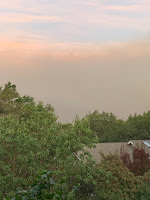 of where to go—north to friends in Ashland, Oregon, who would not be awake, or south to be with relatives? Our son was in Petaluma with his in-laws, and he texted that address, so we decided to join him. We edged onto Highway 101 and joined the stream of trucks, motorcycles, cars, and emergency vehicles. This was the scariest part of the entire experience. A few drivers were panicky and trying to weave in and out of the moving wall of cars crammed together. Ambulances were in the median shoulders because no one would give them room. Nightmarish. Going south was the right choice, because we found out later that Ashland  was only accessible from the south—101 North closed within minutes.

Two hours later, we turned off 101 onto dark country roads near Petaluma and managed to find Uncle Bob and Aunt Elaine’s ranch, thanks to Siri the Omniscient. At 6 am they had coffee ready, good pour-over coffee. That meant a lot. Then they cooked us a seriously good breakfast. Our son David advised us, and we mapped directions to Oregon, where former Lawrence friends Jim Gilkeson and Diane Tegtmeier live. They had been displaced by the Valley Fire four years ago. They would understand.

We made it as far as Redding that day, where we spent a tense night in a motel. In the morning, we watched television news of the fire, miniaturized on the tube into brief, dramatic clips. This odd echo of our experience, distorted, added a sense of unreality.

Then we traveled to Ashland, by way of Mount Shasta. We stopped and appreciated this white-topped 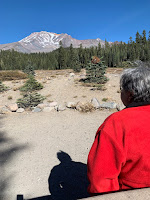 eminence. Out of the fire zone, such touristy normalcy was eerie.

By the time we reached Ashland and found our temporary abode, I was snappish. I was disconnected from my surroundings and did not register the beautiful colors of an Oregon autumn. Our patient friends served a lovely dinner, and we contributed wine. Food and drink and talk worked their magic. Jim and Diane conducted informal therapy with us for the duration—listening, comparing stories, sharing outcomes. They introduced another survivor of the Valley Fire, and I listened as she told her story. We were becoming part of a new fellowship in the evolving pattern of days.

On the 3rd day came the rescinding of the evacuation order. The narrative that we had been living 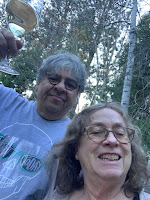 would move toward a “happy” ending, unlike that of our friends, whose workplace had burned to the ground. Survivor’s guilt is real, but I did not expect a rush of satisfaction for getting through the difficulties.

We made the long drive home on Halloween, expecting power outages but happy to have an intact house. When we reached Healdsburg, we saw burned hills directly above our son David and his wife Allison’s house. Everything was okay, but oh so close to the upturned Tower of the Tarot deck. Out our back yard, we could see pink fire retardant on hills across from us and a burned patch. Light ash covered the rose leaves.

And that should have been the jubilant ending. But the gas was still out. Still is out. At first, this is not such a problem. The microwave, a single space heater, the refrigerator, even the washer and dryer work. The coffee pot works. But the stove does not, nor the hot water heater. This is too many days without a shower and a week without a shampoo. Nights are very cold.

So, we are still between worlds, in a suspended time. We can’t leave the house unattended from 8 am 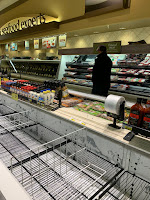 to 10 pm because the power company might appear. The day revolves around this fact. Grocery stores are slowly repopulating their shelves. There is a shortage of mayonnaise. When refrigerators don’t work, everyone throws out the mayonnaise, so remember to keep an emergency supply. The meat department only had veal and rack of lamb at first, but very little ground beef or other middle-class cuts. Ice cream is a distant dream.

We are having unpleasant emotions about Pacific Gas & Electric, which turned off our gas well after the major threat of fire. Our insurance company emailed and offered to spray our house with fire retardant gel 6 hours before we were cleared to return. We declined. After collecting and totaling receipts, I found our expenses were $50 less than the deductible. Some things never change.

The power outages and evacuations are all worth it for one outcome—no fatalities. We will contribute to the relief effort for Sonoma County evacuees who are less fortunate (our church is taking a collection for undocumented workers), and we will count our blessings. For now, we are trying to adjust to a new understanding of our environment and new identities, for we do identify with our surroundings. The water, air, and local foods circulate in our bodies. The burned scar on the slope opposite us is a reminder of this time of fragility when our houses and bone-house bodies were in balance.

After a few weeks, we will have a family meeting, Tom and I, and maybe a few of the turkey vultures 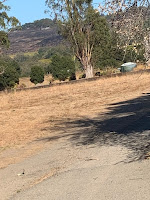 that circle our house regularly. We definitely will make some improvements on our emergency strategies. Until then, we wait for our town and our region to return to regular, forgettable routines.

We truly appreciate each of you and your kind words of support. This is my first national disaster, so I have been fortunate to live this long without a tornado or other catastrophe—just those of my own making. The gas company might come tomorrow, and Tami has offered her house for a hot shower. Life in this interstitial space is, well, goodish.

Best to all, Denise

PS, we just had the gas turned on. End of the evacuation saga, part I.