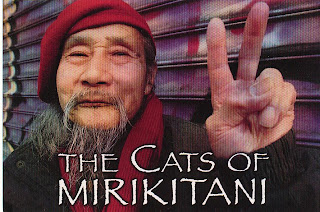 Roger Shimomura is a long-time resident of Lawrence, and I remember one of his first art shows in the University of Kansas Spooner Museum, about 1968. The majority of his work concerns Japanese American experience, especially Japanese American internment camps of World War II. He was a child then, and he also draws on his grandmother's diary of that time. He now is distinguished faculty emeritus from the KU art department. The Smithsonian archives his papers, and he has had shows and performance-art pieces all over the country. He and his artist wife Janet Davidson-Hues have an apartment in New York City, where he met the subject of this award-winning documentary, Jimmy Mirikitani.

Like Shimomura, Mirikitani is a survivor of the internment camps, when Japanese Americans were uprooted by the U.S. government and held in prison camps 1942-1944. They lost homes, farms, and other assets; the majority of this 110,000 group were U.S. citizens, including Mirikitani and Shimomura. (http://en.wikipedia.org/wiki/Japanese_American_internment). Mirikitani also lost all his Japanese relatives in Hiroshima.

Shimomura found Mirikitani's artwork on E-Bay by coincidence, before 9/11/2001. By coincidence, the homeless artist's street "gallery" was near Shimomura's apartment and near the twin towers. Shimomura saw the street artist whenever he was in the city. Also, a film editor, Linda Hattendorf, began filming Mirikitani's life for a documentary.

This film became The Cats of Mirikitani. The opening scenes are beautifully put together and moving--a polished documentary. And then the destruction of the twin towers, eerily captured here, shifts the story into acute political commentary. Parallels between the explosions of Hiroshima and of the towers frame the rest of the images. Mirikitani's barely contained anger and grief over his own internment and war losses increase the film's voltage as well.

The real star, however, is Mirikitani's artwork. It is lush, bright, detailed, and skilled. His landscapes of the Tule Lake internment camp are geographically accurate and horribly beautiful; the drawings also reach vectors into psychological landscapes. The artist draws cats in memory of a child who died in the camps.

The camera shows Mirikitani working 12 and 14 hours a day on his drawings and paintings, so the variety of his images--portraits, flower-and-bird paintings, street scenes--accumulates a stunning visual impact. This is a painterly documentary with emotional power.

My husband Thomas Pecore Weso says Hattendorf creates a happy ending for the film. Indeed, it is very moving to see the healing that occurs as the filmmaker gives Mirikitani shelter from the poisonous aftermath of the twin towers. The two become domestic partners in her tiny studio apartment. She finds social services for him at a retirement home. There he teaches drawing and eventually takes up residency. He meets with an estranged sister, and he attends a reunion at Tule. The camera documents this narrative progression. And as Mirikitani's inner pain unfolds, the role of artmaking as his expression for all these years takes on greater significance.

Mirikitani's life, in his 80s, has improved. He had a one-man show at the Wing Luke Asian Museum in Seattle, summer 2006, and he attended the premiere of this documentary at the Tribeca Film Festival, where it won the Audience Award. (http://seattletimes.nwsource.com/html/artsentertainment/2003120337_jimmy12.html). Yet Mirikitani's internment camp years and aftermath and the horror of Hiroshima cannot be dismissed. The impact of the twin tower attacks cannot be dismissed.

The U.S. government modeled Japanese internment camps on 19th century American Indian reservation life--despite the constitution that guarantees life, liberty, and the pursuit of happiness. This film will make it less easy to dismiss these U.S. historic policies.

For further information: http://www.thecatsofmirikitani.com/
Posted by Denise Low at 8:24 AM