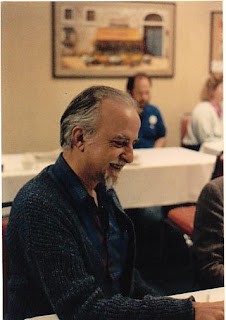 Here is a poem by Michael Paul Novak from A Story to Tell (Kansas City: BookMark Press, 1990; I remember editor Dan Jaffe's pride when he published this book).

The clear bell of the trumpet
Is a recording, but the cannon shot
That follows is real as death.
It rings in my ears as I keep

Moving in a world at attention.
The saluted flag tumbles
Majestically down as if it were
A symbol, something significant.

In the disciplinary barracks
The prisoners' day is not done.
The sun shines in their cells,
An insult to order.

I'm driving out, observing
The speed limit, like a believer
And hearing for miles and miles
The silence of guns.

I went to Leavenworth last night for the informal service for this fine poet, born July 6, 1935 and died Dec. 2, 2006. Almost everyone spoke about their connections to Novak. His daughter told how her dad had kept his feelings private, so she expressed to several members of the group how much they had meant to him and how he spoke of them to her. One was a "best friend." One was singled out as "ethical." She used more details, and those who knew the individuals enjoyed the disclosure.

I remembered his role in the community of Kansas poets and writers. He was an active member of the Kansas Writers Association, which was composed of writers from college creative writing programs across the state and professional writers. It was a state-level organization modeled after the national Association Writing Programs www.awpwriter.org. He was always funny, darkly so, and greatly intelligent. This photograph comes from that conference. I will miss his spark.