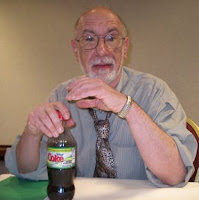 
For more than twenty years, Albert Goldbarth has taught in Wichita State University’s MFA creative writing program. During that time he has won major prizes for his poetry and essays. Goldbarth is originally from Chicago, and he has not lost the urbanity of that place. He also brings a profound depth of language experience to his work. He studies cultural and historic texts and alludes to them freely. Intellectual thirst is a striking aspect of his writing—and another is his extensive vocabulary.

Goldbarth’s longevity in the Kansas university system suggests compatibility with his adopted home. What he shares with his fellow Kansans, I believe, is self-deprecating humor. He pokes fun at all sorts of folks, but most especially himself. Second, he voices strong opinions, also like most Kansans. And he has no patience with phoniness. Thus an earnestness underlies the poet’s ironies and occasional sarcasms. Despite a harsh, realistic depiction of details, he affirms the ten-million myriad beings of this flawed world.

Like other Kansans who survive the extreme seasons, both physically and psychologically, Goldbarth is a person of faith. In “Wings” his narrator finds a bird carcass. Rather than describe a headless bird, the speaker conjures the image in human terms, specifically wings of a theatrical stage. But he speaks as though the stagehand were an executioner or deus ex machina. In the next section, the poet does look at the desiccated animal remains, but without poetic metaphor. He accepts “hard summer; the land enameled.” He accepts life disintegrating into dust. Then he finds solace in prayer and love.

I always wondered why they called them wings.
—Perhaps because somebody always waited in shadow
in them, with a rope.
With a rope like a great braided nerve
and while some sweet singing or bloody melee
completely filled the central light, this person
would raise or lower the god.
_____________________________________________
It’s summer. Hard summer; the land enameled.
I find the bird already half-dismantled
by ants—the front half. It’s flying
steadily into the other world, so needs to be this still.
Do I mumble? yes. Do I actually pray? yes.
Yes, but not for the bird. When we love enough
people a bird is a rehearsal.