On e of the good thing about working at a university for a number years is that sometimes you’re lucky enough to meet a great speaker a second time around. So I’m very glad that poet Paul Muldoon is with us again.
In introducing our speaker tonight, I don’t want to make the same mistake as the one made by the university president of Colgate University in Hamilton, New York, a mistake referred to by Paul Muldoon in his marvelous new book of Oxford Lectures about poetry, The End of the Poem. According to Muldoon, the university president insisted on introducing Mr. Yeats to the audience, and did his own research about the poet. Unfortunately, however, he made the mistake of thinking that the speaker was Keats and not Yeats—it’s the difference of one letter after all—and introduced the great Irish poet as Keats, the author of “Ode to a Nightingale” and “Ode to Melancholy.” I hope to do better than that.
Paul is one of the most honored of contemporary writers. He has won the prestigious T.S.Eliot Prize for poetry, and the Pulitzer Prize for his 2002 collection, Moy Sand and Gravel. There have been many other prizes and honors, too many to mention now. As well as his Professorships at Princeton and Oxford, Paul Muldoon is also the new poetry editor of The New Yorker.
I have been reading Paul Muldoon’s poetry for many years, following the course of his prolific career. In reading his early poems, I always appreciated the way that Muldoon could make the political both personal and immediate, and I like in particular his poem “Cuba,” which yokes together very disparate events. In “Cuba” the Cold War confrontation between America and the USSR is the unlikely backdrop for a young girl’s confession. It is typical of Muldoon to see the Big Picture in the small scene, and enable his readers to clearly see it too.
Muldoon’s poetry is in many ways a series of contrasts between, for example, a sort of casual tone and yet tight form; between commonplace events and their great significance; between the new world and the “old country”; between very different events, unexpectedly yoked together. Muldoon himself has said that he wants his poetry to sound “very off-the-cuff,” aiming for “clear, translucent surfaces,” which on closer inspection hold, “other things happening under the surface.”
Muldoon’s most recent book of poems, Horse Latitudes, is another powerful and intriguing collection. First of all, I found myself learning about the significance of the title: “Horse Latitudes are the latitudes close to the equator where ships were often becalmed, and horses were supposedly thrown overboard so they didn’t have to be fed and watered.”
This is a collection of masterful poetic technique and considerable emotional power, the two in perfect combination in “The Old Country,” for example, in which Muldoon describes a country—his old country, perhaps—in which “every resort was a last resort,” “every cut was a cut to the quick,” and “every slope was a slippery slope.” Muldoon evokes an awful sense of impending doom, which reminded me, at least, of Bob Dylan’s John Wesley Harding songs. Perhaps I was thinking of Dylan because there’s a sort of tribute to Dylan in this collection, “Bob Dylan at Princeton, November 2000,” in which Bob picks up his “ornery degree” at Princeton with “absolute refusal to bend the knee.”

“Absolute refusal to bend the knee”: that might be applied to Paul Muldoon too, who has, it seems to me, always gone his own way in his writing, and everyone who loves poetry—and art in general—should be glad of that.

There are many Big moments of Paul’s career that I might mention as a final point, but instead I’d like to mention just one small point, and small poem—a haiku, in fact—which not only shows Paul’s mastery of form and wit, but also shows how much fun it is to read this poet who seems to have an endless supply of surprises in his magician’s hat. In the long haiku sequence “90 Instant Messages to Tom Moore,” Muldoon writes: 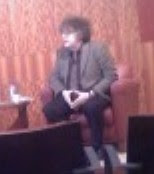 Skirts round their middles,
the girls have a right confab
while taking widdles.