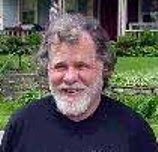 Charlie Plymell was born in Holcomb during the Depression. He has written that his father was an Oklahoma cowboy, and his mother was of “Plains Indian descent.” He participated in the beat movement in Wichita, L.A., San Francisco, and New York. Michael McClure, Bruce Conner, S. Clay Wilson, William Burroughs, Lawrence Ferlinghetti, and others befriended him. He has edited and published Cherry Valley Editions in New York, since 1974. He regularly visits family and friends in Kansas.

Plymell celebrates details of geographic places in many of his poems, whether Paris, Utah, Baltimore, or Nueva York. Like many Kansans, he is an inveterate traveler, and he has some of the best highway poems. “Not a Regular Kansas Sermon” references Kansas culture in several ways: the subsistence living, with pear cactus and jackrabbits making a meal; and a faith that makes psychological survival possible. He has a declamatory style, with the ability to compress stories to their barest, most gleaming bones.

NOT A REGULAR KANSAS SERMON
For my mother in the hospital

Your grandmother married out of
the Trail of Tears.
You were born to a trail of fears,
a soddy, your brother dead.
Now you mistake me for him.

Then came the dust storms.
You put wet wash rags
over our faces so we could breathe.

Many women went mad, “God’s Wrath”
in the storms, miles from anywhere.
It took strength, courage and prayer.
You shot jackrabbits to feed five kids
and even fed hoboes from the tracks.

You gathered cactus for us to eat.
(I saw some at a gourmet market in D.C.)
I’ve yet to see snow ice cream
or mayonnaise & sugar sandwiches.
I did see fry bread recently
at Harbor Place in Baltimore. . . .

Education: Charles Plymell attended North High School in Wichita and Wichita State University without receiving a degree. He received an MA from the faculty of arts and sciences(Johns Hopkins 1970).
Career: Dave Haselwood published Plymell’s first poetry book, Apocalypse Rose (San Francisco, 1966), and Lawrence Ferlinghetti published his novel The Last of the Moccasins (1971). The University of Delaware collections his manuscripts and papers. His other dozen books are listed online at his press:
http://www.cherryvalleyeditions.com/index.html. ________________________________________________
© 2009 Denise Low, AAPP 33 © 2009 Charles Plymell, 2002 Patrick O’Connor, photograph
Posted by Denise Low at 7:11 PM