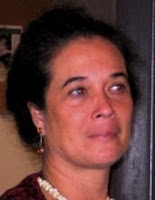 Allison Hearn has been an active member of the poetry scene in Northeast Kansas for the last decade. She brings a traveler’s experience to her writing, as she was born in Trinidad and is descended from Portuguese, Italian, African, British, and Chinese families. Besides her original home in Trinidad, she has lived in London, New York, Toronto, Princeton, and, since 1996, Lawrence. Her formal training is in art and design.

Hearn has written intermittently since she was a girl, she told a Lawrence Journal World reporter (2002), and she relates to the Kansas landscape because of its embodiment of time: "Kansas is the floor of an ancient sea." In her writings, she lives amidst sea stones, family stories, and Victorian houses, which she restores for a living. In “Yearly Restoration,” an Ad Astra Poetry Contest winner, she delights in the names of commercial house paints: “Morning Mist,” “Electric-Pink,” “Evocative Sunlight,” and “”Frosted-Hawthorn.” These are her present-day layerings of experience over an 1850s frame house. So she participates in history, as she heals damage to “kicked-in doors.” This renewal becomes its own shade, “Good-As-New.” The narrator suggests the “frat-boy parties” that recently ended and other stories, but this is a lyrical poem about sealing in the present, as though it could last through all years.