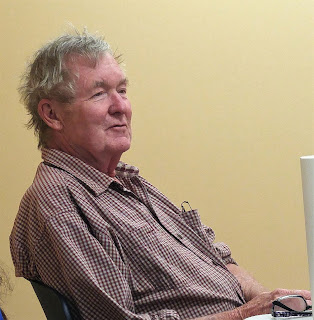 The Salina Public Library sponsored a celebration of Robert Day's seminal novel with a community reading of the book, author visit, dinner, movies, and a panel discussion Sept. 17, 2017, that included Fred Whitehead, Mary O'Connell, Leo Oliva, Robert Day, and myself. Here are my remarks.

I have participated in formal and informal discussion of Robert Day’s Last Cattle Drive— in libraries (the Kansas Humanities Council TALK program), in prisons, in coffee shops, and around kitchen tables. I have lived with the book almost from its first publication. Ed Ruhe, the legendary Kansas University professor, introduced me to Day, Fred Whitehead, and Ward Sullivan—the model for Spangler—when I was in graduate school.
I remember Ruhe’s dining room table piled with books, with only small spaces left for plates. The cast was like a novel’s playbill. I remember being mesmerized as Robert Day shook my hand before dinner and then announced I was just a few handshakes away from Tolstoy. He recounted the lineage back to Nabokov, and then Tolstoy. It was magic.
Then Bob did what he does best, after a few magic tricks. He told stories into the night. I was enchanted. I read The Last Cattle Drive at that time.
I grew up in Emporia at the edge of the Flint Hills, cattle country. My relatives were involved in 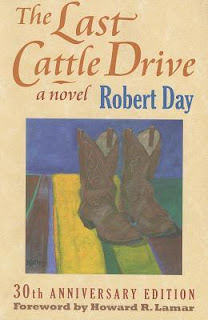 ranching, and many neighbors. I went to the sales barn on Friday nights to watch auctions of livestock. I rode horses with friends. I enjoyed the half-tamed, unfenced yards that edged into “vacant lots” and back. I was no expert on details of ranching, but I knew the characters and general setting. Opal was my mother. Jed was either of my grandfathers. Spangler resembled a composite of crusty old fellas I lived around, including, say, William Lindsay White (son of William Allen) and my music teacher Professor Leopold Liegl. At KU, I knew the type of tenderfoot Leo represents. How I relished this book, about my world and not John Updike’s or J.D. Salinger’s world of upper-class New England angst.

The Last Cattle Drive is one of the few mainstream-published books that shows sentient beings in grasslands cattle country, in 1977. Just a handful of names are in this category, Willa Cather’s My Antonia was 1918, then there is a gap until William Stafford’s National Book Award-winning Traveling through the Dark, poems, in 1963. Wright Morris published Plains Song in 1980. Larry McMurtry’s Lonesome Dove series was 1985.Cormac McCarthy’s All the Pretty Horses was 1992, Kent Haruf’s Plainsong was 1999, and in 2002, Annie Proulx published That Old Ace in the Hole. In film, Urban Cowboy appeared in 1980 and City Slickers in 1991—and its resemblance to The Last Cattle Drive, well, that is another story. Unforgiven, the definitive revisionist cowboy flick, was 1992. So, in 1977, Last Cattle Drive was the first novel to show contemporary 20th century life since Willa Cather.
A major accomplishment of The Last Cattle Drive is its update of the cowboy story. This is a classic United States story, as unique as jazz. The loner hero, the vagaries of weather and critters, the challenges of the people—all these are present.
Day roots his novel in storytelling, with love of his characters’ idiosyncrasies. No one is Garrison Keillor average. Leo tries, but he falls in with the stronger characters. Authenticity triumphs over the superficial. Most of all, the cowboy in the story, Jed, leaves a legacy that will live on, even after he dies in the end. People like Bob Day and some present company still push books aside to tell stories at table. New generations will continue this tradition.
Another note—the author Robert Day is very well educated. I remember as a young writer listening to him quote Rousseau, Jane Austen, and Terry Southern. The Last Cattle Drive borrows from Huckleberry Finn, Andy Adams’ fictional Log of a Cowboy (1903), historic documents, and pulp westerns. It is a sophisticated piece of writing that foretells the mashups and metafictions that are common today. He relishes blending high and low cultures in this well-wrought book.


This is a book that has reflection, wisdom, action, payoff, and warm characters. It made me feel more secure in my identity as a grasslands person when I first read it, and it influenced me as a writer tremendously. I have kept my region foremost in sight, and I have tried to maintain authenticity. I remember when Bob spoke to a Washburn University class decades ago and said he did not follow up the Last Cattle Drive with a sequel, because his writing did not take him that direction. He has remained true to his stories above all. That is a feat of heroic stature, worthy of Jed and all the cowboy ancestors.
Posted by Denise Low at 12:24 PM