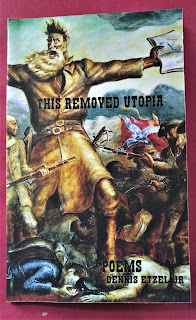 Dennis Etzel is one of the most exuberant poets I know. His readings are enhanced by his genuine love of
words/poetry/just causes/people. His partnership with wife Carrie as they raise 5 young sons is admirable. His awareness as a man raised by two lesbian mothers carries over into his life and his writings. He is an admirable human being, which is one aspect of him; he is also an admirable poet. Yes, he is a friend, so qualify my review in those terms.

His new book from Spartan Press is This Removed Utopia: Poems.  Yes, that is John Brown on the cover, the odd iconic activist saint of Kansas, from the state capitol building's murals by John Stuart Curry. This panel is entitled Tragic Prelude, apt for the book. Etzel has a fluid, unpretentious style that moves, engages the reader, and ess-turns into unexpected alleyways and cupolas. Domestic moments transform into regional awareness into history into rage against corporate machines. The book has six poems, including the long poem “A Short History of Topeka,” which includes this section, and the “Sam” is governor and former senator Sam Brownback:
Even Topeka has the pleasure of lawn and trees
outside of the mall’s obvious entrances, a carefree
winking after paid-off early retirements
help corporations in they syrupy blurs. Accept
that speed walking which hammers gerunds
into our language, promising the assertive
round of elegies. How does the need to claim
on your right feel to Kansas politics, the words
you use, your cushioned lips, those kisses
you tell? Do I need to mention Sam
in the midst of this ruin built decades ago?
Let the sun come through the dome window, 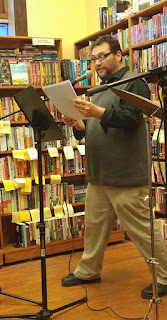 Let the doves of love fly above that window,

let the window resign to the floor, let hammers
be heard, unseen for comfort to our particles.

For a signed copy of This Removed Utopia, please use this link. Shipping and taxes included.

​Dennis Etzel Jr. lives with Carrie and the boys in Topeka, Kansas where he teaches English at Washburn University. He has an MFA from The University of Kansas, and an MA and Graduate Certificate in Women and Gender Studies from Kansas State University. My Secret Wars of 1984 (BlazeVOX 2015) was selected by The Kansas City Star as a Best Poetry Book of 2015. Fast-Food Sonnets (Coal City Review Press 2016) is a 2017 Kansas Notables Book selected by the State of Kansas Library.  This Removed Utopia (Spartan Press 2017) was published as part of the Kaw Valley Poetry Series. My Grunge of 1991 is forthcoming (BlazeVOX 2017). He has two chapbooks, The Sum of Two Mothers (ELJ Publications 2013) and My Graphic Novel (Kattywompus Press 2015). His work has appeared in Denver Quarterly, Indiana Review, BlazeVOX, Fact-Simile, 1913: a journal of poetic forms, 3:AM, Tarpaulin Sky, DIAGRAM, and others. He is a TALK Scholar for the Kansas Humanities Council and leads poetry workshops in various Kansas spaces. Please feel free to connect with him at dennisetzeljr.com.

Photo of Dennis Etzel at the Raven Bookstore by Denise Low